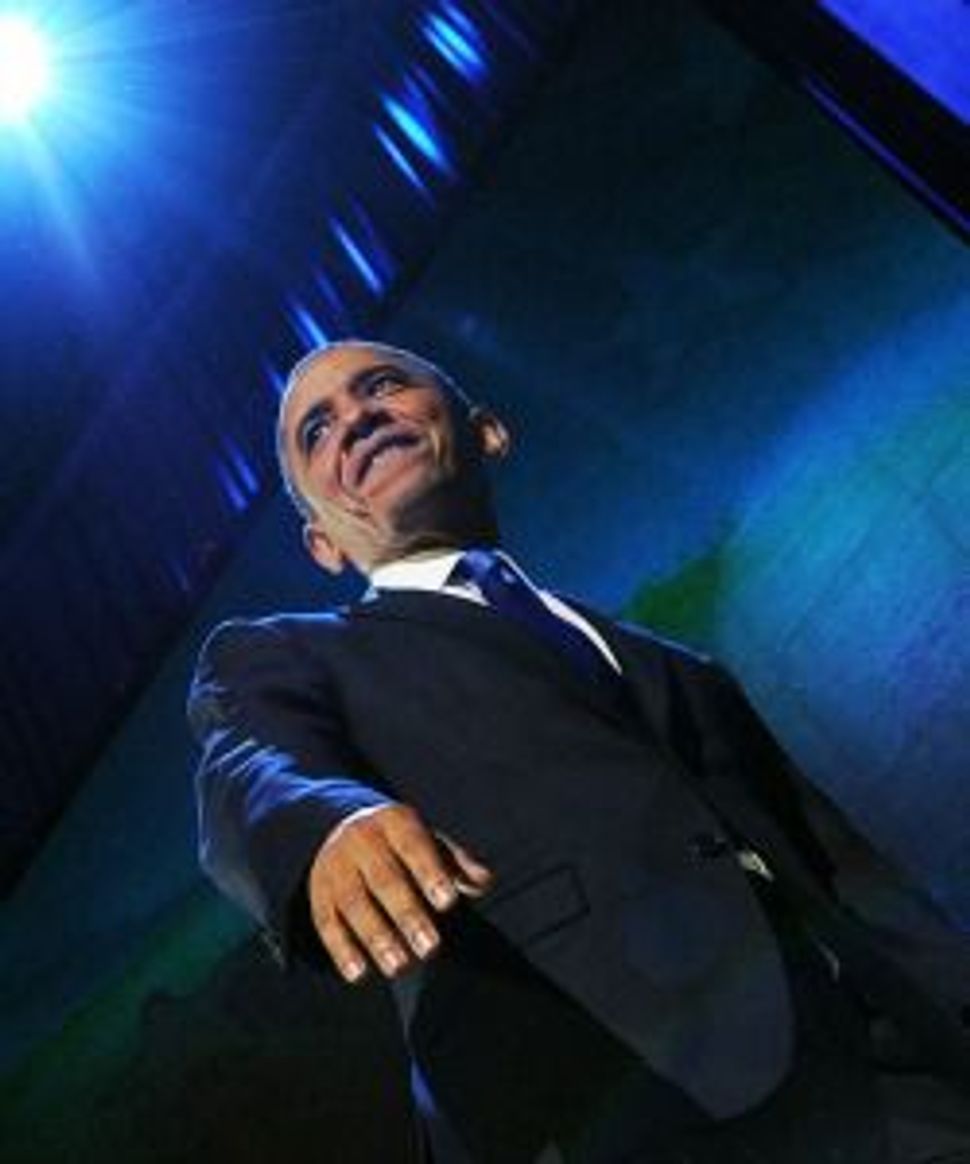 American liberals are deservingly jubilant. Our standard-bearer has been reelected, liberal heroes such as Tammy Baldwin and Elizabeth Warren have won their elections, and marriage equality triumphed in all four states where it was on the ballot. And while Congress remains divided much as it was in the previous term, important trend lines show the fragility of right-wing coalitions between white men, Christian conservatives, and other minority groups. As America grows less white and less rooted in the previous century’s values, this election bodes well for 21st century liberalism.

Statistically speaking, most Jews are likewise rejoicing. According to our best data, the Jewish political needle barely moved in 2012. Most Jews remain socially liberal, and either believe that President Obama is a strong supporter of Israel, or don’t rank that issue atop their personal-political agendas.

Meanwhile, hawkish-on-Israel candidates lost across the country: Josh Mandel to Sherrod Brown and Joe Walsh to Tammy Duckworth. That dog just don’t hunt anymore. It’s not that these elections were referenda on Israel, of course. There are other, more important, issues – and in some cases, the purported differences between the candidates were illusory. But then, that’s part of the point.

For some establishment Jews, this may feel like a rude awakening. The many professional Jews who regard “Barack Hussein Obama” as some kind of existential threat to Israel may be scratching their yarmulked heads. Likewise those Americans living in Israel who voted disproportionately for Romney. Why are American Jews so obstinate? Why can’t we see? Have we lost our love of Israel?

In many Jewish-establishment circles, the problem is chalked up to ignorance. Most Jews just don’t get enough Israel education. They don’t see how beautiful Yemin Moshe is, don’t appreciate how the Israel Defense Forces is so good to vegans and gays. (Forward readers may be familiar with the latter propaganda campaign; strangely, the former has been getting some renewed attention lately on social media.)

And so, the establishment says, let’s find a way to reach these unenlightened and unaffiliated masses. Let’s ensure that college campuses are “safe spaces” for pro-Israel views, and let’s ensure that voices we disagree with are excluded from the Jewish conversation. After all, there’s nothing that turns mainstream Jews on like censorship, right?

These election results suggest that the Jewish establishment is an echo-chamber – a bubble, if you will, of highly vested individuals who are not listening to the wider Jewish community. Hawkish, pro-Israel folks make up a disproportionate percentage of Jewish philanthropists and professionals. This makes sense: if you choose to devote your dollars or your career to a particular ethnic group, you’re more likely to be particularistic, and imbibe that group’s narratives to the exclusion of others. The rightward tilt of the Jewish institutional world isn’t sinister; it’s inevitable.

But it does look a little foolish right now. Hawkish Jews talk excitedly to one another like college students on Facebook, unaware that the people they’ve blocked from their news feed are more numerous than they are, and more informed than they think. They watch Hawkish media, read Hawkish books, and actually believe that there is a right-wing consensus in their community. After all, who doesn’t agree with Dan Senor?

Well, turns out a lot of people, including most Jews. The Jewish bubble, like other conservative bubbles, was burst yesterday. Not only did America vote for the Kenyan Socialist, but American Jews did as well. And they even elected “anti-Semites” who support moving slowly (but resolutely) on Iran and moving deliberately (but securely) toward a Palestinian state.

This happened not because of ignorance, and not because of Jewish self-hatred, but because outside of the right-wing echo chamber, mainstream American Jews voted their values, and didn’t believe the incredibly heavily funded propaganda that tried to scare them on Israel and other issues. Most Jews simply do not live in the bubble of the professional-Jewish ‘consensus.’

One of the most telling moments in last night’s election drama was the period in which the Romney campaign refused to concede Ohio to Obama. Rachel Maddow, brilliant as always, situated this refusal in the context of a multi-year Republican denial of the facts: about evolution, about how the female body works, about climate change, about the (non-)effects of tax cuts for the wealthiest, about the unemployment rate, about poll data in the presidential rate. In each of these cases, when facts contradicted Republican ideology, Fox and the Republicans attacked the facts. They “corrected” the polls in Ohio, squashed the Tax Policy Center’s report on tax policy, and have built an enormous edifice denying climate change. The Romney campaign’s incredulity that it might actually have lost, Maddow said, was symptomatic of this denial of reality. After all, hadn’t Fox News been saying for weeks that they were going to win?

This election should serve as a wake-up call for those in the Jewish community who similarly seek to deny the reality of Jewish public opinion or the reality of the Israel/Palestine conflict. Yes, at certain conferences and institutions, everyone agrees with you. But outside your bubble, those whom you purport to serve — and to represent — have a far broader range of vision.