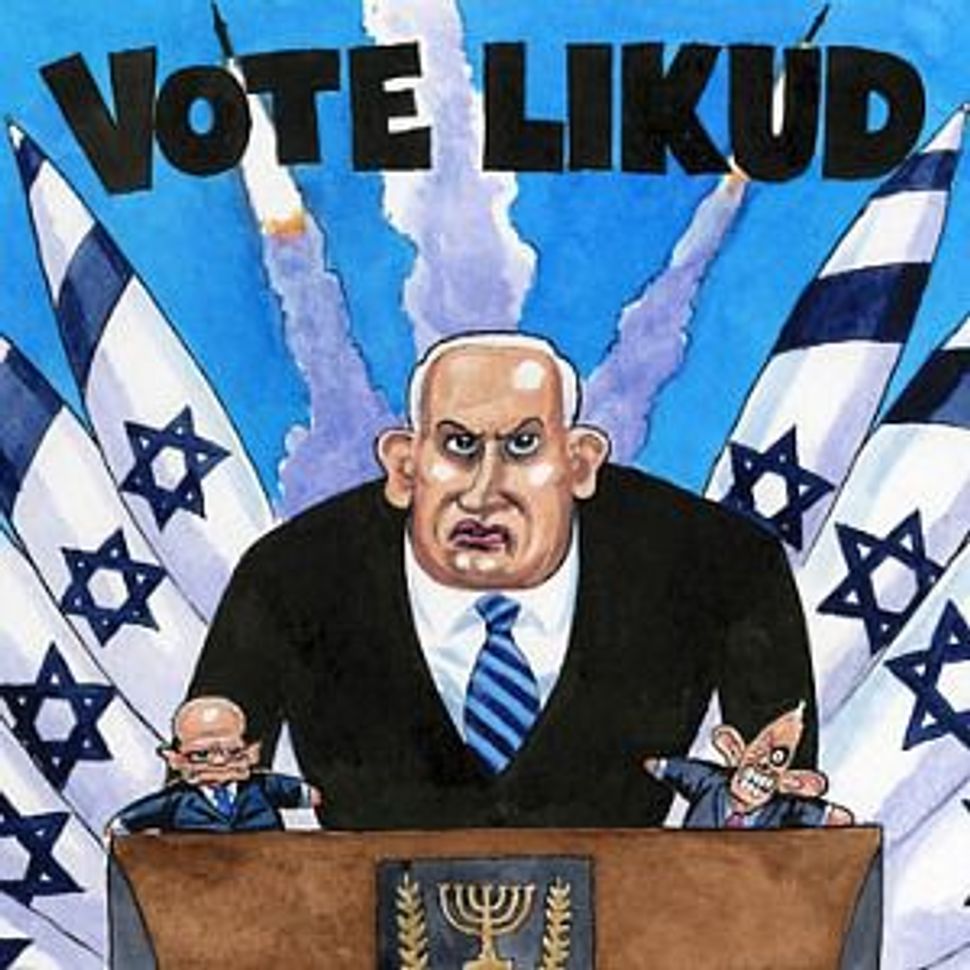 For a cartoonist, how to say “Jews are controlling international affairs” without actually having to say it?

Well, the creation of Israel has made it very easy in this regard. Just replace ‘Jews’ with ‘the Israel lobby’ (or ‘Israel’ itself) and substitute ‘the United States’ or maybe ‘the United Nations’ for the usual ‘international government’ or ‘global finance’, and you’re good to go. And, if you can throw in an image of a prominent Israeli looming large over the scene, perhaps controlling world events as a puppeteer might work his instruments, even better.

The Guardian’s Steve Bell in today’s paper has done just that. His creation portrays an oversized, slightly hunched image of Benjamin Netanyahu, flanked by a phalanx of rockets decked in the blue and white of the Israeli flag, standing at a lectern with his hands mastering two small dolls. On the left is William Hague, the United Kingdom’s Foreign Secretary who has said that Hamas bears the “principle responsibility” for ending the violence in the region, and Tony Blair, the Middle East Peace Envoy for the Quartet, on the right.

Bell’s canard has been swiftly condemned. The Community Security Trust – the organisation responsible for the protection of the UK’s Jewish community – stated, “What is striking about Bell’s cartoon is that he seems to have reached for the ‘puppeteer’ trope to explain that fact that William Hague’s statement on the conflict was presumably not critical enough of Israel for his liking, as if this is the most plausible explanation for Hague’s view.” The Jewish Chronicle is reporting that the barrister Jeremy Brier has already lodged a complaint with the Press Complaints Commission, labelling the drawing “plainly anti-Semitic.”

When it comes to matters Israeli and Palestinian, The Guardian maintains a transparent editorial slant, one which favours highlighting the injustices perpetuated against Palestinians over those inflicted upon Israelis. I know this to be a fair perception because I can read. There is nothing necessarily heinous about this. After all, a news organisation is free to maintain any editorial bias it wishes. In doing so, it is only reflecting the sensibility of its readership, provided it does so within certain boundaries of taste, civility, and fair play.

This cartoon, however, is a clear instance where to say The Guardian has crossed the frontier between decency and obscenity would be to understate things. Here, the paper has lent its imprimatur to something that is so crassly anti-Semitic, that reinforces one of the worst tropes people have used against the Jewish people for hundreds of years, one has to wonder how on Earth it got through the various stages of the editorial process.

What’s worse, for The Guardian at any rate, is that this comes almost one year after the reader’s editor has forced to issue clarification to its writers on how to use language when discussing Israel and matters of Jewish concern.

The spark on that occasion was an especially disgusting column by Deborah Orr, which asked why “so many Zionists believe – that the lives of the chosen are of hugely greater consequence than those of their unfortunate neighbours”. The clarification said in part:

Anti-Semitism can be subtle as well as obvious. Three times in the last nine months I have upheld complaints against language within articles that I agreed could be read as anti-Semitic. The words were replaced and the articles footnoted to reflect the fact. These included references to Israel/US “global domination” and the term “slavish” to describe the US relationship with Israel; and, in an article on a lost tribe of Mallorcan Jews, what I regarded as a gratuitous reference to “the island’s wealthier families”.

Whatever happened to that? On this and other matters, The Guardian’s press department were sought for comment. None has been forthcoming.