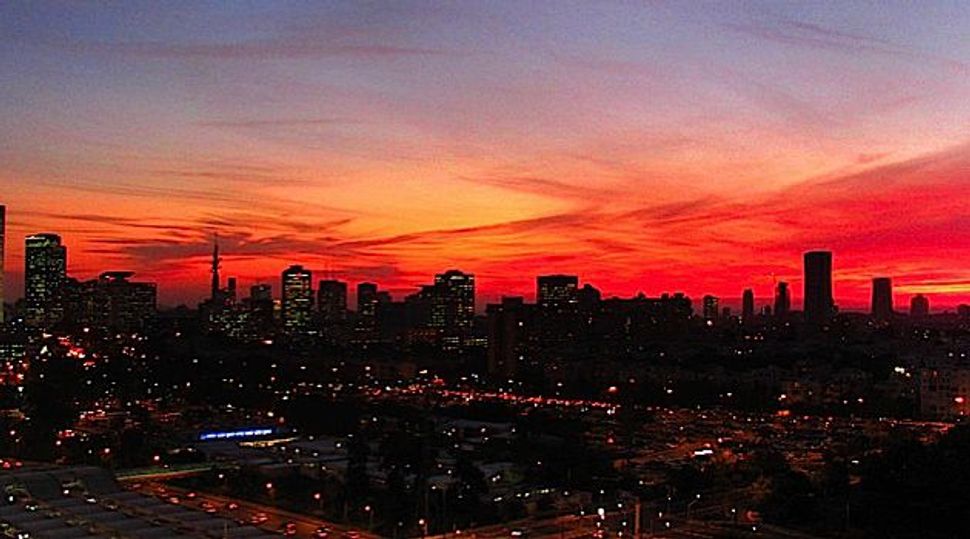 Post Brunch: Tel Avivians prefer to deal with reality after a nice meal. Manor asks, ?Is there any other way?? Image by Wikicommons

It was Woody Allen’s split screen in the 1977 classic “Annie Hall” that gave the world an inside look at Jewish family meals. I was attending such a meal Saturday, November 17, in Tel Aviv when, between my aunt’s gossip about her neighbor and my uncle’s analysis of his ulcer, sirens rang out warning of an impending rocket launched from Gaza. As we made our way down to the bomb shelter, I realized that this would be my 5-month-old nephew’s first visit to a shelter. Given the reality in which we live, it felt like a bizarre rite of passage.

Those sirens were the first to be heard in Tel Aviv since the 1991 Gulf War. Throughout the past decade, as the southern part of Israel was frequently attacked by rockets, Tel Aviv was seen as an island, entire of itself. Inhabitants of the city were often accused of self-indulgence, eating at gourmet restaurants while parts of the country were at war. Some referred to the city as a bubble, others as an Iron Dome of hedonism.

Many believed that only Hamas would be capable of bursting the Tel Aviv bubble. As I emerged from the shelter and made my way home, I, too, thought that the scene would be reminiscent of that which opens “Breakfast at Tiffany’s,” of a dormant Times Square decorated only by Audrey Hepburn’s elegance.

Yet the scene in Tel Aviv is quite different. The streets are filled with people, the bars are struggling to keep up with demand and the cafes are still serving the finest cappuccino this side of the Suez Canal. For it is not hedonism that characterizes this city, but rather an unrelenting desire to remain an island of sanity amid the insanity of war, a place of culture and thought in a region burdened by faith and history. It’s not that we are unable to face reality, but that we choose to do so after Sunday brunch.

When you think about it, is there any other way?

Ilan Manor is finishing his mass media studies at Tel Aviv University. He blogs regularly for Haaretz.com and for Times of Israel.