Where Gaza Has Left Us 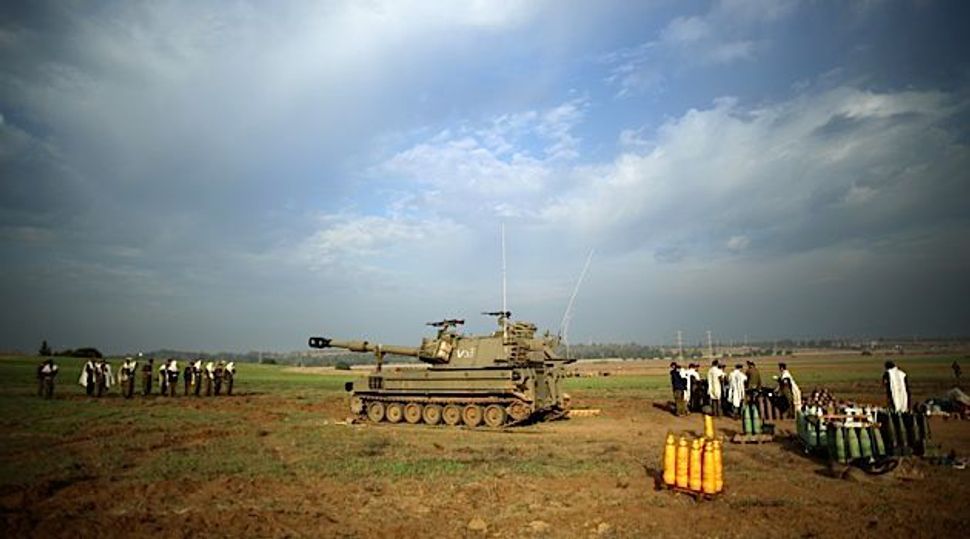 Quiet After the Storm: Israel soldiers pray near the Gaza border the day after the ceasefire went into effect. Image by Getty Images

Now that the fog of war over Gaza has lifted and the ceasefire appears to be settling in, a number of strategic questions and lessons emerge. Many are relevant not just to the Israel-Hamas confrontation.

Perhaps most ominous for the future of the region, and most puzzling, is the impression left on Israel’s enemies by Israel’s performance in the war — the disciplined behavior under fire of the Israeli public, the high rates of interception by Israel’s missile defenses, the IDF’s admirable reluctance to endanger Gazan civilians, and a leadership that knew when to stop.

What Israel thought was a success was seen by Iran and Hezbollah as a sign of weakness.

Note, for example, the postwar statement of Ali Baqeri, undersecretary of Iran’s Supreme National Security Council: “When the Zionist regime can’t stand the resistance in the blockaded Gaza Strip, it is clear that it will definitely have nothing to say when it comes to the power and strength of the Islamic Republic.” Or Hezbollah’s Hassan Nasrallah: “Israel, which was shaken by a handful of Fajr-5 rockets during eight days, how would it cope with thousands of rockets which fall on Tel Aviv… if it attacked Lebanon?”

These and similar bombast, some even from Gaza, would appear to call into question the deterrent value of Israel’s achievements in Operation Pillar of Defense and to suggest that another, bigger war may not be far off, if only due to enemy miscalculation.

Unless it’s all bluster. Note that Hezbollah did not intervene in this war. Indeed, Hezbollah has not fired a single rocket at Israel since the summer 2006 Second Lebanon War, which was roundly criticized in Israel and the Middle East as an Israeli strategic failure. And Hamas is now maintaining a total ceasefire and keeping its civilians away from the border fence.

Perhaps a healthy dose of bombing and destruction on Israel’s part does indeed induce second thoughts on the part of its non-state, Islamist-terrorist enemies, despite the tone of their rhetoric and their insistent predictions of Israel’s ultimate disappearance. A number of Israeli military thinkers are now postulating that this is in fact the only viable strategy Israel can adhere to: a periodic painful reminder, delivered with minimal civilian losses and by increasingly efficient tools of both offense and defense that Israel is undaunted by Islamist terrorism.

The Gaza war’s principal local political outcome was the further legitimization of Hamas rule in the Gaza Strip, a further expression of political Islam’s viability in the Palestinian sphere as well as elsewhere in the Arab world. The conflict also sent a critical message to the Israeli public and the Obama administration: Much as you might wish it, the Palestinian question will not go away. Other issues in the Middle East like the revolution in Syria and the stabilization of Egypt might seem more urgent. But the Israeli-Palestinian conflict is still central.

Hence the last minute American and Israeli decision to acquiesce to the West Bank leadership’s bid for non-member observer state status at the United Nations. It is being seen as a chance to boost the prestige of the moderate PLO in its competition with Hamas. And the last minute reentry into the Israeli political arena of Tzipi Livni, who almost alone in this Israeli election champions the peace process.

Another important set of strategic lessons generated by this mini-war concerns the way other interested parties dealt with it. Look how tiny Qatar punched way beyond its weight in helping to mediate a ceasefire, thanks to its money and Al Jazeera. Of course, the real mediator was Egypt. Indeed, the subtext of the entire conflict for both Israel and Hamas was the behavior of Egypt’s Muslim Brotherhood leadership.

The ceasefire produced by the Egyptian army under President Mohamed Morsi has managed thus far to satisfy both parties as well as the U.S. (though a large portion of the Egyptian public is now furious over Morsi’s subsequent usurpation of dictatorial powers; but that’s a different story). Still, for Israel, Morsi’s real test lies ahead: preventing the smuggling of more lethal weapons into Gaza and thereby preventing another Hamas-Israel war in the near term.

President Barack Obama chose to deal with the Gaza fighting by once again rather effectively “leading from behind,” this time from East Asia, a part of the world on which his administration has placed a higher priority. He badgered Morsi into acting and Benjamin Netanyahu into not invading. What, if anything, he will do in the coming months about a two-state solution — or even, in view of Hamas’ permanency in Gaza, a three-state solution — remains the looming question.

Yossi Alpher is former director of the Jaffee Center for Strategic Studies at Tel Aviv University. Until recently he coedited the bitterlemons.net family of internet publications.

Where Gaza Has Left Us