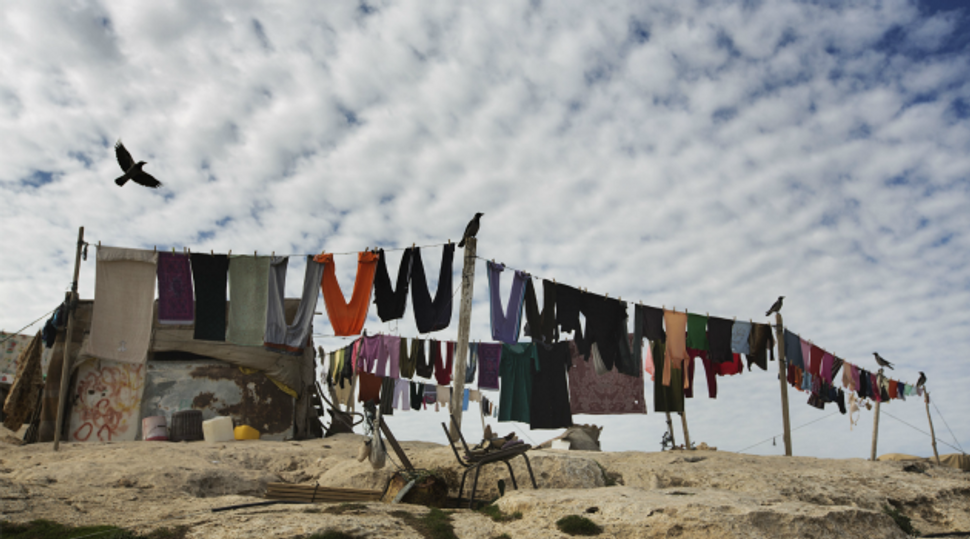 E1 Silence: Israel?s decision to allow settlements in the E1 area of the occupied West Bank is a slap in the face of the two-state solution. So why aren?t American Jews speaking out about it? Image by getty images

Overwhelming silence. That’s been the public stance of the leaders of most major American Jewish institutions since the Israeli government announced that they were reactivating plans to construct a new settlement in the area of East Jerusalem known as E1. This absence of public response represents a missed opportunity for leadership on an issue that threatens both the vital relationship between Israel and the United States and the very future of the Jewish state.

Constructing settlements in E1 almost definitely destroys hopes of ending the occupation, which violates the human rights of Palestinians and threatens the long-term viability and security of Israel. Since E1 links East Jerusalem with the West Bank, Israeli settlements there would literally present an obstacle to a two-state solution. While final plans have not been released, previously-proposed plans suggest that such settlement will probably also limit Palestinians’ freedom of movement, restrict access to private agricultural land, and displace the Jahalin Bedouin living in the area.

Today, virtually every major Jewish organization publicly voices support for the creation of a Palestinian state. However, our leadership cannot profess commitment to this solution while closing our eyes to actions that undermine this very possibility.

NEWS UPDATE: The Union for Reform Judaism said it opposes the Israeli decision to build new settlements, “especially in the critical ‘E1’ area” of the West Bank. The declaration came in a policy document that addresses fallout from the Palestinian statehood bid at the United Nations.

The announcement of plans to build in E1 is a slap in the face to the United States, Israel’s closest and most important ally. The U.S. just recently stood with Israel in being one of the only major countries to oppose the Palestinian Authority’s bid to elevate its status to “non-member observer state,” and even used political capital to persuade other nations to vote no or abstain.

President Barack Obama strongly and publicly supported Israel’s right to defend itself in the face of rocket attacks by Hamas, while financing the Iron Dome system that saved Israeli lives. Construction in E1 would violate repeated commitments to the United States, dating back to 1994, not to build settlements in the area.

American Jewish communal leaders — including heads of major institutions, rabbis, and local leaders — have a historic opportunity to respond to these new developments by taking leadership on three fronts: vis-à-vis the Israeli government, the American government, and our own communities.

The Israeli government has a history of responding to concerted pressure by the American Jewish community. Usually, such pressure has focused on questions of religious pluralism within Israel. But if the most visible leaders of the American Jewish community made clear that we want settlement to stop, and real peace talks to begin, perhaps the Israel government would be moved to listen. As a community, we invest millions of dollars a year in Israeli society, and work hard to ensure bilateral support for a safe and secure Israel.

Within our own communities, Jewish leaders must do a better job of helping our constituents to understand the hard choices that will no doubt be required for a lasting peace.

This standoff takes place in the week that Jewish communities read the Torah portion that tells the story of the painful split between Joseph and his brothers. This is a story in which every character abdicates responsibility for his own contribution to the family rift. Jacob openly shows favoritism to his son Joseph. Joseph flaunts his role as favorite son. The brothers seize an opportunity to sell Joseph into slavery in Egypt.

But the story doesn’t end here. After Joseph achieves his position as second-in-command to Pharaoh, his brothers journey to Egypt in search of food to sustain them during a famine. Joseph reveals himself to his brothers, and they shudder with fear. They assume that their now-powerful brother will take revenge on them for their betrayal of years before. Instead, Joseph seizes the opportunity for leadership. He reconciles with his brothers, provides them with food, and finds them a safe place to live. By moving beyond blame, Joseph succeeds in achieving a lasting peace with his former adversaries.

Within the American Jewish community, we are good at pointing fingers to explain why we have not yet achieved peace between Israelis and Palestinians. We blame the Palestinian leadership for their internal fractures, for their failure to accept previous peace deals, for the unjustifiable terrorism that marked the Second Intifada, and for the approach to the U.N. There’s certainly reason to say that the Palestinians and their leadership have made mistakes. But pointing fingers gets us no closer to any resolution of conflict.

I am proud to call myself a Zionist. For me, Zionism means the right for Jews to live in a safe and secure state in the Land of Israel. It means that we have a refuge from oppression and a promise that the Holocaust cannot happen again. But Zionism also means taking hold of history. For thousands of years, history was something that happened to the Jewish people. Other nations invaded our land, expelled us, and massacred us. Zionism offers a new possibility, in which Jews make our own history. This new power demands that we refuse to stand back and simply blame others — even when others make mistakes. Instead, we should always be asking ourselves what we can do to create a better future for our own people and others.

Today, it is time for those of us who consider ourselves Jewish leaders to take leadership by demanding that Israel protect human rights and preserve the possibility of long-term peace.

Rabbi Jill Jacobs is the Executive Director of Rabbis for Human Rights-North America. Her most recent book is “Where Justice Dwells: A Hands-on Guide to Doing Social Justice in Your Jewish Community” (Jewish Lights, 2011).