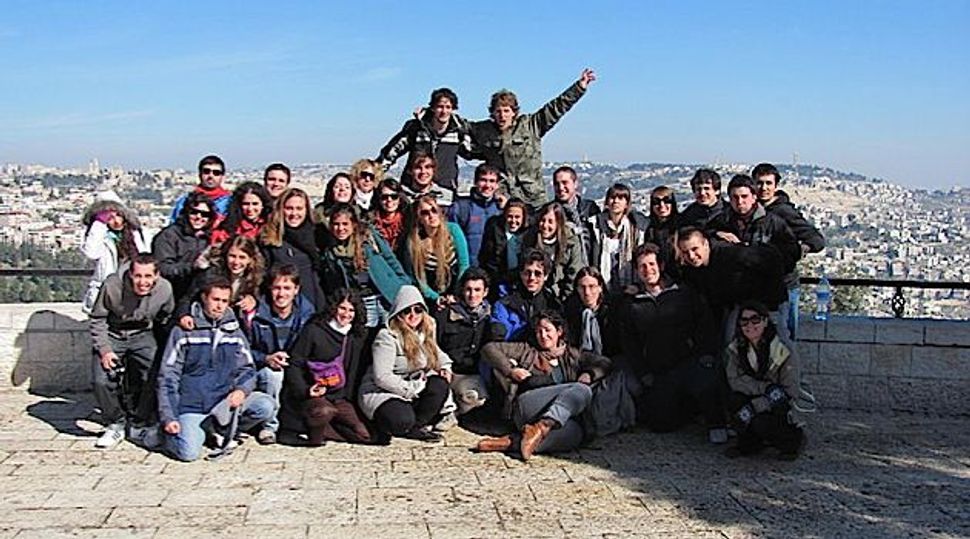 Effective?:Are Birthright trips the solution to a dwindling interest in the Jewish state? Image by Wikicommons

Over the past year or so, alert readers have noticed a furious debate has erupted among our leading professors and pundits over the changing relationship between young American Jews and the State of Israel. It’s been a knock-down, drag-out fight among the experts, filled with name-calling and high-stakes drama. Amazingly, the combatants are mostly looking at the same numbers. They simply can’t agree on what it means.

Is it true, as the surveys suggest, that young Jews are distancing themselves from Israel, tuning it out and backing away? Or are we, as some experts argue, looking at a sampling error? Are we witnessing a historic process of declining Jewish attachment to Israel, as Steven M. Cohen and Ari Kellman argued in “Beyond Distancing,” or is this merely a phase that kids go through and grow out of, as Leonard Saxe, Charles Kadushin and Ted Sasson of Brandeis University maintain? Are the youngsters unhappy with Israel because of the things it does, as Peter Beinart wrote in “The Crisis of Zionism,” or are they just too assimilated to care, as everyone else insists?

Delving into the statistics and seeing how the various experts reach their conclusions can be a fascinating exercise, if that’s your idea of a good time. The basic facts are straightforward. Each successively younger age cohort tends to express a weaker attachment to Israel than the one above it. Intermarried Jews and their children are, by and large, less attached to Israel than the in-married. More religiously observant Jews are more attached.

Still, these are only numbers. They represent yes-or-no answers given anonymously over the phone or posted on line. We can’t hear the respondent’s tone of voice or see the look on their face. Each percentage point contains a thousand human stories.

If you want to bring those stories to life, there’s nothing like traveling around the country and talking to your fellow Jews face to face. If you have a chance to talk with a group of people, tell them stories and get them to open up, you can learn a lot.

I’ve been getting around quite a bit over the past few months. I wouldn’t call the folks I’ve met a scientific sample, but they cover a pretty broad range of ages, shapes and sizes. I’ve spoken at Israel Bonds dinners in Philadelphia and San Antonio and at J Street campus events in Providence and suburban Washington, D.C. I’ve addressed congregations during services in New Jersey and Minnesota and fielded questions in Jewish community centers in Los Angeles, Boston, Manhattan and Memphis. Wherever I go, I try to listen as much as I talk.

Here’s what I’ve learned: Folks are worried. They see Israel under attack and it scares them. They see Jewish college students — their children and grandchildren, their classmates and siblings — withdrawing into a shell, unwilling or unable to engage. What they see makes them fear for the future of their Jewish communities.

Is this disengagement connected to the headlines? That’s how it feels to them. They read about Israelis moving to the right, about restrictions on the civil rights of Israeli women, Arabs, political dissenters, religious liber als, and they feel queasy, uncertain what to think, how to feel. They see the news reports about deaths in Gaza and they wonder how many American Jews will condemn and turn away, whether their children, their neighbors — even they themselves — will continue to love Israel. There is a deep unease out there.

The message they typically get from their rabbis and community leaders, they tell me, is that Israel is right and its critics are wrong. That doesn’t always sound right to them, but on the other hand, you don’t want to be siding with the bad guys. Of course, it’s possible to love a country — like a spouse — without necessarily endorsing everything it does. But that’s not an easy balance to find when everyone around you tells you it’s wrong.

Scholars may read the surveys and conclude that distancing from Israel is just a byproduct of assimilation, that it has nothing to do with unease over the headlines. But that’s not necessarily what the Jews out in the trenches are experiencing. They don’t have scientific research to back up their perceptions, but they do have kids coming home during semester break and telling them what they hear on campus and how it makes them feel. Most of the time, it appears, the kids aren’t angry at Israel for the things it’s accused of, so much as embarrassed.

The ones who care enough to be angry may decide to do something about it. They might join an AIPAC campus group to defend it or J Street to change it. Some will be angry enough to join a boycott campaign. Most, though, will probably tune out. Undergraduates don’t want to look uncool.

Is assimilation causing distancing? Partly. To some extent, though, it’s the other way around.

Finally, we should note one surprising point that the pollsters have found. In recent years, the steady decline in attachment to Israel — the percentage of non-Orthodox respondents saying they feel “very close” to Israel — shows signs of reversing itself in the youngest age group. That is, Jews between ages 55 and 65 are less attached than those over 65, those between 45 and 55 still less so and those aged 35 to 45 even less. But Jews under 35 are markedly more attached. They look more like the 55-year-olds.

This has shown up in enough surveys to be deemed a trend. Nobody is sure why, but the only plausible guess so far is Birthright Israel. Those 10-day free trips seem to be having a lasting effect on the coming generation.

But a curious thing showed up in one recent survey, conducted last spring for the Workmen’s Circle by Steven M. Cohen and Samuel Abrams. They found that while attachment to Israel shoots back up among those under-35s, trust in Israel’s government does not. Surveys show that belief in the Israeli government’s sincere commitment to peace follows an age-related decline, parallel to the decline in attachment. Under-35s bounce back up in attachment, but not in trust. Apparently, nobody had to tell them how to love without liking. They’re figuring it out for themselves.