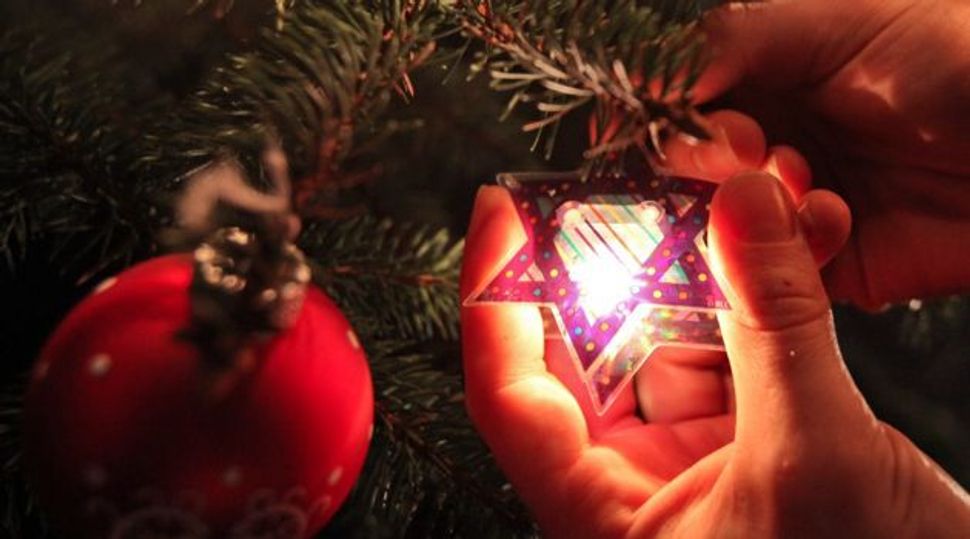 Hanukkah Bush: Is it an abomination or part of the tradition?

Like many American Jews I know — and like almost all New Yorkers — I find Christmas in Manhattan deeply evocative. I like the smell of Christmas trees and candied nuts, and I like the way Central Park twinkles, and I like the red-and-white holiday markets that pop up like sukkahs all around the city. Despite the inexorable (and unanswerable) questions that they raise about belonging and otherness, the truth is, I look forward to these things each fall.

I say this as a committed, observant Jew and as a future rabbi. As someone who spends a great deal of time engaged in ritual, there are a handful of ritual moments that — year in and year out, and regardless of where I am physically, emotionally or spiritually — never fail to move me. The beginning of ma’ariv on the first night of Rosh Hashanah, is one. The smell of latkes is another. And the first time I hear the rum-pum-pum-pum of “The Little Drummer Boy“ is a third.

The fact is that Hanukkah menorahs and Christmas trees, “Maoz Tzur” and “Jingle Bell Rock,” potato pancakes and chow mein have become intertwined in the seasonal consciousness of American Jews. And while a great many contemporary Jewish voices go to great lengths to convince us that Hanukkah is not the “Jewish Christmas,” I would argue, from both a historical perspective and a spiritual one, that such protestations do a disservice to the very traditions they venerate.

The truth is, close readings of the Book of Maccabees (along with early rabbinic accounts of Hanukkah) reveal a holiday that, even at its inception, was largely about assimilating various external ritual traditions into the Jewish fold. It’s true that Hanukkah’s mainline foundational myth celebrates the triumph of religious purity over and against foreign influence. We all learned in Hebrew school that wicked Greeks sought to profane our Temple and that the righteous Maccabees rebelled and emerged victorious. But like most things we learned in Hebrew school, the adult version is considerably more complex. As it turns out, the cultural situation in the ancient Near East, like ours in the postmodern West, was actually quite cosmopolitan. And as the Book of Maccabees attests, the conflict over the shape of life in ancient Judea was inflamed not just by foreign rulers, who “caused many evils on the earth,” but also by the Jews who “built a gymnasium in Jerusalem.”

Moreover, in its earliest iterations, Hanukkah wasn’t even the Festival of Lights. The story of the miraculous cruse of oil that burned for eight days shows up only in the Babylonian Talmud, which wasn’t composed until 500 or 600 years after the Maccabean revolt. Instead, according to the earliest sources, Hanukkah was more like a made-up Sukkot, during which Jews could bring sacrificial offerings that they were unable to bring during the war.

Following a line of thought advanced by the Israeli Talmud scholar Moshe Benovitz, it appears that lights came only later, when King Herod — who, for political reasons, was always trying to straddle his Roman and Jewish identities — sought to combine early Hanukkah legends with the Saturnalia light festivals of the ancient world. In order to valorize Temple renovations that were completed during his reign, he inaugurated the “Days of Herod,” a lamp-lighting festival that was born of Maccabean legend, Saturn worship and political self-aggrandizement. By name-checking the Maccabees, he sought to pacify his Jewish constituency. By incorporating Saturnalia, he sought to satisfy Rome. And in so doing, he solidified his own self-perception as a leader who traveled in both worlds.

To make this point a little sharper, there is a famous talmudic disagreement between Beit Hillel and Beit Shammai about whether the number of lamps (that is, candles) increases or decreases as Hanukkah progresses. The Hillelites say we should light one more each day, whereas the Shammaites say we should light one fewer. Benovitz argues that the disagreement, at base, reflects divergent rabbinic attitudes about how and to what extent Jewish ritual ought to reflect the ritual practices of the surrounding culture.

As both Herod and Hillel were well aware, winter lamp-lighting holidays were common throughout the ancient world, a historical reality that scholars believe influenced the timing of Christmas, as well. And like most ancient lamp-lighting festivals, Saturnalia observances required a greater number of lamps each day, symbolically increasing the overall light as the days got shorter. Whereas Beit Shammai advocated a form of Hanukkah that was in direct opposition to Saturnalia, Beit Hillel offered a more accommodationist approach, which forms the basis of the Hanukkah ritual we know.

So is Hanukkah the “Jewish Christmas”? All too often, Jewish leaders respond with a knee-jerk “No!” But if by ”Jewish Christmas” we mean that Hanukkah represents a concerted effort to confront cultural difference not with a posture of rejection, but rather with one of curiosity and sharing, I would argue that we might do better to respond with a thoughtful, qualified, “Yes.”

So while I am not going out to buy a Hanukkah bush this year, I recognize that the impulse to do so springs not from the erosion of our Jewish identity, but rather from the delicate business of negotiating our Jewish identity in the postmodern world. This is difficult terrain, but, as Beit Hillel understood, traversing it is a sacred task.

Benjamin Resnick is in his fourth year of rabbinical school at the Jewish Theological Seminary.