Let’s Act on Guns To Avoid Next Newtown 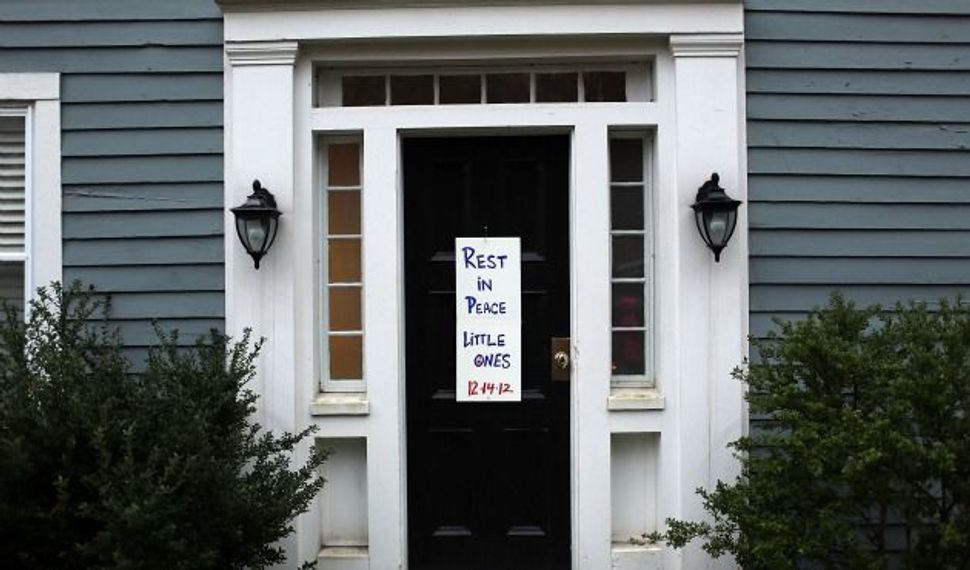 Memorials to the victims of the massacre sprung up around Newtown, Conn. But what will we do to prevent the next mass killing? Image by getty images

It has been 13 years since the murders at Columbine High School, when two teenagers killed 13 people and wounded 21 others. Since that time, ABC reports, there have been 31 school shootings.

“Senseless” seems to be the most frequently used word to describe the awful events at Newtown’s Sandy Hook Elementary School, and senseless it surely was. Still, we hunger for explanation. What can it be that possesses a man to gun down little children, each child shot multiple times? What can we do to protect against such insanity?

Guns, we hear repeatedly, don’t kill people; people kill people. But the weapon of choice for people bent on killing people is a gun. Guns are used in more than two-thirds of the murders in this country. A simple thought exercise: Absent guns, would the number of murders go up or go down? Knives, hands and blunt instruments are inherently less lethal, more intimate and, perhaps most important, more time-consuming.

Yet the easy availability of guns in America is not the whole story. True, the rate of people killed by guns in the U.S. is 19.5 times higher than in similar high-income countries in the world, and true also that 45 percent of Americans say they have a gun in their homes, also a rate not approached in comparable countries. But these figures reflect a cultural difference at least as much as they signify inadequate gun control legislation and enforcement.

Consider, for example, that in Israel, where young men and women — soldiers — move about openly with semi-automatic weapons, there has never been a mass murder. In fact, picking up an armed hitchhiker there is perfectly routine. Hence it is reasonable to suppose that we are dealing here with a cultural phenomenon and not merely with lax gun controls. As New York’s Mayor Michael Bloomberg said in the aftermath, this “only happens in America.”

But identifying that cultural phenomenon is a challenge we have not yet met. Is violence promoted by what we see on television and in movies and video games? The same video games are available in Israel. Is it that our sense of social solidarity is wanting? But explain how a more pervasive sense of social solidarity might have inhibited the deranged Adam Lanza, the slaughterer of Newtown (who used his mother’s legally purchased guns, and shot his mother in the face multiple times). Or James Holmes, who killed 12 people and wounded 58 in a movie theater in Aurora, Colorado. Or Jared Loughner, who murdered six people and gravely wounded then-Representative Gabrielle Giffords in Tucson and twelve others. Or Seung-Hui Choi, who murdered 32 people and wounded 24 more at Virginia Tech. And so on, and so on, and so on.

What rivets our attention and magnifies our sadness in the case of Newtown is, obviously, the tender age of the victim children. It is that which renders the event utterly inexplicable. We may more or less understand the aggrieved employee who opens fire in his place of work or even the perpetrator of lethal domestic violence. But here, no such understanding is available. No comprehensible end justifies such evil means. Nor can we readily suppose that a less porous mental health system might earlier have identified Adam Lanza as a prospective killer.

Is there, then, nothing we can do? Unfortunately, many of the things we can do are either trivial or distasteful. We can amplify security systems, rendering access to schools more difficult. But Lanza, so far as we know, shot his way into Sandy Hook. We can, and should, ban assault weapons, bearing in mind that there is already a vast supply of them. Perhaps we can somehow forbid the NRA from contributing to political campaigns, freedom of speech requirements notwithstanding.

There is no panacea. At the same time, there is no 2nd Amendment right to bear any kind of arms or use any kind of ammunition. It is time and then some for all three branches of government to reflect that in their policies and their judgments. It is already too late for the 20 children of Newtown; it is not too late for what will otherwise be the next grotesque tragedy.

Let’s Act on Guns To Avoid Next Newtown