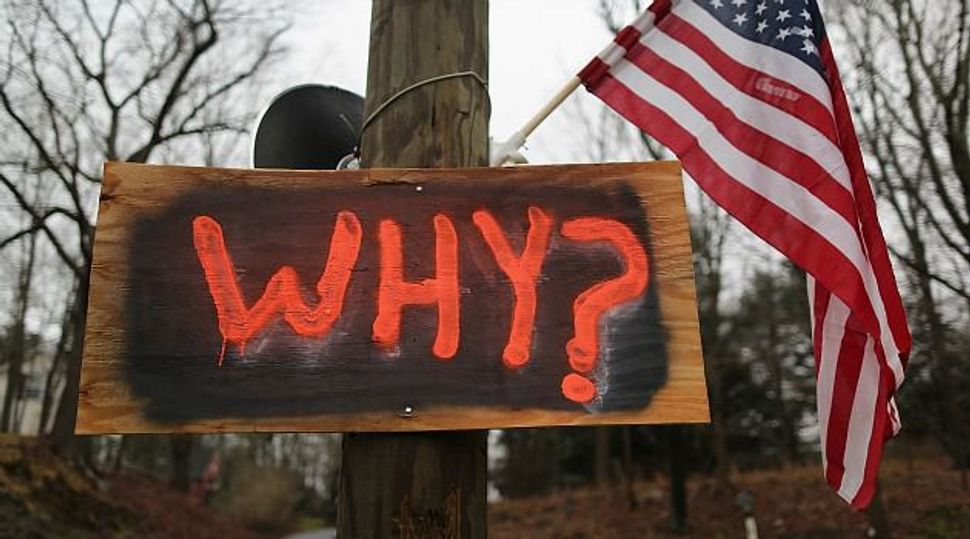 The earth-shattering shock of the shootings at Sandy Hook Elementary School continues to reverberate throughout communities and homes all over America. As the weeks go on, rallies, vigils and proposed legislation will offer opportunities for us to find a way forward. In the midst of these expressions of activism, however, there are still the lingering questions of how we grapple with the inexplicable death of children, those sweet, innocent ones we mourn over and over again.

The first time I encountered the death of a small child was when I was called upon to help a family bury a premature baby. The death was an abstraction until the casket was removed from the hearse, at which point it became obvious that the abyss separating life from justice was real. We built a bridge over that dark space with words of comfort, with shared grief, with our silent presence. “We are here. You will not collapse. Promise.”

The first time I encountered the death of a child was in high school, when a classmate committed suicide. He shot himself with his father’s gun, in bed, late one night. He was Catholic, so he was made up quite well for the wake. The day after the funeral, our sophomore biology teacher made some remark in class about the dead boy looking like a science experiment. Three students ran from the class in tears. The teacher should have been fired for his stupidity and insensitivity. But we were all too stressed out to organize an effort to censure him.

The first time I encountered death’s ability to scare a child for life was one summer night, decades ago. 1970. There’s Mom at the kitchen window. Water running in the sink; crickets outside in the yard; apples ripening, hanging low on the trees, ready. Her back is to us, and she’s crying.

“Thinking of my dad,” she said. And the pastoral landscape of youth was ripped thoroughly through, its horizons twisted into the junk metal of a violent and permanent alteration: the ghost of a man, an illness and a gun. Mom was six in 1939, when a deranged man looking to get back his job murdered her father. A part of her died that day, and she carried that death with her for the span of her entire life. Hers was the trauma never healed.

The first time. And the first time. Again and again. When a child dies, our only response is to treat that death as though we are encountering the phenomenon of a child dying for the first time. Because to inure ourselves to the radical injustice of a child’s untimely end is to deny an essential law of life itself: that life is to be lived; that the intended progression, the evolutionary genius of design, is from conception to birth to growth and maturation and then, to death. A disruption in that cycle requires our full attention, our presence, our hearts’ impossible pain.

My friend Mish Zion recently shared a great text from the Talmud: Rabbi Hama, son of Rabbi Hanina, taught: “What is meant by the passage ‘You shall walk after the Lord thy God?’ Is it possible for a human being to ‘walk after’ the Divine Presence? Rather, what it means is: ‘Follow the actions of the Holy Blessed One. Just as God comforted the grieving, so, too, do you comfort the grieving.’”

The most God-like action we can take in the face of death — most certainly in the presence of one who has lost a child — is to comfort with words, comfort with our presence, build a bridge over the hole in the ground that lies before them.

For some in grief, there is the deepest desire to hear words of ease, to be held close, to be told that their angels have gone to heaven. For others in grief, there is anger and a call to justice. Hayim Nahman Bialik, calling not for revenge but for justice, wrote after the 1903 Kishinev massacre: “No such revenge — revenge for the blood of a little child has yet been devised by Satan. Let the blood pierce through the abyss! Let the blood seep down into the depths of darkness, and eat away there, in the dark, and breach all the rotting foundations of the earth.”

For 73 years after her father was murdered, Mom felt that the foundations of the earth, the system of justice under which we lived, were compromised by laws that favored the rights of gun owners over the innocent lives lost of those who fell victim to a bullet’s searing, piercing blast to the abyss.

Words of comfort and angels didn’t work for her. Laws did. Laws against guns.

The undeniable inexplicability of a child dying — and the possible array of responses to that by the grieving survivors — brings to mind a teaching by Eliezer Berkovits in “Faith After the Holocaust.” He said that some survivors found meaning in their faith, trusting that the full range of evil they had experienced was part of a divine plan for themselves and the innocent souls lost. And yet for others, nothing could be truer than God’s absence. To deny God in the face of such evil is the prerogative of one who has so fully suffered. Neither position — full faith nor its total absence — is for us to judge.

We are to listen, be present and comfort.

Perhaps it’s best said by Shimon ben Gamliel: “All my days have I grown up among the Sages, and I have found nothing better for man than silence.”

Andy Bachman is the senior rabbi of Congregation Beth Elohim, in the Park Slope neighborhood of Brooklyn.