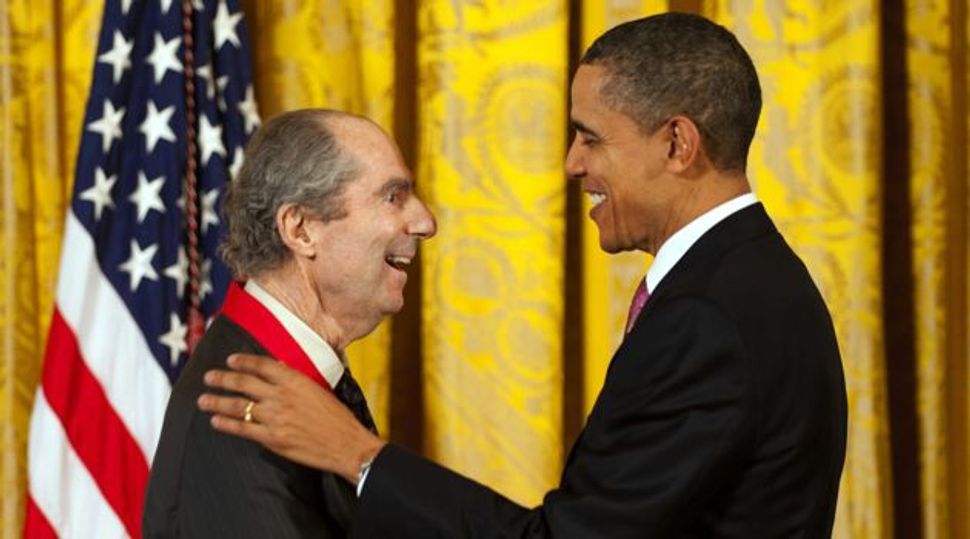 Exit Ghost: With Roth passing from the scene, who will take his place? Image by Getty Images

I may be one of the few writers who was not surprised this past November to read about Philip Roth’s retirement, nor was I inspired to sit shiva for the American Jewish novel. When our media announced the news (a month after being scooped by the French magazine Les Inrocks), a spate of commentary appeared in which writers expressed shock and disappointment, or speculated that Roth was kidding himself. Surely, he had one more story in him? Or, at the very least, another version of the same story he’d already told?

Of course no one can fill Roth’s shoes. Since 1959, when he published “Goodbye Columbus,” and up through the publication of his last, and one of his best, “Nemesis,” Roth has been our most comprehensive and innovative chronicler of the post-WWII American Jewish story, focusing particularly on the experience of the first generation American Jew raised in an immigrant home in the shadow of the Holocaust but making his way in a secular, sexually charged America. His early characters have a foot in two worlds, chasing forever the shiksa ideal, both the woman and the country she comes from.

Today’s writers owe a debt of gratitude to Roth, as well as to Bellow, Malamud, Ozick, Howe, and Paley, to name just a few of the great post-war American Jewish writers. Or as Jason Diamond commented recently in the New York Observer, young novelists have the freedom to write about Jewish themes, or not, because these postwar writers made Jewish fiction mainstream. I don’t worry about the future of the Jewish novel; I worry about the future of the Jewish reader, and the non-Jewish reader, too.

Roth himself made this point in a recent New York Times interview with Charles McGrath. “‘I do not believe the novel is dying,’ he insisted. ‘I said the readership is dying out. That’s a fact, and I’ve been saying it for 15 years. I said the screen will kill the reader, and it has. The movie screen in the beginning, the television screen and now the coup de grâce, the computer screen.’”

None of this is news to anyone who has set foot on a college campus in the last 15 years, let alone taught a creative writing or literature course on one. That students don’t necessarily connect reading with writing is nothing new, but today, plenty of them do not see reading as an essential part of being an educated, informed person, and this feels particular to our age. I don’t mean to lay all the blame on the young; reading has been on the decline among adults since the 1980s.

Of course, in terms of audience, writers on Jewish themes are luckier than most. The Jewish Book Council has created an organized, funded book tour, taking American Jewish writers to read and speak at Jewish community centers and synagogues around the country. When I published a novel in 2010, I was impressed with the organization, professionalism and passion of everyone involved with JBC; the fact of their existence made publishing a Jewish novel more appealing to a publishing industry that no longer can afford to send writers, especially unknown ones like me, on tours. Publishers and editors know that Jewish books have a built-in audience. But most of the readers I met on my own tour were middle-aged or older. Who will replace them?

I don’t pretend to be an expert, but back in 2010, as I waited in a crowded room with a hundred other writers at the JBC conference, I could not help but notice how many of them had come to pitch books, be they novels or nonfiction, related to the Holocaust. In fact, I can’t remember the last time I heard the word “Holocaust” said

Today’s young novelists can learn something from Philip Roth’s career.

aloud so many times in two hours. I say this with the awareness that some of my favorite American Jewish writers have written on this subject, that I read those books, and have survivors in my own family.

What made Roth exciting to read is how fearlessly he took on the issues of his generation, from assimilation to the sexual revolution, from McCarthy-era paranoia and anti-Semitism to the horrors of aging and prostate cancer. Some of his books were experimental, others just plain silly (“The Breast,” for instance), but he never stopped writing about, and pushing against, his own time. Yet many of today’s contemporary writers seem stuck on the issues of past generations.

Don’t mistake me, I’m not saying we should forget the Holocaust, or that anti-Semitism is an issue of the past, simply that it’s not the only issue. Plug Holocaust Fiction into Amazon and you’ll get well over 2,000 results. Plug in “Jewish fiction” and notice how many of those books have Holocaust-related themes. Anne Frank was a person, but somehow she’s become a post-modern symbol, one I’ve read enough about for now.

Ask your average Jewishly involved college student what issue concerns her most and you’re not likely to hear about how we’re forgetting the Holocaust, the history of which is taught in classes across the country. More likely, you’ll hear about how hard it is to be a Zionist on today’s college campus, or a variety of other topics (including her fear of not getting a job when she graduates). And more than a few younger female readers of Jewish American fiction — either students I’ve taught, or women who email me after reading my novel — have asked me, where are the novels with a 21st century Jewish female protagonist at their center? Where is today’s Marjorie Morningstar? Or today’s Faith Darwin, the outspoken, political, feminist alter ego of Grace Paley’s short stories?

Today, we are living in a highly technological, post- 9/11, economically depressed world, and young readers might logically be attracted to stories that reflect and clarify that reality, just as their parents and grandparents were interested in reading about their own contemporary experience in the works of Philip Roth. His books, in their time, seemed to capture the pulse of American — and American-Jewish — life, and even his failures felt modern and innovative. Yes, he touched down frequently on the past, and his beloved Newark, but this was often just another way to help his characters think about the present, or even clarify the future.