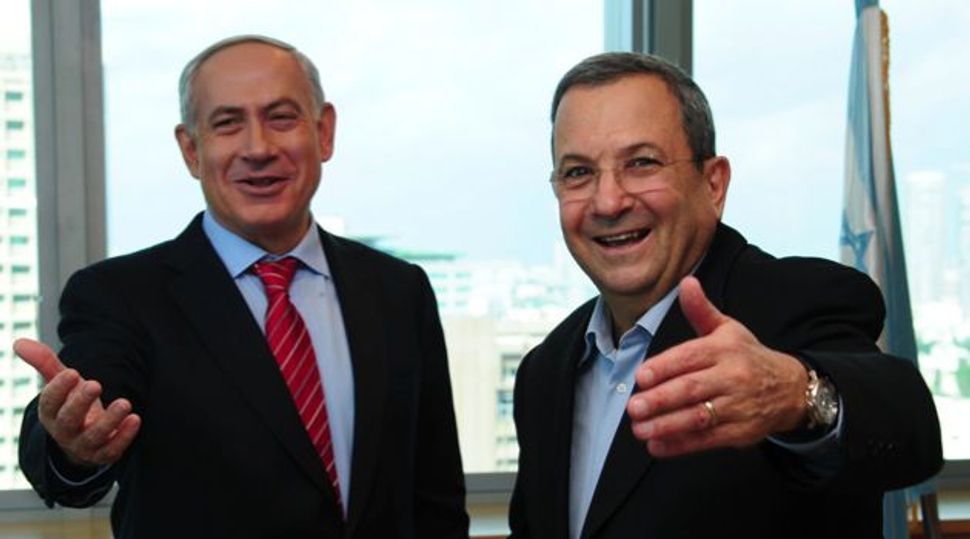 Bibi and Barak: New revelations shed light on how the two leaders are thinking about Iran. Image by Getty Images

One of Israel’s worst-kept military secrets is the simmering tension between the country’s top security professionals and their civilian bosses, Prime Minister Benjamin Netanyahu and Defense Minister Ehud Barak. The headlines surface regularly and tend to look the same, so it’s easy to miss the big picture.

Ex-Mossad chief Meir Dagan created a splash all through 2011 by repeatedly attacking Netanyahu’s “stupid” Iran plans. Less noticed, a parade of retired military and intelligence chiefs called that spring for a Palestinian state based on the pre-1967 borders, Netanyahu’s nightmare. Current Mossad director Tamir Pardo should have caused a stir, but didn’t, with a December 2011 speech insisting Iran isn’t an “existential threat.” Ditto current army chief of staff Benny Gantz, who told Haaretz in April 2012 that Iran actually hasn’t decided to build a bomb.

But none of that quite compares to the twin bombshells that landed on the Israeli public just after the new year. Barely two weeks before Israelis were to go to the polls and, by all expectations, reelect Netanyahu — mostly because of his reputation as a security maven — two explosive documents appeared in a single weekend that laid bare the depth of mistrust and disdain Israel’s professional defenders feel toward Netanyahu. Not just toward his signature Iran and Palestinian policies but toward his character, credibility and fitness to govern.

One of the two bombshells was the so-called Harpaz Report, the product of a two-year investigation by the state comptroller’s office into an ugly feud between Ehud Barak and then-military chief of staff Gabi Ashkenazi. The other was a devastating, eight-page interview in the mass-circulation Yediot Aharonot with former Shin Bet director Yuval Diskin, which effectively fills in the essential blanks left out by the comptroller.

The comptroller’s report is a 294-page litany of back-stabbing by aides to the two principals. Barak is shown to be high-handed, arrogant and peremptory, reshuffling Ashkenazi’s subordinates without telling him, filling deputy slots that are Ashkenazi’s to fill, sometimes with generals openly hostile to Ashkenazi. In turn, Ashkenazi’s staff is seen trolling for information from Barak’s office, first to find out what they’re up against, eventually just to dig up dirt. For months the two sides don’t speak to each other. Netanyahu comes off worst: Faced with a national security apparatus in meltdown, he does nothing.

The comptroller offers no motive for the feuding. But Diskin does. He paints a devastating picture of Netanyahu and Barak obsessed with Iran. Barak is sure he’s the smartest man in the room and profoundly uninterested in others’ opinions. Netanyahu is the opposite, indecisive, insecure, desperate to enter history as a Churchillian hero. Neither has the patience to examine the likely consequences of an attack: counter-attacks, international isolation, economic repercussions, Iran redoubling its bid for a bomb.

“They love to call themselves the decision-makers,” Diskin says of the duo, “but when it comes to the test of results, you don’t see them there.”

He’s not the first to talk this way, but he’s the first with this degree of up-close, day-to-day contact to speak at such length, in such damning detail. He insists his views are shared by nearly everyone he worked with — other service chiefs, key generals, subordinates.

The heart of his narrative is a meeting at Mossad headquarters in June 2010 where he, Dagan and Ashkenazi are summoned by Netanyahu and Barak to discuss Iran. Ashkenazi is ordered to mobilize the troops, to signal resolve. The three officers reply unanimously that the order is illegal: It will prompt an Iranian pre-emptive strike and is thus tantamount to declaring war, which requires a Cabinet decision. It was a pivotal showdown. Within a year all three service chiefs are replaced.

The comptroller’s story begins that August with a suspicious letter leaked to a reporter, ostensibly advising a candidate for Ashkenazi’s job on how to discredit his rivals. The candidate, Barak protégé Yoav Galant, denies involvement. A police investigation finds it was forged by an Ashkenazi hanger-on, one Boaz Harpaz, to discredit Galant.

In the end Galant is disqualified by an unrelated scandal. Barak rejects the other top contender, Ashkenazi ally Gadi Eizenkot, and settles on everyone’s second choice, the inoffensive Benny Gantz. But the infighting has forced the comptroller, Israel’s national inspector general, to step in. The comptroller’s final report is a curious blend of exquisite detail and glaring omissions. Ashkenazi’s staff gets a thorough going-over. Ashkenazi himself is sharply rebuked for failing to respect civilian authority. The report relies heavily on recordings of phone conversations in Ashkenazi’s office. Barak’s office has similar equipment, but the disks covering the period in question were mysteriously destroyed. The comptroller somehow deems this an honest mistake.

No less critical, the report omits vast sections of Eizenkot’s testimony. According to Haaretz military affairs correspondent Amir Oren, Barak had asked Eizenkot in 2009 to become Ashkenazi’s deputy, putting him first in line for the top job, but Eizenkot said no. That fall he wrote a paper arguing against a military attack on Iran. He sent it to Netanyahu, Barak and eight top generals, despite Ashkenazi’s warning that it would end his military career. At the time, Eizenkot was virtually alone in his opposition. By January 2010 he had won over Ashkenazi and much of the senior command, setting the stage for the confrontations in the spring.

Whether any of this will affect the January 22 election is hard to tell. Netanyahu aides are dismissing Diskin as a disgruntled ex-office-seeker, the same thing said about Dagan and every other critic who has come forward. Even if the disclosures trouble voters, no other candidate has successfully established herself as a credible alternative. Diskin recently urged friends to cast “blank ballots” in protest.

As for the comptroller’s report, it studiously avoids landing any punches. The word “Iran” appears only twice in its 294 pages, both times in passing.

In other news, Barak named Eizenkot deputy chief of staff in November, putting him first in line to succeed Gantz. Go figure.