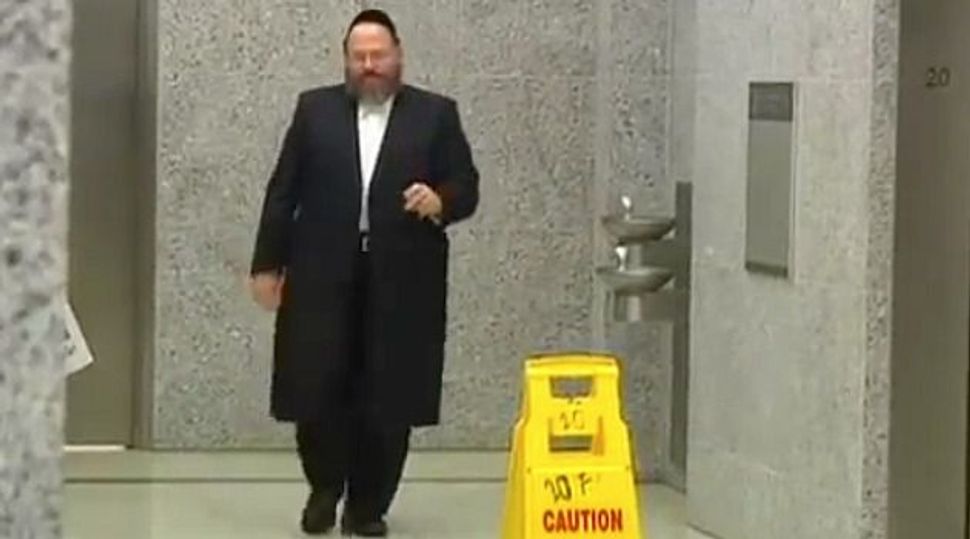 How Long Is Too Long? The 103-year sentence meted out to Nechemya Weberman is designed to send a message to his community. But what message? Image by youtube

When is a long prison sentence too long?

That’s the question many inside and outside the ultra-Orthodox community are asking this week after a judge dealt Nechemya Weberman a 103-year term behind bars for abusing a young girl.

“The abuse of a child cannot be swept under the rug or dealt with by insular groups believing only they know what is best for their community,” Brooklyn District Attorney Charles J. Hynes said at a press conference following Weberman’s sentencing.

The prosecutor’s statement closely echoed his thoughts in a written statement published in the New York Daily News on January 19, in which Hynes compared the Hasidim to organized crime groups. He proudly trumpeted the Weberman sentencing as a way to “send a message” to the community as a whole.

“I compare it to the Mafia, but at least in Mafia cases we can offer victims witness protection. That does not work in these insular communities,” Hynes wrote. “I hope the verdict and sentence sends a very clear and unmistakable message to people in certain parts of the Orthodox community.”

But is the role of a judge and jury to “send a message” to any community? Aren’t they supposed to adjudicate guilt or innocence, and mete out the appropriate punishment given the nature and circumstances of that individual crime?

“The public had a desire to create symbolic meaning out of Weberman’s religious status and standing,” said Nathan Dershowitz, the brother of famed civil rights lawyer Alan Dershowitz and a top New York lawyer in his own right. “There is a perceived view of what goes on in the Hasidic community and the system wants to change that. But this trial was an audience trial, playing to these perceptions rather than to the truth and justice of the matter.”

Michael Farkas, one of Weberman’s lawyers called the sentence “draconian.” “A cynic might feel that this is a vindictive sentence, that appealed emotionally to the judge,” Farkas said. The lawyer added that he believes state Supreme Court Justice John G. Ingram was trying his best to follow sentencing guidelines laid down in statutes.

In addition to question of whether using a case to send a message is an appropriate use of the justice system, there is also the question of whether sending this message in this way will have the desired impact of encouraging victims within the ultra-Orthodox community to come forward to secular authorities with accusations against others.

Leaders in the community have traditionally encouraged victims to take complaints to rabbis first, before going to police or prosecutors. While those in the D.A.’s office may see this as a way of stifling complaints or protecting revered figures from punishment, many in the community see it as a centuries-old pillar of their social structure.

The age-old system of allowing religious authorities a chance to deal with complaints first may allow those without power to have the problems addressed without the fear of overly harsh sentences meted out onto those who have harmed them. While we might wish to question the efficacy of that system, Hynes has certainly reinforced this insularity with his theatrics.

So when Hynes or others use Nechemya Weberman as a bully pulpit, they are in effect further isolating the community, and more importantly, its victims. It certainly seems unlikely that the Weberman case will help break down the so-called ‘wall of silence’ in the ultra-Orthodox community. Telling someone they are worse than the Mafia is not likely to encourage them to change their ways.

The pieties written by Hynes in his Daily News article and echoed by the judge’s sentence of 103 years are not actually designed to protect victims. They are aimed at promoting his own political future and selling papers to a public anxious for their prejudices against the Hasidic community to be given back to them in verdict form.

“This sentence is a mockery,” Nathan Dershowitz said when I spoke to him on the phone. He is representing Baruch Lebovits, another accused sex abuser whose conviction was recently overturned on appeal. “This isn’t justice, but playing to an audience.”

Justice must of course be served whether there is one victim or a hundred. But the D.A.’s office, with the help of the media transformed a case with one accuser into a cause célèbre similar to the case of Jerry Sandusky at Penn State or the rampant abuse involving Catholic priests worldwide. What was lacking in numbers was made up for with gory details.

Nathan Dershowitz predicts that Weberman will appeal, based on “major issues,” including the media coverage and what he called issues of the victim’s credibility. Dershowitz also pointed to several issues regarding the judge’s ruling in the case. Perhaps one of these disturbing issues is the claim that prosecutors bullied two of the defense’s potential key witnesses into not testifying. Weberman’s wife, Chaya, and the victim’s ex-boyfriend, Jeremy Solomon, were both warned to get their own lawyers if they decided to appear on the stand, a veiled threat that they could face charges themselves, George Farkas, said. Solomon was also threatened with arrest, according to George Farkas. For Nathan Dershowitz, this represents a clear violation of Nechemya Weberman’s right to a fair trial.

No one can defend a person who sexually abuses a child. But the appropriateness of 103 years in prison must be questioned, especially if it is designed to send a message not to that defendant but to an entire community.