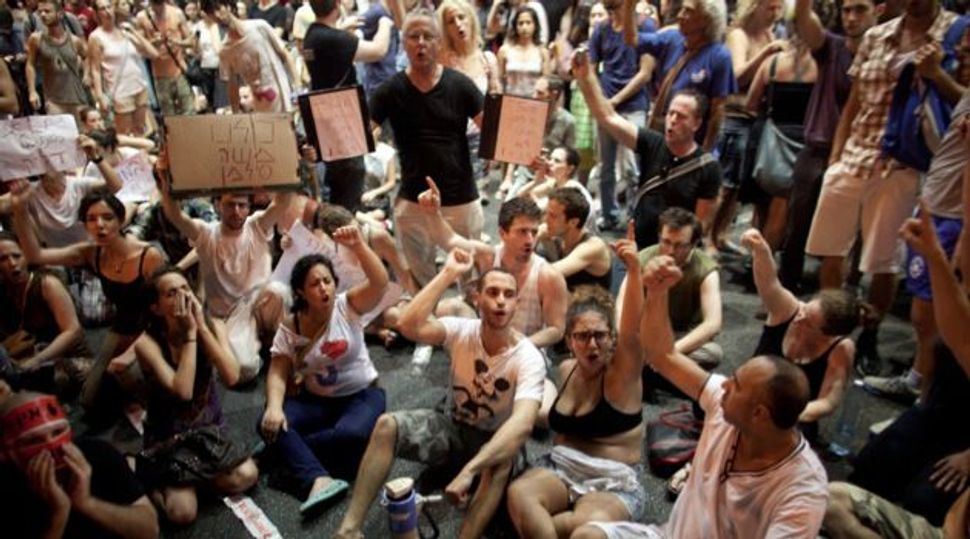 Propelled by God: Are secular Jews, like the social justice activists in Israel, motivated by religion? Image by Getty Images

Not quite suddenly — it’s been unfolding intermittently for a while, and has venerable roots in earlier generations — the debate over what is meant by “secular Judaism” has been heating up. In God-centered understandings of Judaism (or “Jewishness,” if you prefer), the commitment of large numbers of Jews to social justice derives directly from classical religious sources. But secularists claim that by now, the pursuit of justice has become so central a theme of Jewish life that it stands comfortably on its own and doesn’t require textual references to justify or sustain it.

It seems to me essential that the adherents of what we call “secular Judaism” not be stereotyped or misunderstood. True, it is the case that among those who define themselves as secular Jews, some indeterminate number are militantly anti-religious — or, more precisely, anti-God. But my own experience in secular circles strongly suggests that most secularists are basically indifferent to the God question.

That does not render them indifferent to the religious question. At best, they share the view that religion comes not to answer questions that otherwise have no answer, but to insist on questions that might otherwise be forgotten. Among these, the most persistent question is the very first question in the Jewish narrative: Where are you?

The classical response to that question is the one Hebrew word — hineini — that takes three English words to be translated: Here I am.

Secular Jews richly understand the hineini imperative, and see themselves as living according to that imperative. In so doing, they often encounter two related critiques: First, that this imperative simply does not work when detached from Jewish theology, and, second, purely secular responses wither and die unless they are rooted in religious discourse.

A pertinent example comes from the pen of Rabbi Eric Yoffie, president emeritus of the Union for Reform Judaism, who is widely and appropriately respected for his thoughtful observations on Jewish life. Writing in mid-January on The Huffington Post website (which chose to entitle his article “The Self-Delusions of Secular Jews”), Yoffie argued that the struggle he observed among secular Jews when it comes to “big religious questions… makes no sense.”

Why is that? Because “the Jewish people cannot be separated from God. The Jews came into being as a people at Sinai, waiting in readiness for the revelation of Torah; they are not now, and have never been, simply another ethnic grouping. For Jews, Jewish ethnicity does not stand apart from faith and community does not stand apart from Jewish law. Absent their religious essence, the Jewish people withers and dies.”

My friend Steven M. Cohen and I have written a rebuttal to Yoffie, available on The Huffington Post, and I don’t intend here to recapitulate what we said there. Here, the question is only about the viability of secularism. For Yoffie, “values such as social justice, hospitality and menschlichkeit (decency)… are grounded in the sacred texts of Jewish religious tradition and have endured solely because of the authority that the religious tradition imposes.” The very essential center of this tradition, for Yoffie, is the Jewish people’s covenant with God.

Now, ask the Jews most engaged in the work of justice whether they feel they are parties to a covenant with God, and very many — in my view, the overwhelming majority — will look at you incredulously. (An exception: It is worth noting, and praising, the vigorous work of Uri L’Tzedek, an Orthodox outlier that is the most visible Orthodox endeavor in the arena of social justice.) In the view of that majority, secular Judaism is, in fact, a religious undertaking, often infused with explicitly religious language, frequently drawing on the writing of the Prophets. God? Sometimes yes, sometimes no. God is, for the most part, simply not what this is about.

For Yoffie, the roots — God — are essential ingredients in the struggle for social justice. And it is true that without roots, branches cannot long survive. But visualize in place of rootless branches mighty oaks that drop acorns that sprout, usually a good distance (20 to 30 meters) from the mother oak. The new trees to which they give birth do not look to the mother tree for guidance; they have their own work, the work of growing, to attend to.

And yes, in the scheme of things — both ecological and mystical — that is sacred work.