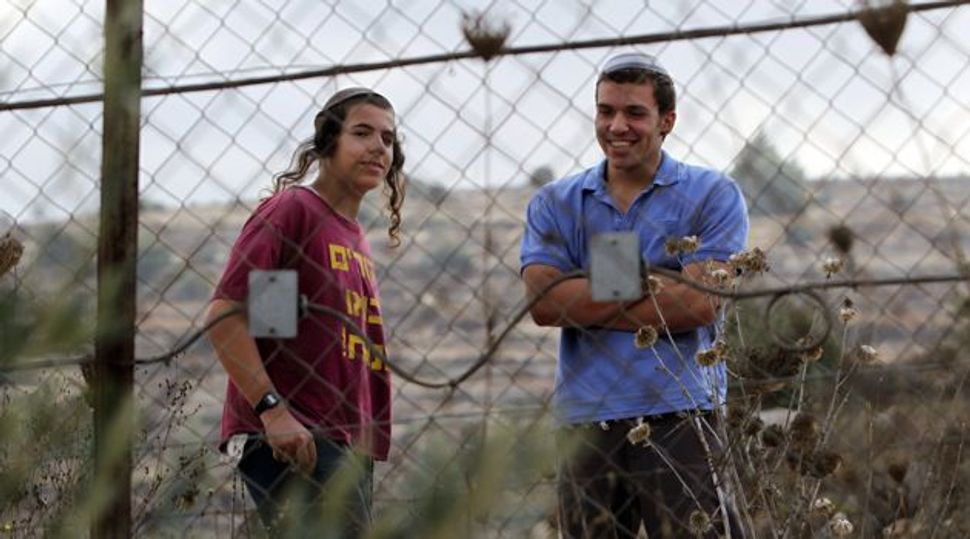 Future Palestinians: Could Jewish settlers ever accept to live in a Palestinian state? Image by Getty Images

“There’s no greater cliché,” I wrote in this column a month ago, “than the one that keeps insisting that the settlements are an obstacle to peace. They may have been that once, when they were few and sparsely populated enough to be removed. Now that they’ve long passed that point, any peace agreement will have to make room for their existence.”

In response, I received a letter from a reader that said:

“Every once in a while I wake up to a reality that’s been staring me in the face. Today’s was: Too late on the settlements. Duh! You’re right: Those settlements are eminently there. But I still don’t understand what, if not for a state, the scenario is meant to be for the million Palestinians living next door to them.”

My reader, of course, was expressing what is just about a universal belief. It takes the form of a simple syllogism: 1) Peace between Israel and the Palestinians depends on the establishment of a Palestinian state. 2) Jewish settlements cannot exist in such a state. 3) Therefore, the settlements are an obstacle to peace.

The odd thing is that no one stops to ask: But why can Jewish settlements not exist in a Palestinian state? In what book of rules is that written? Why, if over a million Palestinians currently live in Israel, can hundreds of thousands of Jews not live in Palestine?

These are weighty arguments. They deserve to be taken seriously. But the argument that, like it or not, the settlements are here to stay is even weightier. (Personally, I like it. For both pragmatic and principled reasons, I want Jews — many Jews — to live in the entire Land of Israel. I’d prefer them to live there under Jewish sovereignty, but if that can’t be done everywhere, I’ll settle for less.)

Even after one subtracts the so-called “settlement blocs” that can presumably be swapped for territory now in Israel (a very big “presumably,” but no matter), close to 100,000 Jewish settlers are now living on land that will be part of any Palestinian state. These are the settlers who will have to be evacuated from their homes if no Jews can live in such a state. They constitute more than ten times the number of the 8,000 settlers evacuated from the Gaza Strip in the summer of 2005.

What happened in 2005 and subsequently? Large parts of the Israeli army and police force had to be mobilized for the evacuation. For days, the country sat before its televisions watching Jews dragged from their houses. The experience was traumatic.

Even many Israelis who favored the evacuation swore they could never live through such a thing again. The cost of the operation and of the compensation paid the settlers ran into many billions of dollars. Eight years later, there are evacuees who have still not been successfully relocated.

And Israel is going to do this again with 100,000 settlers in Judea and Samaria — many of them more militant than the settlers in Gaza, all of them living in areas more precious to Jewish historical memory than was Gaza, most far closer to the center of Israel than was Gaza? There isn’t the remotest chance of it happening.