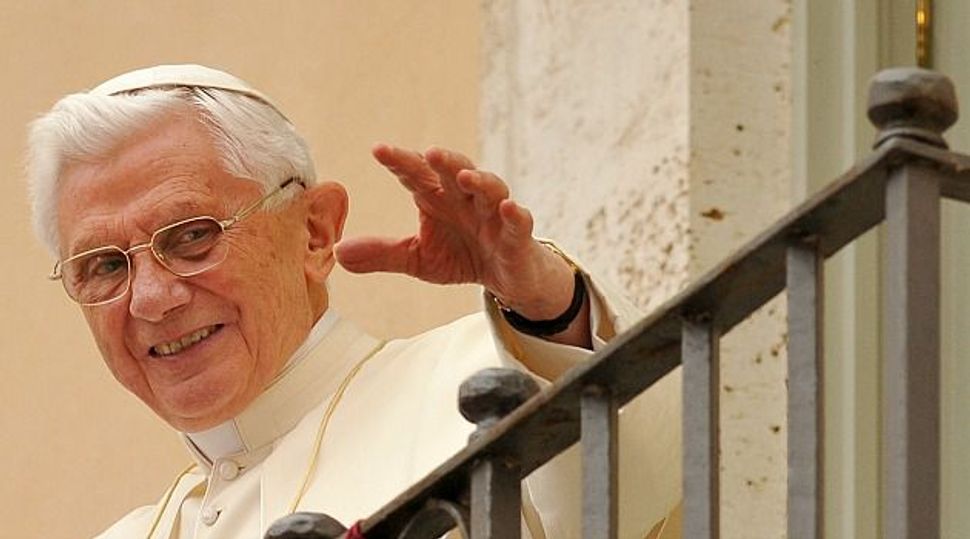 Pope Benedict XVI shocked the world with his announcement that he will step down at the end of February. Though resignations are permitted by a little known paragraph of canon law, no pope has submitted one in six centuries. Historians will now begin asking about Benedict’s legacy.

In the field of Jewish-Christian relations he will not be remembered as having enjoyed success. Most of his initiatives involved a gaffe of one sort or other. From a visit he made to Auschwitz we recall that he conspicuously avoided any statement of repentance for the church’s history of teaching anti-Semitism.

Later, he attempted to reconcile the church with reactionaries who deny the reforms of Vatican II, where, among other things the church renounced the theological sources of hatred of the Jews, sometimes called anti-Judaism, above all the idea that Jews lived under a curse for killing God. These extremists have refused the Vatican’s overtures, perhaps saving the pope further embarrassment. Among their number are Holocaust deniers.

Perhaps most troubling, in the spring of 2008 Benedict announced a Good Friday Prayer for the Jews “that God our Lord should illuminate their hearts, so that they will recognize Jesus Christ, the Savior of all men.” This seemed to presage a return to the practice of trying to convert Jews and denying—against the teaching of Vatican II—that Jews stand in a covenantal relation with God.

Some people who care about relations between Christians and Jews may breathe a sigh of relief at Benedict’s resignation. Others will see it as a mixed blessing. After all, he and his conservative predecessor John Paul II have appointed the overwhelming majority of the Cardinals who will vote on his successor.

Call me an optimist, but I see little reason for alarm. For one thing, there is no necessary relation between “conservatism” and acceptance of Vatican II teachings on the Jews. Though reviled in liberal quarters for his views on birth control and the ordination of women, John Paul II had a keen sense for the Church’s new approach to the Jews, and went beyond the Vatican II language, calling Jews Christians’ “older brothers,” who lived under a covenant “never revoked by God.”

Along with a conservative approach in other matters this sensitivity went back to his native Poland, where he had formed close friendships with Jews as a boy.

Yet more important is the fact that the Vatican II declaration on the Jews is authoritative Church teaching, pronounced by the highest authority, an ecclesiastical council, and cannot be revoked by a pope. It was instructive to witness the embarrassment among Benedict’s advisors after release of the Good Friday prayer. Within hours, Cardinal Walter Kasper, responsible in the hierarchy for relations to Jews, was attempting damage control.

He wrote as follows to Rabbi David Rosen, Chairman of the International Jewish Committee on Interreligious Consultations: “The text is a prayer inspired by Saint Paul’s letter to the Romans, Chapter 11, which is the very text that speaks also of the unbroken covenant. It takes up Paul’s eschatological hope that in the end of time all Israel will be saved. As a prayer the text lays all in the hands of God and not in ours. It says nothing about the how and the when. Therefore there is nothing about missionary activities by which we may take Israel’s salvation in our hands.”

The Cardinal’s words were remarkable on two counts: first, they make no reference to the Pope’s actual prayer. But second, Kasper reaffirmed the Vatican II teaching that Romans, Chapter 11 is the source of the church’s understanding of its relation to the Jewish people. There, however, one finds no talk of illumination to the Jews. Rather, one finds the ideas that animated bishops at the Second Vatican Council:”Has God rejected his people, by no means!” “Have they stumbled…by no means!” “The gifts and the call of God are irrevocable.”

Jay Bernstein of Shalom USA Radio asked me whether the church’s new approach, based in Paul’s letter to the Romans, is not selective, as it seems to pass over much other scripture. What about the infamous call of the crowd in Matthew 27: “His blood be on us and our Children!” How can this be ignored if divinely inspired? Must not Christians think of Jews as damned because their own holy works say so?

The answer is that they must not and that this passage is not ignored. But to see that one must look to a story that is larger than the Catholic church and goes back to the years after World War II, when Jewish and Christian intellectuals gathered in small European towns, like Seelisberg, Switzerland, or Oxford England, and worked out new ways for Christians to think about Jews.

They were deeply influenced by the reasoning of Jules Isaac, a French-Jewish historian who had written a study called Jesus and Israel while in hiding during WWII (his wife and daughter did not survive). Isaac concluded that anti-Judaic readings of Christian scripture were not necessary, but were produced by anti-Judaic lens that Christians had worn throughout history.

It was absurd, said Isaac, to claim that the Jewish people had rejected or crucified Christ: because of their dispersion around the Mediterranean in that time, most Jews did not even know he existed. Isaac’s challenge was worded not in terms of revelation, which he left untouched, but in terms of historical knowledge, and critical, scholarly readings of texts. No doubt the Gospels portray harsh invective by Jesus against Jewish authorities, but they do not record enmity of Christ against Jews or Judaism. On the contrary, Isaac assures us, “with rare exceptions, wherever Jesus went the Jewish people took him to their hearts.” He heaped “signs of love and compassion on them in return.”

In the scholarship on Paul that has followed the trail blazed by Jules Isaac two things stand out: first that if one wants to understand what Paul thought about the Jews one must read his letters and not what others said about him (for example in Acts of the Apostles).

When one does that one sees that Paul was a faithful Jew who thought that Jews should live according to the law. Second, Paul was capable of learning, and therefore his letter to the Romans, as his last letter, has added weight , incorporating the culmination of his reflections. It is also the only statement in Christian scripture where the author speaks directly to readers about the Jewish people. Other references are indirect.

Therefore, the Vatican II reading is not only Catholic teaching: it emerged from and is solidly embedded in a widely held scholarly consensus which claims not only that the old anti-Judaic readings of Christian scripture were harmful and unnecessary, but that they were wrong.

Those who study history have good reason to fear that progress may be reversed. But Benedict’s record in Jewish-Christian affairs shows the limited impact even a tone deaf Pope can have. When in the person of Cardinal Kasper the Church had to face the world, he was drawn toward the Vatican II teaching with a force like gravity. The pope’s new prayer was not only not defended: it was forgotten. Only a miniscule proportion ever heard it any case, because it is prayed in Latin, which is used at a tiny fraction of Catholic parishes.

Yet history also teaches that complacency serves no one. Theologians may share a consensus about passages in the New Testament, but that does not mean the new teaching has reached Christians in the pews, who often shy away from theology as a matter best left to experts. But theology is too important to be left to the experts. One does not need to read the original Greek to understand the issues involved; they are well explained in accessible works, for example books on the Gospels and Paul by the Boston College Jesuit Daniel Harrington. In my view, Harrington should become a household name.

We also know from history that it is a good thing that Jews take an interest in Christian scripture. Jules Isaac’s book stimulated a generation of Christian theologians, for example the young Augustinian Gregory Baum, who helped draft the Vatican II statement. But that statement would never have been imagined had it not been for a direct, personal appeal by Isaac to Pope John XXIII in the summer of 1960. He implored this sympathetic pope (who had helped Jews during the Holocaust) to do something to put an end to a history of contempt.

Without Isaac there would have been no statement on the Jews, but without John XXIII there would have been no council to begin with: the charge was to bring the church “up to date.” It’s worth recalling in these hours that John XXIII, elected in 1958 after nineteen years of monarchical rule under Pius XII, seemed to contemporaries a complete surprise, a blast of fresh air with no evident origin, elected by cardinals who had been chosen by a pope who tried to shield the Church from history.

John Connelly is professor of history at the University of California, Berkeley, and the author of “From Enemy to Brother: the Revolution in Catholic Teaching on the Jews, 1933-1965,” (Harvard University Press,2012).