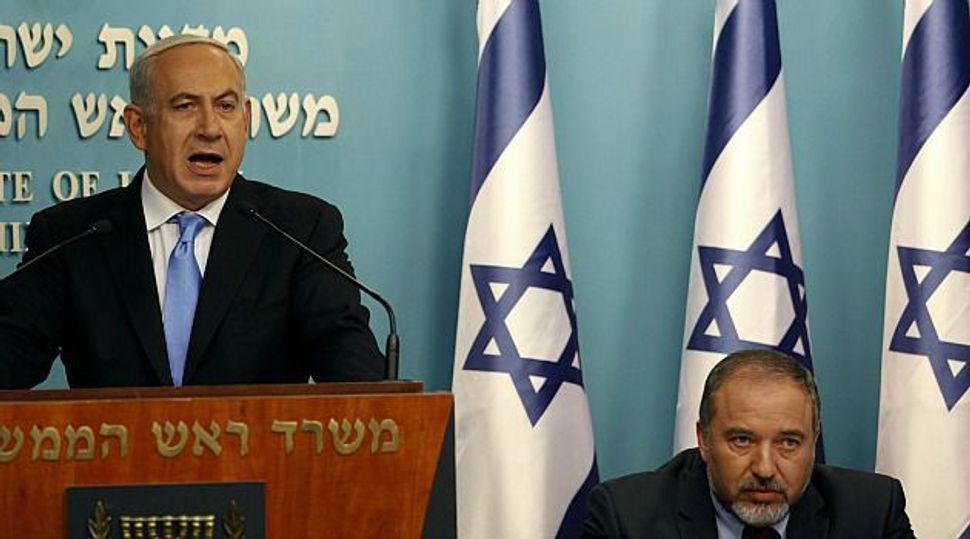 Any hopes that Avigdor Liberman had for a quick trial in time to become part of Israel’s new government were dashed today, when his trial opened in Jerusalem and looked set to become a slow affair.

Yisrael Beytenu party head Liberman, who was Foreign Minister until he resigned to face his charges shortly before the election, is accused of fraud and breach of trust. He allegedly promoted an Israeli diplomat in gratitude for information in to a police investigation against him.

He pleaded not guilty and denied all charges against him. But Liberman will pay a heavy price for the trial whatever its outcome, as the timescale under discussion is lengthy, to May and beyond — long after the new government is in place. This means that there’s no way he’s going to be cleared and ready to take up his old job in the Foreign Ministry by the time the new government takes office later this month or next month.

For Liberman this is the ultimate frustration. His party was at an historic juncture — it ran the election on a joint ticket with the ruling Likud party bringing it closer than ever to the real power it has longed for since he set it up in 1999. He had taken Beytenu from a niche Russian speakers’ party to a mainstream party of the right, and this was his big break. Plus, ironically the investigation that had dogged him for years — the one about which the diplomat allegedly gave him information — has been dropped.

As if things can’t get worse for Liberman, his former right hand man in the party and the Foreign Ministry Danny Ayalon is expected to be one of the key witnesses and seems to have lots to say even before he appears in court. The Jerusalem Post reports that he has said that Liberman shouldn’t go back to the Foreign Ministry even if cleared, that the “world treated him like a leper,” and that while the diplomatic appointment in question was appropriate, he “put pressure [on the selection committee] to appoint certain people to the Foreign Service, which I succeeded in blocking, because I convinced him that they were not worthy.”

Liberman’s ray of hope may be Prime Minister Benjamin Netanyahu. Rumors abound in Jerusalem that Netanyahu may take the foreign portfolio himself, gambling on a not-guilty verdict for Liberman and handing the job to him when the trial is finished. But is this really realistic? The last two gambled that Netanyahu hasn’t taken hardly paid off well.

First was what many took as his gamble that Mitt Romney would become US President which many in Israel have claimed will make life harder with second-term President Barack Obama. Second was his decision to merge Likud and Liberman’s Yisrael Beytenu for the election, which significantly weakened his party in Knesset. Does Netanyahu believe in “third time lucky”? We’ll soon see.