The Wrong Way To Fight BDS 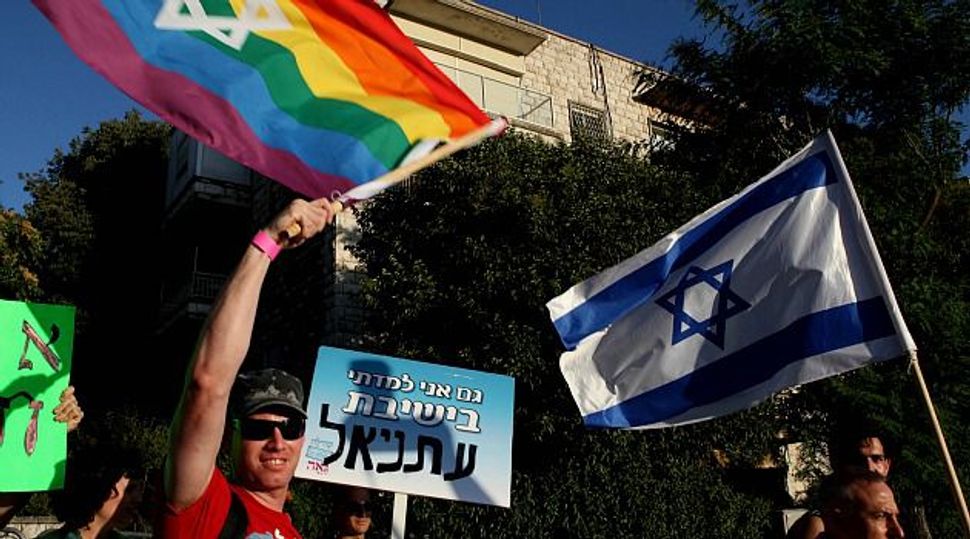 Curiously, Dean Spade, a transgender activist in Seattle, thinks censorship is a good idea, too. In a mirror image of the recent dust-up at New York’s LGBT Community Center, which banned (and then semi-un-banned) a speech by BDS supporter Sarah Schulman, Spade and his fellow activists last year convinced Seattle’s LGBT Center to ban a panel of Israeli gay activists sponsored by A Wider Bridge, a group that connects LGBT Jews to Israel

Spade, like Foxman and Lucas, believed that he was fighting hate speech. In his view, the Israeli occupation of the West Bank constitutes both oppression and racism: One ethnic group is suppressing another, and denying it its democratic rights. The United Nations, you may recall, once agreed with him. Giving support to such racist actions is thus hate speech.

A pox on all their houses. Spade was wrong to censor pro-Israel speech, the ADL was wrong to support censorship of anti-Israel speech — and, most important, they are all undermining themselves by doing so. Calling pro-Israel speech “hate speech” demeans the very term, and silencing BDS makes Israel and its supporters look like bullies who use financial or political pressure to get what they want, which, of course, is exactly what BDS supporters allege.

Let’s focus on the second example, since it’s closer to home than the first. In his recent paid “op-ed” in The New York Times, Foxman spent 811 words making his case. But the entirety of his argument was contained in just 20 of them: Because some BDS activists oppose the existence of the state of Israel, “the BDS movement at its very core is anti-Semitic” and “there is a huge difference between defending one’s right to give a speech in the public square as opposed to using university dollars to sponsor a hate-fest.” This is wrong on both counts.

First, to oppose the Occupation; to support a Palestinian right of return; even to oppose the very existence of the State of Israel — all of these are political views that have nothing to do with hate. They may be wrong (and I think they are very wrong), but hate?

Perhaps it goes without saying that many of BDS’s leading advocates — Sarah Schulman, Judith Butler, Jewish Voice for Peace — are themselves Jewish. Some even believe they are acting out of their Jewish values in taking these political positions. Misguided? Maybe. Naïve? Perhaps. But hateful? In what way? Martin Buber opposed the notion of a Jewish state. Was he also anti-Semitic?

Of course there is anti-Semitism in the BDS world — just as there is racism among many right-wing Zionists. But Butler and Schulman are reasonable, thoughtful intellectuals. I think they are deeply wrong about Israel/Palestine, and have said so in print. But anti-Semites? Come on. That doesn’t pass the laugh test.

The ADL has set the gold standard in fighting anti-Semitism. But with every pro-censorship stance it takes — against the “Ground Zero Mosque,” against free speech on campus — it loses more and more credibility and cheapens the meaning of the term “anti-Semitism” itself.

Instead of being a watchdog, the ADL has become the boy who cried wolf.

Second, Foxman’s distinction between the public square and a university or community center misses the whole point of the latter kinds of institutions and turns supporters of Israel into blackmailing bullies. Community centers, universities and communal organizations are meant to be spaces for community members to convene, discuss and debate. Selectively vetoing a subset of those activities — especially using financial pressure — undermines the very mission these organizations are meant to serve. It’s not a “community center” if some members of the community are excluded, especially those with the stature of Butler or Schulman.

Moreover, censorship is counterproductive. It doesn’t work (ever heard of the Internet?), and it makes the “Case for Israel” (in Alan Dershowitz’s phrase) seem pathetic. Is banning the opposition by financial blackmail the only way to make this case? It must be a pretty weak one.

In sum, by cheapening the term “anti-Semitism,” by turning Israel’s supporters into bullies and by undermining the true case for Israel, the “Pro-Censorship Movement” ends up delegitimizing Israel and Judaism.

BDS isn’t hate speech — it’s just speech that some people hate. There may be good reasons to dislike it; BDS rhetoric distorts Israel’s motives, ignores Palestinian violence, singles out Israel unfairly and calls for destroying a society that many people love. Its supporters are often silent about bigotry within their ranks, and duplicitous as to their vision for the future. But I could say the same about Democrats, Republicans and Likudniks. Hate it or not, BDS is a legitimate political view, and an understandable response to the diplomatic standstill and creeping land-grabs in the West Bank.

If you oppose BDS as I do, let’s fight it not by driving it out of our community institutions — that only turns BDS’ers into victims and Israel’s supporters into bullies. Let’s engage with its arguments, prove them wrong and win out of right, not might.

The Wrong Way To Fight BDS