Haredi Power on the Brink 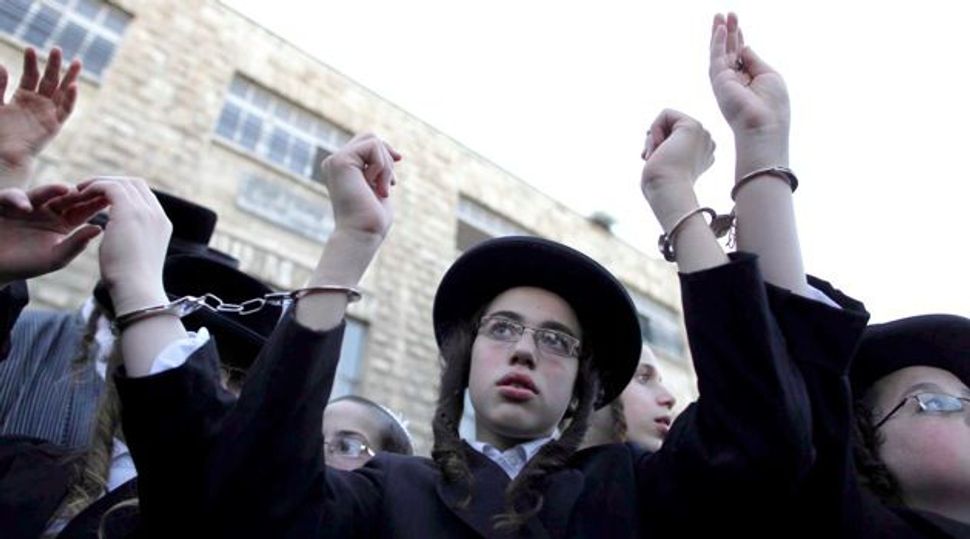 On a cool winter evening in 2012, a senior delegation of ultra-Orthodox rabbis and politicians — members of Israel’s Ashkenazi religious party, United Torah Judaism, and the Sephardic religious party, Shas — convened in Bnei Brak, a predominantly Haredi city near Tel Aviv. The host was a 98-year-old rabbi, Aharon Shtainman, spiritual leader of the Ashkenazi Haredi stream. The objective was to form an Ashkenazi-Sephardic bloc to prevent the conscription of yeshiva students into the Israel Defense Forces following the expiration of the Tal Law, which currently exempts them from these obligations.

Exiting the meeting, some of the delegates announced that they were willing to go as far as to sacrifice their lives to ensure that Haredi students may continue to study the Torah instead of joining the military.

This extreme rhetoric might sound like an expression of strength and confidence. But it’s not. These ultra-Orthodox parties are, rather, at a point of desperation, concerned about the future of their political power within Israel. Pressure, rather than theology, is the element that has united these vastly different parties in recent months — the result of last January’s general elections for the Knesset, growing public pressure to integrate Haredi men into the military and the labor force, and trends within the Haredi world itself.

The election sent a clear message to Benjamin Netanyahu, insisting that he form a coalition to address the middle class demand for social and economic justice and equality. It’s a task that would become easier without Haredi parties occupying key positions in the coalition and working to secure Haredi financial interests.

With 19 Knesset seats claimed by Yair Lapid’s centrist party, that part of the Israeli population who want the social and economic burdens more equally shared now have a significant counterbalance to the two Haredi parties who won a combined 18 seats. There is a chance that the Haredim will find themselves out of the next coalition.

For the Haredi parties, spending the next few years in the opposition is tantamount to political catastrophe. Limited influence on the state’s budget will impede their ability to secure financial resources for their yeshivas or to influence the negotiations regarding the future of yeshiva students. These scenarios are a direct strike at the heart of the Haredi world and its leadership. Both UTJ and Shas will use all the political tools at their disposal to avoid reaching this ebb.

Despite the present gloom, the elections offered proof that UTJ’s natural constituency was growing quickly. For the first time, the Haredim’s staggering natural birth rate of about 5% a year was reflected in the ballots, and the party increased its number of mandates to seven. In Jerusalem, for example, UTJ was the party that won the highest number of voters.

As for Shas, the party was hopeful in the run-up to the elections. While the secular center-left parties were plagued by disagreements, Shas presented a unified front, headed by its three political stars: Eli Yishai, minister of Internal Affairs; Ariel Atias, minister of Housing, and Aryeh Deri, a veteran politician and a former minister who returned to politics after a long break and imprisonment for alleged corruption while in office. But Shas’s great hopes ended with relatively mediocre return of Knesset seats, as the party did not increase the number of its mandates, but remained with 11.

Increasing poverty rates, Yishai’s role in the mismanagement of the disastrous Mount Carmel forest fire in 2010, his deficient policies and comments in handling illegal African infiltrators to Israel, and the party’s wrong-footed and (to some) racist campaign shortly before the election have severely sabotaged Shas’s credibility and image

The position of the two Haredi parties has become precarious and — in these days of coalition talks — the parties have been making an emotional appeal not to divide the country by leaving their large constituency disenfranchised. On a more practical level, they also have been emphasizing their instrumental support for Netanyahu’s previous premierships in 1996 and 2009, as well as their potential to offset more ambitious elements like Lapid, who has openly declared his goal of becoming Israel’s next prime minister. In the next several weeks we will find out whether the Haredim’s efforts will bear fruit.

Perhaps the biggest sign of panic from Haredim regarding their political future and institutions has been their sudden wooing of their fierce ideological antagonists, the Modern Orthodox Religious Zionist party, Habayit Hayehudi (the Jewish Home). During the election, the Shas spiritual leader, Ovadia Yosef, even called the new party a “home for gentiles.” The Haredi parties are trying now to harness influential figures and rabbis within the Religious Zionist camp and to persuade them to refrain from establishing an alliance between the party’s leader, Naftali Bennet, and Lapid.

And, in case Habayit Hayehudi joins the coalition, they hope to convince the party not to support Lapid’s plan for a comprehensive conscription of yeshiva students. If they end up in the opposition, the Haredi leaders will attempt to safeguard their yeshivas by trying to ensure that Habayit Hayehudi blocks any radical legislation on the issue of conscription.

Certainly, the Haredi world, its political parties, and the rest of Israel’s society are right to be worried. The integration of Haredim into modern society is now considered an existential matter for Israel as a whole. The participation of Haredi men in national service is only the tip of the iceberg: Within a few decades, the Haredim will surge to 25% of Israel’s total population from 10%.

In the past decade, the number of children enrolling in Haredi schools has increased by nearly 60%. Haredi schools dedicate a daily hour for the study of basic mathematics and Hebrew, with no sciences, information technology, foreign languages or geography. By the ninth grade, the only disciplines that young Haredim study are Torah and Jewish law.

Considering Israel’s domestic and regional challenges, it must sustain not only a strong military, but also an educated society. The Haredi parties will offer resistance. But if they are excluded from a new government, the wakeup call that began with the election results will be complete. Hopefully, for their own good and Israel’s future, UTJ and Shas will have the good sense to help shepherd their communities into a new, inevitable era.

Moran Stern is a lecturer at Georgetown University’s Program for Jewish Civilization in the Edmund A. Walsh School of Foreign Service.

Haredi Power on the Brink