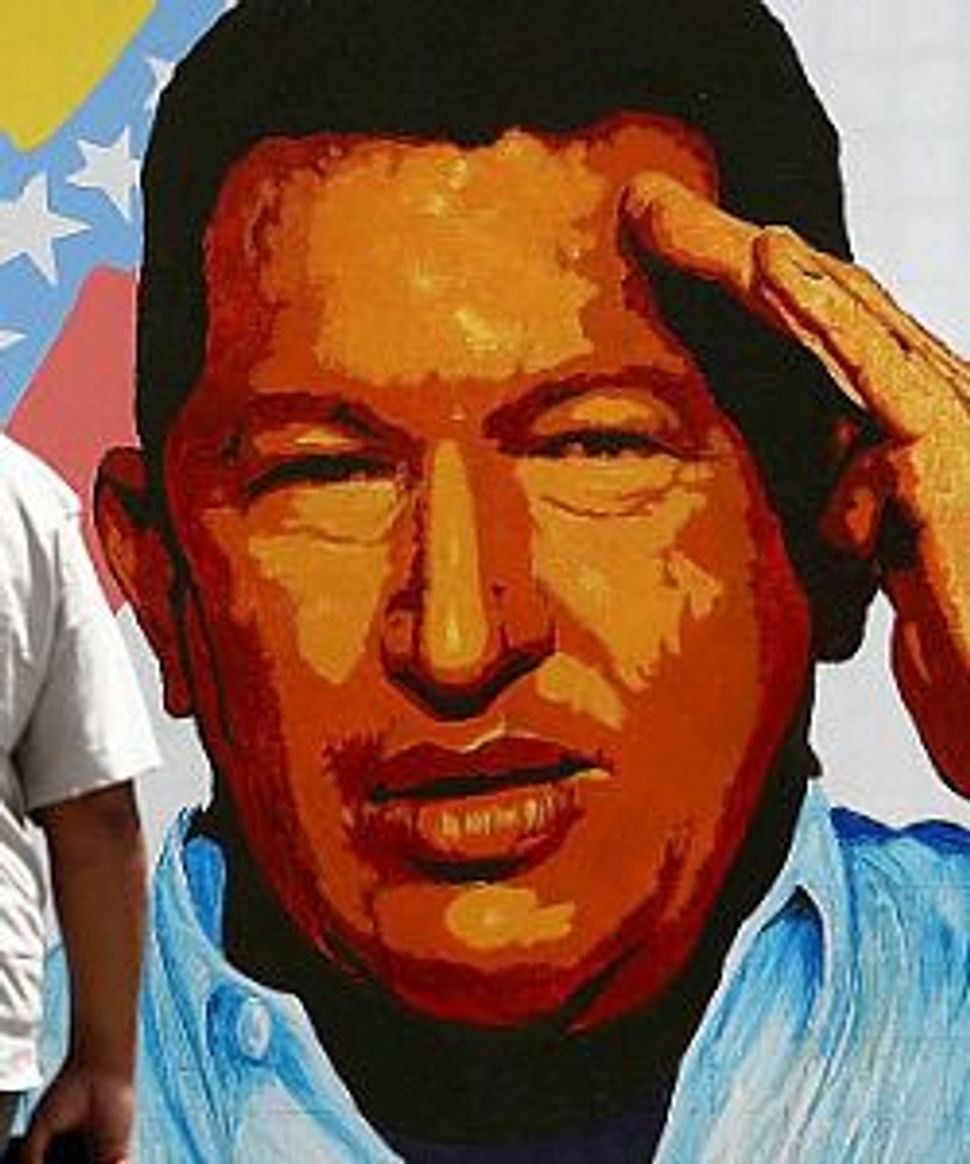 Venezuelan President Hugo Chavez’s death in Caracas today will likely amplify turbulence that’s characterized life in the South American nation since his ascension to power in 1999. Friends I met during a visit to Caracas last month tell me everything – the economy, social stability, livelihoods, diplomatic relations – could be ripe for upheaval.

I’m also wondering what this means for Venezuela’s Jews, most of whom — if they haven’t fled to Miami — live in the capital of Caracas. The Jewish community has fallen to about 10,000 from a peak of 20,000 just before Chavez came to power in 1999.

During my visit, I sought to interview some Jewish Caraquenos about life under Chavez amid reports of rising anti-Semitism. While I was there, JTA reported Chavez had been accused of spying on local Jewish groups.

During last year’s elections, the late president derided opponent Henrique Capriles, whose grandparents were Polish Holocaust survivors, as “imperialist,” a “capitalist,” a “little bourgeois,” and “Zionist”. And a campaign-related article in state media – headlined “The Enemy Is Zionism” – said Capriles “represents Israeli ideology covertly,” according to CNN.

I never got to ask the questions. In the tony Los Palos Grandes neighborhood, I headed to Marrakech, one of the city’s few kosher restaurants. An elderly man wearing a yarmulke – the first and only kippah I saw in Caracas – sat in a courtyard while a few diners munched on Moroccan specialties like tabouleh and kibbe. He was talkative, but when I mentioned I write for a Jewish news organization in the States, his demeanor darkened. The conversation effectively ended.

Likewise, the restaurant’s manager insisted that Marrakech’s owner, Haim Leom, wasn’t on the premises, and wouldn’t return until later in the week. He had no recommendations for other meeting places where I might talk to local Jews, and his manner made it clear he was eager for me to leave.

It was just one encounter in a city of 3 million. But the chill drove home the fear Venezuelan Jews must live with under a regime whose rhetoric demonizes them.

Within hours of Chavez’s death, David Bittan, president of the Venezuelan Confederation of Israelite Associations, urged Jews and other Venezuelans to stay home and wait for word about mourning.

“This is not the time to stress what separates us,” Capriles said in a condolence message, calling for unity and respect for the loss that many felt after Chavez’s demise.

“There are thousands, maybe millions, of Venezuelans asking themselves what will happen, who even feel fear,” he said. “Don’t be scared. Don’t be anxious. Between us all, we’re going to guarantee the peace this beloved country deserves.”

If Capriles somehow wins the first post-Chavez election maybe things will improve. But if he doesn’t, and vice president Nicolas Maduro continues what my friends call “Chavism without Chavez,” the horizon looks a lot more menacing.