Talking Back to Anti-Muslim Subway Ads 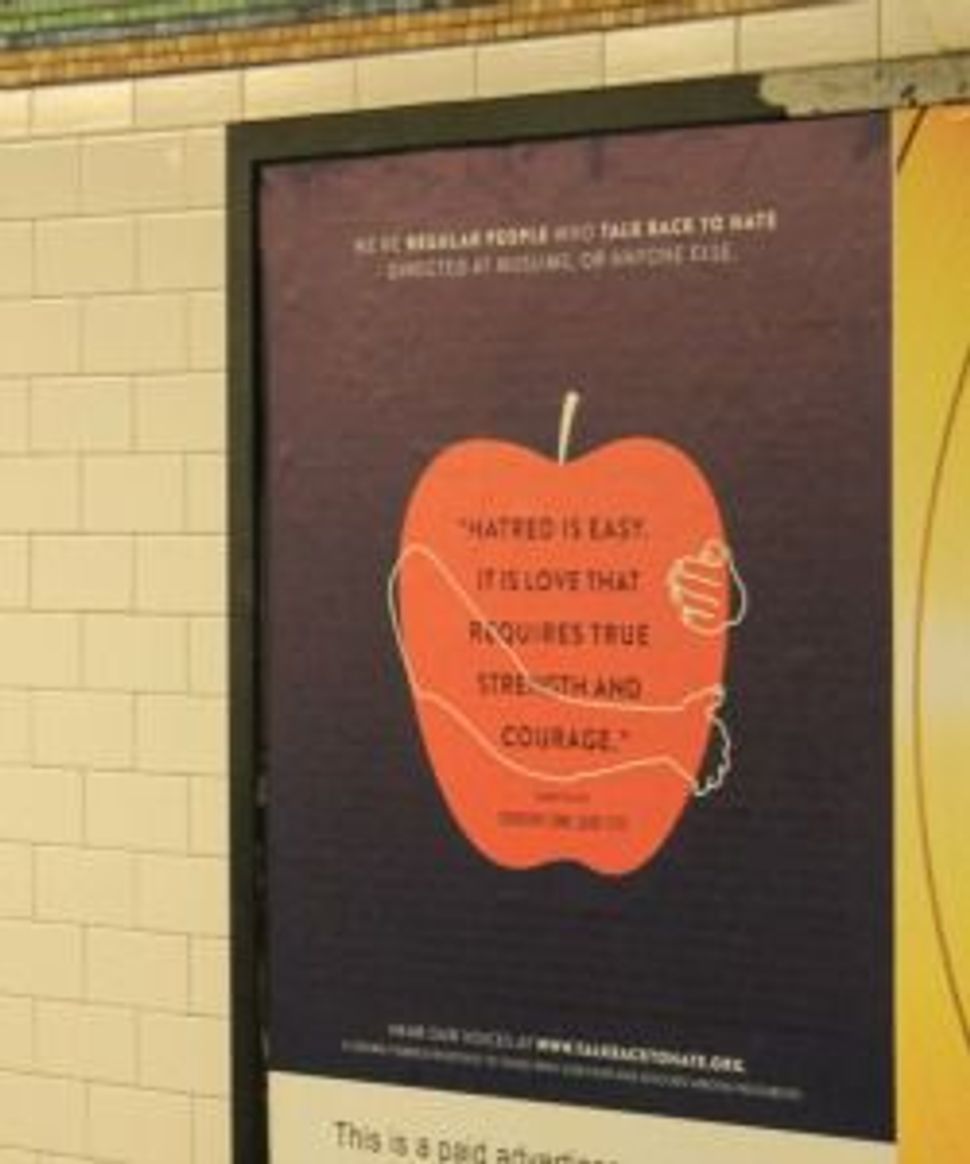 Akiva Freidlin’s maternal grandparents came from Warsaw and most of their family was killed in the Holocaust.

So when the 30-year-old non-profit staffer saw subway posters “demonizing” Muslims last December, his “historical memory” kicked in. Alongside an image of the blazing Twin Towers, the ads attributed this quote to the Koran: “Soon shall we cast terror into the hearts of the Unbelievers.”

Freidlin’s response to the controversial anti-Islam campaign from the Jewish-led American Freedom Defense Initiative: “Talk Back to Hate”, an advertising effort aimed at countering AFDI’s “craven and cynical” message.

The inaugural Talk Back to Hate ad is a stylized apple bearing the inscription, “Hatred Is Easy. It Is Love That Requires True Strength and Courage.” The line came from Dorothy Zink, a volunteer from Huntington Beach, Calif.

Entirely crowdfunded, Freidlin’s campaign has raised more than $10,000 from as far as Dubai. Much of the funding paid for the first ten “Talk Back to Hate” ads in high-traffic New York City subway stations like Times Square and Rockefeller Center (for ad locations, see here). The ads will appear throughout New York until March 24.

Freidlin’s now raising money for another flight. “Don’t let hate get the last word,” implores the Talk Back to Hate site. “If you chip in, we’ll buy our own ads — and run them in as many stations as we can.”

The Forward caught up with Freidlin by e-mail in New York.

Michael Kaminer: The “Talk Back to Hate” web site notes you’re the grandson of Holocaust survivors. Why point that out?

Akiva Freidlin: As a result of carrying that historical memory, I am wary of any effort to intimidate, demonize, or stigmatize the individual members of any religious or ethnic group. I find it particularly disturbing to see it done in such a craven and cynical manner, in a city that thrives on diversity, in a country founded on pluralism.

When I thought of the campaign, I had actually hoped to avoid attaching my name or identity. I haven’t done anything like this before and the thought of publicly linking myself to the project made me nervous. I decided to do so only because it seemed unlikely that anyone would contribute money to a campaign made up by some guy on the internet who wouldn’t even reveal his name. After making that decision, it seemed important to explain my connection to the issue.

Do you think the ads might have an opposite effect by hardening some people on the other side of the cause?

I suppose that might be possible, and I understand that not everyone will agree with us. But we need to add our voices to the conversation rather than ceding public debate about what we consider acceptable public discourse.

Have you had direct contact with AFDI? What would you say to the faces of the group’s leaders?

I have not had any contact with that group, and I should say that I’m not talking about any particular person when I criticize these ads. But messages from the campaign’s contributors are displayed on our posters and on the website for anyone who is interested.

What kinds of reactions have you had from Muslims? Are they surprised or skeptical that a Jew’s behind the campaign? Have any Jews been upset?

A significant portion of our contributors are Muslims, and we have received supportive messages from all over the Islamic world via social media. I can’t speak for them, but I don’t get the impression that they’re skeptical or particularly surprised about who I am. The fact that I’m Jewish is intriguing, and it’s part of my personal reason for starting this, but to me the campaign expresses values that transcend any particular religious or ethnic boundary. And I think people connect to it on that level.

I’ve had a couple of angry responses online from people who appear to be Jewish, based on their social media profiles. I hope that they will remember what I see as one of Judaism’s great contributions to human culture, the commandment that “You shall not wrong a stranger or oppress him, for you were strangers in the land of Egypt.” I’ve had a much greater volume of response from Jews who try to keep this idea in mind.

What’s the bottom line of what you hope to achieve through the campaign? Is there an action you want people to take?

I want to give a voice to the majority of people who wish to live in harmony with their neighbors, in the United States and elsewhere. And I want to show the world that – despite the shrillness of a small number of increasingly marginalized provocateurs – the people of the U.S., and especially of New York, are proud of our diversity, and welcoming to those who come here looking for peace and prosperity.

As for action, for now at least, I hope they’ll donate to the campaign, so they can suggest a message for our next subway ad-buy, and add their names to the “digital version” of our poster.

The site proclaims that “the U.S. has a tradition of secular democracy that attracts and inspires people from around the world.” Considering the AFDI campaign and other developments, how would you assess the state of that secular-democratic tradition these days?

It’s a fair question! We have strong institutions here, and the broad path of American history tends toward the expansion of rights for groups who had been excluded from full political / economic participation. But that doesn’t happen automatically; it happens because we advocate what we believe. Maintaining an open, secular democracy requires constant work, and that means proclaiming and reaffirming our values when bigotry undermines the traditions we’re proud of.

Any plans for similar campaigns around other issues?

We’re raising money for another round of ads. The current Indiegogo campaign (www.Indiegogo.com/TalkBackToHate) ends on March 20, and we need to raise $3,500 by then.

Beyond that, we have no concrete plans, but I would like TalkBackToHate.org to continue as a way for people of goodwill to express themselves publicly in response to well-funded groups that foment hatred and intolerance. I’m currently thinking about the best way to make that happen.

Talking Back to Anti-Muslim Subway Ads