Israel’s Dr. Dolittle Government Has Two Heads When It Comes to Peace 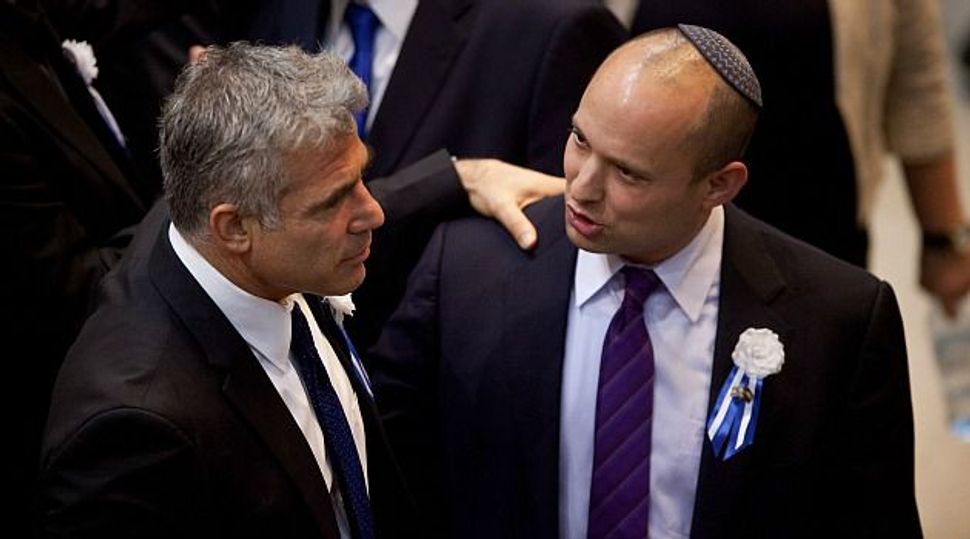 Two-Headed Beast: Both sides of Israel?s government agree there is a need for quick action on the peace process. But they disagree profoundly on which direction to go. Image by getty images

Maybe it’s just coincidence, but there does seem to be an awful lot of talk lately about the possible demise of the Jewish state. Indeed, it feels as though it’s heating up just as Israel approaches its 65th birthday. Should we be reading something into the fact that 65 is the age of retirement? Is Zionism headed out to pasture? Or am I just being paranoid?

Nobody is predicting demise as a near-term certainty. Well, nobody other than the mullahs in Iran. Even Hamas is talking about a 50-year cease-fire, which is their way of saying they know Israel isn’t going away any time soon. You hear lots of talk about the end of Zionism from one-staters and BDS types, but that’s basically just wishful thinking. The Berkeley student senate isn’t about to seize control of central Israel.

Actually, it’s mostly Israelis and their friends, not their enemies, who are talking about the prospect of extinction. Not as a sure thing, but as a genuine possibility. To be honest, it’s getting rather alarming.

It’s true, of course, that disaster has been batted about as a possible scenario for as long as there’s been a Jewish state. If the prospect of doom weren’t lurking somewhere nearby, the United Jewish Appeal would be reduced to holding rummage sales. What seems new these days is an element of urgency, a sense that unless Israelis wise up pretty fast, it’s curtains.

The other thing that’s new is the radical discordance in Israelis’ assessments of what’s wrong and how to fix it. In a word, half of Israel believes the country faces doom unless it separates itself from the West Bank and allows the creation of a viable Palestinian state. The other half believes the country faces doom unless it keeps the West Bank and prevents meaningful Palestinian statehood. Both sides think Israel’s problems are eminently manageable, but each believes the other side won’t allow it.

What’s more, each side believes it has the support of the majority of Israelis, but suspects the other side is winning by stealth — the right by expanding West Bank settlements until separation is impossible, the left by conspiring with foreign governments to force Israeli withdrawal. That’s why you hear so much talk about the end of Israel these days: Each side believes the other is on the verge of leading the country over a cliff.

That’s the subtext behind the forced smiles and wildly divergent responses to President Obama’s visit to Israel just before Passover. Obama shares the view of those who think that Israel needs to separate — that peace is “necessary,” “just” and “possible,” as he said in his Jerusalem speech — and that the Netanyahu government is dragging its feet. He went to Israel to try and rouse what he believes is the sleeping majority. This pleased many of his Israeli listeners but infuriated many others, including more than a few who agree with him about peace but resent a foreign leader pulling an end run on Israeli democracy.

It’s also the story behind “The Gatekeepers,” the Oscar-nominated Israeli documentary. It features six former Shin Bet directors — all six living ex-Shin Bet directors, in fact — talking about the corrosive impact on Israel of its continuing occupation of the West Bank. It’s causing headaches all around the world for Israeli diplomats and spokesmen, who find themselves pressed to explain why Israel doesn’t separate when its own security professionals think it can and should.

Most of all, this is the story of the ungainly new government that Benjamin Netanyahu assembled in the wake of the January 22 Knesset elections. It’s an odd, two-headed creature that has a settler, Uri Ariel, in charge of the housing and construction ministry, and a peacenik, Tzipi Livni, in charge of negotiations with the Palestinians. Theoretically it will work like Doctor Dolittle’s pushmi-pullyu, the mythical creature from children’s literature that had a head at each end and couldn’t move in either direction.

Conventional wisdom these days has it that this is just what the Israeli public is looking for. Supposedly Israelis have coalesced around a new consensus that embraces half of each side’s doctrine: On one hand, the occupation is a disaster for Israel. On the other hand, there’s no partner for peace on the Palestinian side, so withdrawal is impossible. It’s messy, but that’s the hard reality of the Middle East, or so says conventional wisdom.

If that’s so, then the new Netanyahu government is exactly what the Israeli public is looking for. It’s also what the voters asked for. Of the 120 seats in the Knesset, only 12 went to an explicitly pro-settlement party, Jewish Home. Another 12 went to Jewish parties that were explicitly pro-peace, Kadima and Meretz. A solid majority went to either Yesh Atid and Labor, which ran on domestic issues and ignored Palestinian affairs, or Likud, whose leader, Netanyahu, touts the two-states-but-no-partner quandary as policy.

Another 11 seats went to parties representing Israel’s Arab citizens, but conventional wisdom doesn’t count them within any consensus.

Unfortunately, the actual numbers don’t support any of that. Netanyahu may have embraced two states as a theoretical goal, but his party hasn’t. In fact, about two-thirds of his 31 lawmakers explicitly reject it. So do about half of Shas’s 11 lawmakers, though it’s unclear how their spiritual leader, Rabbi Ovadia Yosef, would have them vote if it came to the floor. All told, there’s a solid bloc of between 30 and 40 Knesset members in Jewish Home, Likud-Beiteinu and perhaps Shas who would vote against Palestinian statehood.

As for Labor and Yesh Atid, they campaigned on domestic questions and ignored the Palestinian issue for reasons of electoral strategy, not principle. All 15 of Labor’s lawmakers and most of Yesh Atid’s 19 favor prompt negotiations toward two states. They didn’t campaign on those views, but they didn’t hide them.

Combined with Kadima, Meretz and the Arab-based parties, there are at least 50 reliable votes in the Knesset for a viable Palestinian state.

The ambivalent, yes-but viewpoint of the supposed new consensus holds perhaps 30 Knesset seats. The rest are divided between unambiguous supporters of the left and the right. That more or less reflects the voting public, according to various analyses of election returns and public opinion polling.

It’s not ambivalence that keeps Israel frozen in place, but deadlock. That’s why you hear so much doomsday talk. Each end of Israel’s pushmi-pullyu is terrified that the other end will take charge and start walking over that cliff.

Israel’s Dr. Dolittle Government Has Two Heads When It Comes to Peace