What’s at Stake After Hugo Chavez 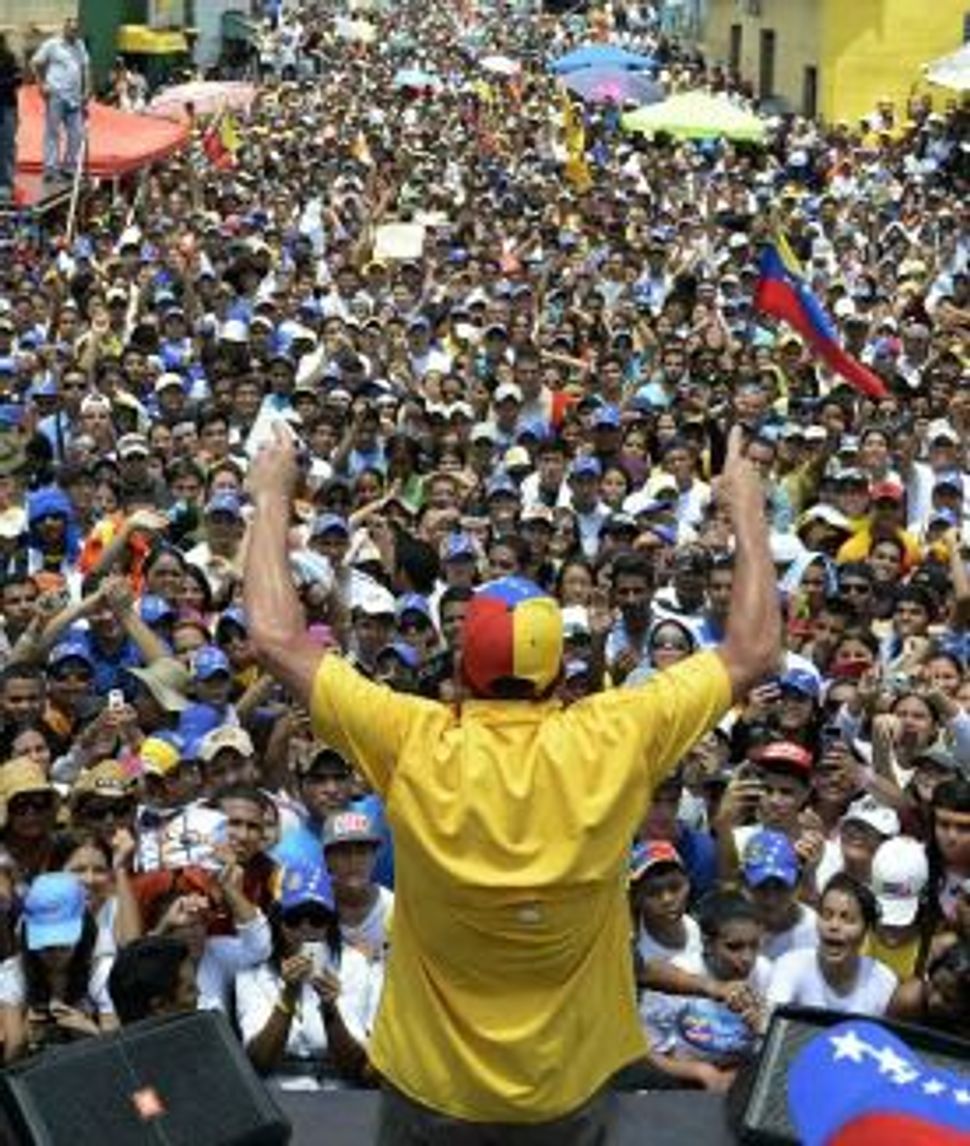 Uphill Fight: Venezuelans are voting for a new president amid a surge of emotion around the death of Hugo Chavez. Image by getty images

On Sunday, April 14, Venezuelans will vote to replace their late president, Hugo Chavez. And while Chavez may have succumbed to cancer last month, his shadow looms large from the grave.

The campaign of Nicolas Maduro, Chavez’s handpicked successor, continues riding the intense emotions around the longtime strongman’s death. That has made the campaign an uphill battle for Henrique Capriles Radonski, the opposition leader whose Jewish background has been fodder for ever-escalating levels of anti-Semitic rhetoric.

In previous elections, the tireless Capriles led Venezuela’s opposition to some of its best poll results. Though he’s shrunk Maduro’s lead to 10 points, according to Reuters, many observers believe Chavez’ legacy may prove the election’s deciding factor.

For Venezuela’s Jews, any hope of change means a positive sign. As the Forward reported last month, the late president derided Capriles, whose grandparents were Polish Holocaust survivors, as “imperialist,” a “capitalist,” a “little bourgeois,” and “Zionist.” And a campaign-related article in state media – headlined “The Enemy Is Zionism” – said Capriles “represents Israeli ideology covertly,” according to CNN.

For an inside perspective on what the election could hold for the country as a whole and the Jewish community in particular, the Forward spoke with David Bittan, Caracas-based president of the Venezuelan Confederation of Israelite Associations.

During the Chavez regime, Bittan provided a fearless voice against anti-Semitism. On the night of the death of ‘El Commandante,’ Bittan went on national television to express condolences.

Michael Kaminer: What’s the most likely outcome of the April 14 elections? And what does it mean for Venezuela’s Jews?

David Bittan: It’s a very close election. We hope that whoever wins, and becomes president, will respect and promote Jewish life in our country, will fight anti-Semitism and will reestablish diplomatic relations with the state of Israel.

Has the rhetoric around Jews and Israel softened at all since Chavez’ death, or is Maduro continuing the same hard line?

During the presidential campaign, anti-Semitism has increased, specially in pro-government media. Attacks on presidential candidate Henrique Capriles Radonsky for his Jewish background have multiplied. Several graffitis calling jews assasins have been seen in traditional jewish neighborhoods of San Bernardino and Sebucan, even on Synagogue walls

How do you think Capriles’s Jewish roots affect his chances in the election, either in positively, negatively, or not at all?

Venezuelan people are traditionally open, tolerant and against any type of discrimination. Therefore we believe that Capriles´s Jewish roots will not have any effect on the election result.

What kind of role has the CAIV played in the transition, and what kind of role do you see the organization playing through the election? I know you went on television the night of Chavez’ death to urge Jews and others to stay home and wait for word about the mourning process.

CAIV is not a political organization nor does the Jewish community involve itself in politics. Our goal is to provide a the best possible conditions for our members to live a fulfilling Jewish life, free of anti-Semitism, regardless of which government is in place.

It’s important to clarity that when Mr. Chavez died, I didn´t instruct anybody to stay home. All I said on behalf of the Jewish community were words of condolences to the president´s family and followers.

Do you think the trend of Jewish emigration from Venezuela can ever get reversed?

Absolutely. If conditions that generated the emigration in the first place (lack of personal safety, economical uncertainty and anti-Semitism) cease, we are positive that many of the individuals who left the country will consider coming back. Venezuela is a wonderful country, filled with opportunities and with very special people.

What’s at Stake After Hugo Chavez