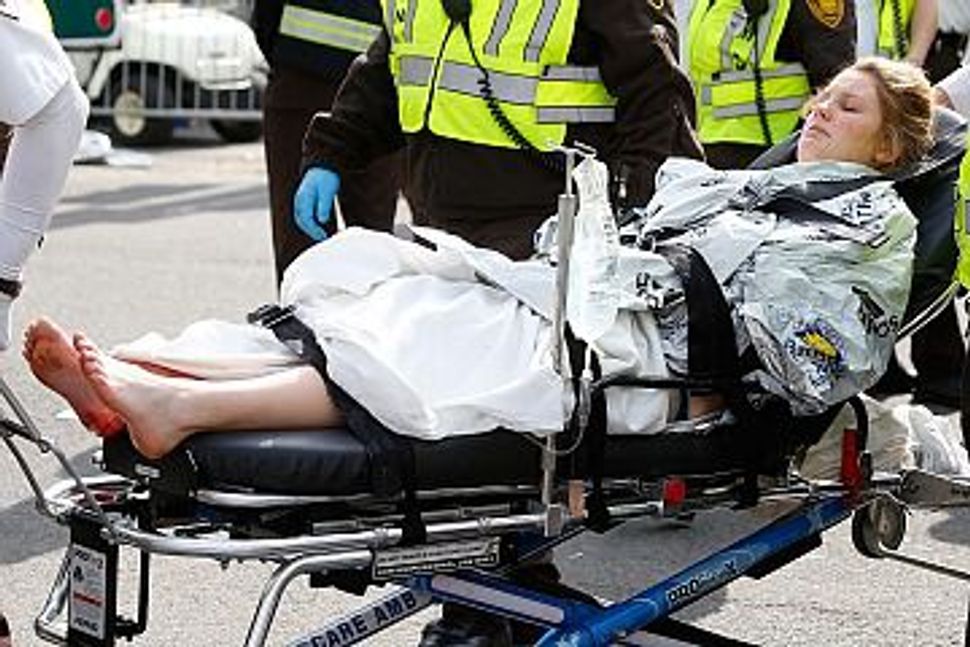 A woman is loaded into an ambulance after being injured by one of two bombs exploded during the 117th Boston Marathon. Image by Getty Images

Five years ago, terrorists attacked the Boston Marathon. As the runners return to the streets of Boston, we look back at how the tragedy hit home for Abigail Jones.

When you grow up in Boston, there are a few things you take as fact: The Red Sox are religion; driving in the breakdown lane is accepted and the Boston Marathon is one of the most celebrated days on the calendar.

The Boston Marathon is the oldest marathon in the country, dating back to 1897. Each spring, it takes a winding route through Boston’s suburbs, starting in Hopkinton and making its way through Framingham, Wellesley and Newton before spilling out into Boston’s Back Bay.

Growing up, my family and I would walk the five minutes it took to get from our house in Newton to cheer on runners near the famed Heartbreak Hill. It was a packed, messy scene of unmatched excitement and pure joy — marathoners running by in packs; fans cheering on friends, loved ones and total strangers; boom boxes blasting, and families hanging out on fold-up beach chairs, drinking beers and eating Cape Cod potato chips and chilling out. The weather almost always seemed to cooperate, too. My sister and I would sandwich ourselves between nearby fans to hand out Dixie cups filled with water and Gatorade. We looked for the names runners wrote on their shirts and shouted in failed unison: Go Jessica, go! You can do it, Meagan!

I left Boston for college and graduate school, but moved back in the fall of 2004. I was living in Back Bay at the time — in an apartment that I shared with my sister, just five blocks from where the bombs exploded — and it was then and there that my love for the marathon took on a new meaning.

One spring, I watched the race from a friend’s rooftop in Cleveland Circle, about three miles from the finish line. It was one of those mildly grungy post-college walkups that probably hadn’t had a fresh coat of paint in decades. Someone was grilling hotdogs and hamburgers, and my friends and I stood there in a tight group, sipping pink cocktails, wearing tank tops, yelling our hearts out for anyone who ran by with a Dana Farber Cancer Institute T-shirt.

I was with a close friend who was in her second or third remission since being diagnosed with breast cancer (she died a few short years later). A Boston transplant herself, she was overcome by emotion at the sheer number of people running for her cause — and utterly enamored by the experience that was Marathon Monday. We stood there on that roof yelling love notes of support for runners with Dana Farber T-shirts until we both lost our voices. And then we yelled some more.

Nearly 10 years after that afternoon, Boston’s biggest day took on yet another meaning.

I first learned about the Boston Marathon bombings while sitting in a meeting at the Forward.

“Two bombs went off at the marathon,” my colleague said, looking at his phone as he sprinted out of the room.

My shock turned to fear and then fear turned to worry and sadness. You’d be surprised by how many people who grow up in Boston end up staying in Boston. My sister still lives in the apartment we shared back in the day. After sorting through a barrage of emails, texts and Instant Messages flashing on my computer screen, I was extraordinarily grateful that everyone I know in Boston was shaken but unharmed, including my sister, who was just a few blocks away at the time.

Watching a tragedy unfold in my hometown is stunning in the worst way. The further I fell down the rabbit hole of social media’s breaking news cycle, the more heartbreakingly real everything became. I watched videos of the explosion over and over again, scanning the crowd for familiar faces. I saw innocent people’s limbs chopped off, their skinless bones jutting out at angles I didn’t know were possible. I saw blood smeared across familiar stretches of sidewalks. Sitting in my office in Manhattan, I took in the real-time reel of pain and horror — all of it unfolding on the streets of my childhood and early adulthood.

It’s been difficult to ascertain a clear picture of what happened yesterday. Misinformation has been rampant, and it will be days, possibly weeks or more, before we know what really occurred. But what remains crystal clear are my memories of Boylston Street near the finish line, where I used to hang out as a teenager precisely because my parents deemed it safe enough; or of Commonwealth Avenue in Newton, where as a child I stood on the sidelines sticking my skinny arms into the street, waiting for runners to sprint by and grab a cup of water; or of that day on the rooftop, where marathon runners did for my friend what few others could do — give her hope.

Our memory of the Boston Marathon has been seemingly changed forever. But Boston was founded, in the words of John Winthrop in 1630, as a “city upon a hill,” a model for the world. The people of Boston will again reinvent themselves and make new memories of their marathon.