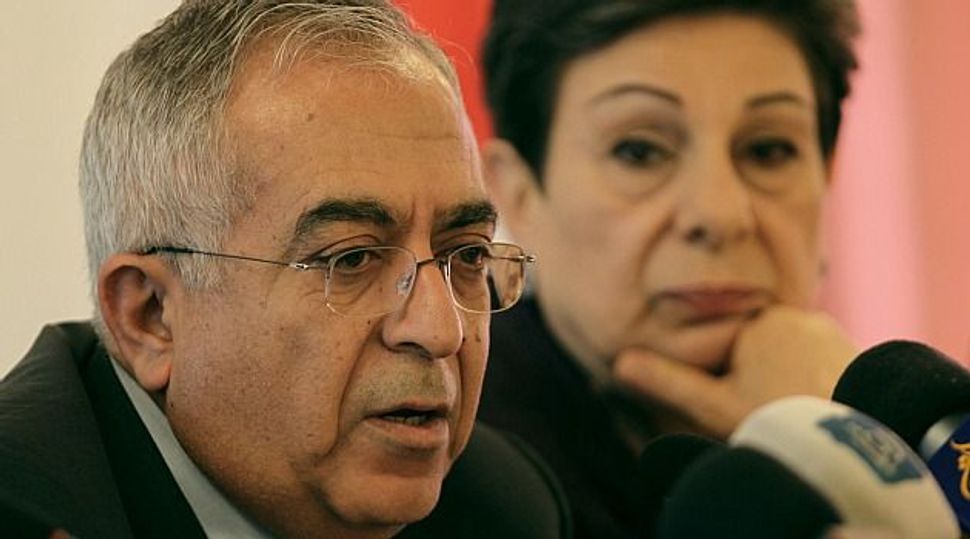 Man in Middle: Palestinian Premier Salam Fayyad was caught between Israeli intransigence and Ramallah obstinance. With enemies on both sides of the Green Line, he never had a prayer.

When Salam Fayyad took over the Palestinian ministry of finance, the No, 1 complaint against the Palestinian leadership was corruption. I should know: In 1996 I was jailed for seven days because the small TV station I was running dared to broadcast live a session of the newly elected Palestinian legislative council dealing with corruption. Much has happened since then.

Now that he has been a minister and then prime minister, the former World Bank official has put Palestinian finances in order. He unified all income sources, dried up all slush accounts and went against Yasser Arafat’s orders by insisting on paying all security officials by direct bank account (rather than with cash given to their commanders based on a questionable list of personnel). Fayyad also became the first Arab government official to publish his government’s entire budget online, ushering a new transparency not seen in the entire Arab region.

As prime minister, Fayyad gave new meaning to the term “rule of law,” developed the Palestinian police and security forces (to impressive results), and upgraded the judiciary and its independence. Palestinian Radio and TV Corporation moved closer to a public service operation, although the president’s office has continued to dictate the news segment. Independent media has also witnessed a golden period even though cases of security violations of press freedoms have persisted.

Fayyad began drawing up a detailed plan of what the Palestinian state should look like and directed his government and international funders in that direction. His blueprint of the state included human development and created the needed infrastructure for statehood, which included roads, ports and a West Bank airport.

Fayyad’s efforts won him high marks on all levels, but it failed to provide him with the one element that was necessary: the acquiescence of the Israelis who directly controlled Area C, more than 60% of the West Bank.

The latest human rights report of the United Kingdom’s foreign secretary, issued April 15, details some of the Israeli human rights violations that have no doubt weakened Fayyad; among them are an “unprecedented surge” in Israeli settlement, referred to in the report as “illegal under international humanitarian law”; a barrier that incurs illegally on the Palestinian side of the Green Line; the restriction of people and goods to and from Gaza, including access to agricultural and fishing areas; 589 structures demolished in Area C in 2012, and 871 people displaced; violation of article 53 of the Geneva Convention; only 5% of building permits requested by Palestinians for Area C approved, and administrative detention used as punitive measure rather than for the narrow security purpose for which it was intended.

The Palestinian prime minister was also never able to convince Israel to respect the honor and legitimacy of the Palestinian government within Area A. Regular infiltrations continued unabated even after the professionally trained Palestinian security forces proved (according to senior Israel Defense Forces officials) their ability to deliver. Fayyad’s legitimacy was eroded every time an Israeli army incursion occurred in Palestinian areas or every time settlement activities increased.

As the United States and other Western countries were unable to change Israeli behavior, the Palestinian leadership decided to seek help from the United Nations. This proved to be a fatal blow to Fayyadism, as Israel and the Americans turned against the Palestinians through financial means. The U.S. Congress halted all aid; Israel held back taxes it had collected on behalf of the Palestinian Authority and tightened travel restrictions.

The ability of Salam Fayyad to overcome this economic hardship was further eroded by the failure of the two major Palestinian rivals to enact a Saudi- and Qatari-sponsored reconciliation agreement. Funding from those two wealthy Arab countries was held back until the agreement was completed, even though all evidence showed that the pro-Iranian Hamas was not interested in holding elections that could unseat them from power. Recent internal elections in Hamas and the distancing of the Islamists from Bashar al-Asaad and Iranians may now make this possible, but it will be too late for Fayyad.

As the economic pinch hit home, Fayyad had no choice but to tighten the belt, This put him in direct conflict with such local powers as the pro-Fatah Public Workers Union, which refused to accept cuts or delays in its members’ salaries and benefits. This situation was in turn a gift to Fatah cronies who have always despised Fayyad, a non-Fatah member, because he refused to do what previous prime ministers have done: spread the wealth to others in the party.

Fayyad’s downfall was certainly abetted by internal forces unhappy with his professionalism, but there is no doubt that failure to deliver on political goals, refusal of Israel to respect his legitimacy and curtail its powers, and America’s abandonment of him led to his departure. Ironically, a last-ditch effort by Barack Obama and John Kerry to help boost the Palestinian prime minister was too little, too late. In fact, Kerry’s public attempt on Fayyad’s behalf was the last straw. Asked if he would withdraw his resignation after this public 11th-hour American plea, Fayyad said that no power on earth would make him withdraw it. Fayyad, a Palestinian patriot who has always tried to keep his finger on the pulse of the Palestinian people, understood that had he stayed in power, he would have confirmed his people’s worst fears that he was simply a Western stooge.

Daoud Kuttab, former Ferris Professor of Journalism at Princeton University, is the regular columnist for Almonitor.com