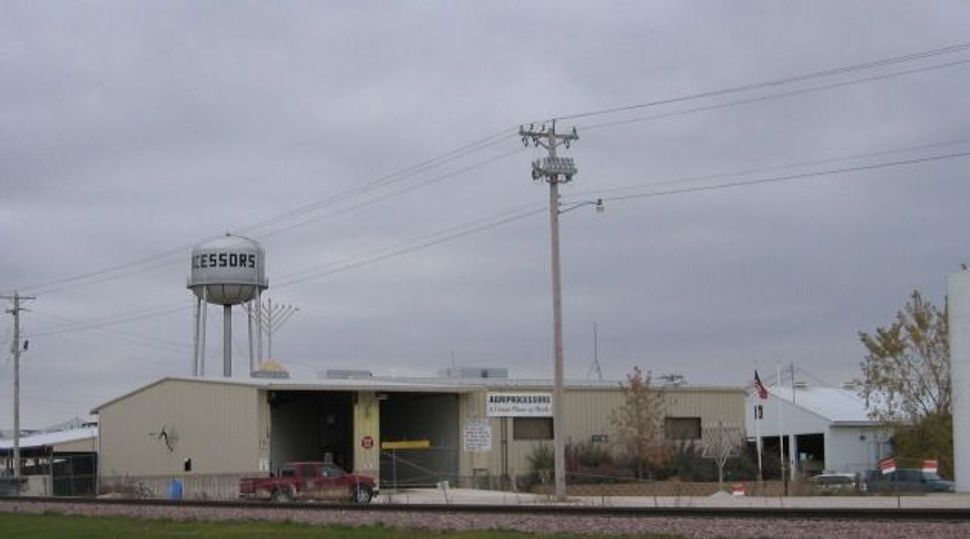 Kosher Scandal: On the anniversary of the raid that started the Agriprocessors kosher meat scandal, a look at what has changed, and what is still the same.

Sunday, May 12, marks the fifth anniversary of the massive immigration raid that shook Postville, Iowa, in 2008.

Some 1,000 federal, state and local agents descended on the tiny town, population 2,200, and arrested 389 undocumented immigrants working at the town’s largest employer, Agriprocessors, then the nation’s largest kosher slaughterhouse. To mark the anniversary, immigration rights activists in Iowa organized an interfaith commemoration in Cedar Rapids, the state’s second largest city, where the detainees were taken for processing.

Sunday being Mother’s Day, though, the organizers decided to assemble on Friday, May 10. The original starting time was 3:00 p.m., but it was moved to noon so that a key speaker, Rabbi Morris Allen, could get home to the Twin Cities before Shabbat. Allen was an early leader of the Jewish community’s response to Postville — his is the nearest community with a significant kosher consuming population — and a commemoration wouldn’t be complete without him.

The raid itself was a watershed event. It was the biggest single-site immigration raid in U.S. history to that date. It also marked the first mass use of criminal charges rather than simple deportation in immigration enforcement. Nearly 300 pled guilty to document fraud, based on fake IDs they used to get jobs, and served five months in prison before being deported to Guatemala and Mexico. Families were split up, the town was devastated and the company eventually went bankrupt. They’ve all recovered, more or less, but the wounds are still raw.

The plant’s practices also touched off a nationwide Jewish debate over the meaning of kosher laws. That’s progressed a bit more unevenly.

Speaking by phone before the event, Allen was fired up and ready to go, but there was a tinge of melancholy. Of course, he said passionately, what happened in Postville in 2008 was shocking. Of course it showed the need for immigration reform so that immigrant workers can come out of the shadows and “become part of the American tapestry,” he said. Reform is needed, too, to deter the human traffickers who supply American business with low-wage workers. All true, and he’s proud to be involved.

But that’s not what first brought him to Postville. He took notice two years before the raid — Memorial Day weekend 2006, he remembers — when the Forward published an investigative report about labor conditions at Agriprocessors.

Our reporter Nathaniel Popper had turned up hard evidence of appalling abuse: substandard wages, inadequate safety measures, horrific accidents, routine short-changing of pay, bribe-taking by shift supervisors and more. Workers feared to complain because many were undocumented and subject to firing or deportation. Many couldn’t risk dismissal because they owed thousands of dollars to the smugglers who brought them over the border.

The story quoted investigators and researchers saying they hadn’t paid much attention to Agriprocessors because they assumed its religious management meant higher ethical standards, not lower ones. The Forward said in an editorial that the Torah’s rules on treatment of workers are at least as detailed as those on food preparation, and asked why violating Sabbath laws disqualifies kosher certification but violating the Torah’s labor laws does not.

“Why is this meat kosher?” we asked.

Why have efforts at reform faltered?

The coverage sparked a nationwide furor and stirred demands for action within the kosher-consumer community. Allen spearheaded a response within the Conservative rabbinate. Together with allies, he formed an organization called Magen Tzedek — “Shield of Justice” — to offer companies an ethical-practices certification supplementing the standard kosher certification. It’s been a tough slog.

Firms want to know that consumers will reward them for the commitment. That can’t be shown until someone tries, and nobody wants to go first. “We had one kosher meat company say they’d be thrilled to be the second to be certified,” Allen said.

And there’s been quiet but fierce opposition from existing kosher certification agencies. Partly that reflects the kosher food industry’s famously sharp-elbowed business culture. Partly, too, it stems from what Allen calls “a disease inside the Jewish community”: Some folks “can’t believe the Torah can ever come from outside their own community.”

To people all too accustomed to attacks on their religion, questioning their ethics feels like one more attack. Result: They circle the wagons.

Reactions among Orthodox Jews were strong, too, but the Orthodox institutional response was muted. Some community leaders said they couldn’t link kosher certification with other issues that aren’t under the Jewish community’s control.

“Fair treatment of workers is an important issue,” one leading rabbi told me, “but it’s not our job to judge it. We have to trust the government to supervise it. As long as a company is observing the law, we can’t get involved.”

That was the situation in May 2008, when the government descended on Postville. When the feds showed up, though, it wasn’t to protect the workers but to round them up

Suddenly, Postville was all about immigration. It no longer represented a debate within the Jewish community about the meaning of Jewish ethics. Now it was an escalation of America’s border wars, with the nation’s largest kosher slaughterhouse as the poster child for abuse.

It didn’t help that, as some accounts emphasize, Agriprocessors CEO Sholom Rubashkin, a Lubavitch Hasid, had his immigration charges dropped, as if to say: The little guys get nailed while the big guys walk.

You wouldn’t know from these accounts, including some notices for the May 10 commemoration, that Rubashkin was convicted on 86 counts of financial fraud, based on material found during the raid, and sentenced to 27 years in prison. The immigration charges were dropped, along with child labor charges, because the feds figured they wouldn’t add to the already stiff punishment.

Four other plant officials were convicted on immigration and document fraud charges, and three faced child labor charges. Two managers indicted on document charges fled to Israel, but one, an Israeli Arab, was returned to Iowa to stand trial on May 3. In fact, the one major category of crime that wasn’t punished was the one that started all the fuss: labor abuse.

“The tragedy is that Immigration and Customs Enforcement did the raid and not the Department of Labor,” said Allen. “But that’s the way America operates.”