Why Can’t Israelis and Palestinians Both Be Right? 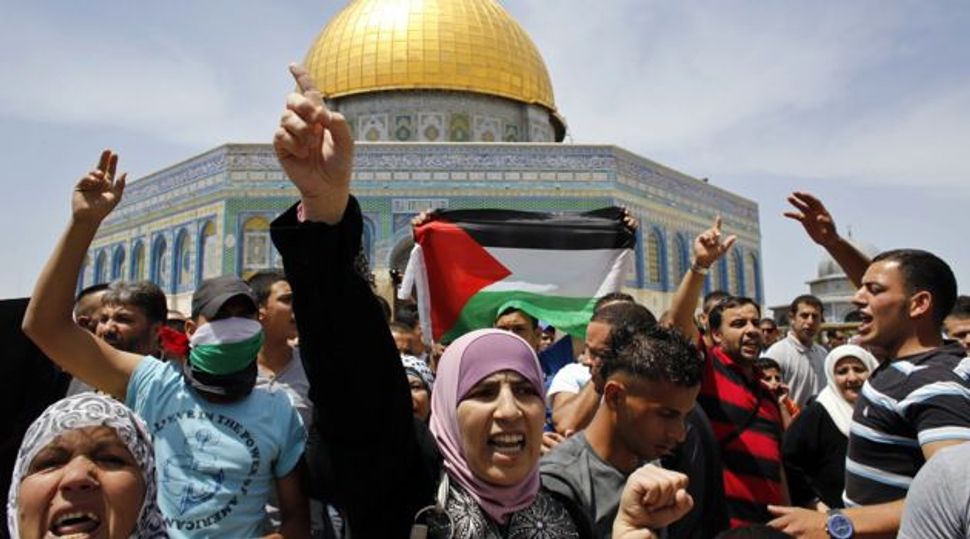 Celebrate or Mourn?: On Nakba Day, Palestinians gathered in front of the Dome of the Rock. Image by Getty Images

A new study published by The Proceedings of the National Academy of Sciences and reported in The New York Times on May 14, informs us that (1) “For years, scientists and engineers have noticed an increase in river flows when the trees along the streams are removed. The water in the soil, which would otherwise have been taken up by the tree roots and sent into the atmosphere, instead moves directly into streams and rivers.” Obvious, no?

Not quite. The Times goes on to say that (2) “At the same time, large areas of tropical forest actually create rain clouds as moisture from their leaves evaporates. So the elimination of swaths of these forests decreases rainfall. Cut down enough trees, the scientists argue, and the indirect impact of lost rainfall outweighs the direct impact of removing trees.”

A metaphor, no? Two contradictory assertions, and both are true. So much of life is riddled with such contradiction. Which brings me, of course, to the Israel/Palestine conflict and the Two State Solution.

Which is the aggrieved party in the continuing conflict? Is it the Israelis, victims of terrorism, or the Palestinians, victims of the occupation? Or is it both? I write in mid-May, the season when we remember and celebrate Israel’s Independence Day — and then “they,” the Others, mark the Naqba, the catastrophe. Can both be right? If both partake of rightness, is one more right than the other? This is assuredly not a zero sum game, in which any increase in one side’s rightness means a concomitant decrease in the other side’s. Indeed, that’s the whole point here.

In fact, one can frame the question quite differently: Let’s concede that from a Palestinian point of view, the occupation is, indeed, a source of misery. Does it necessarily follow that from an Israeli point of view, it is more a positive than a negative?

If so, then what am I to make of a book that arrived in the mail this very morning, a book edited by two estimable Israeli scholars, Daniel Bar-Tal and Izhak Schnell, entitled “The Impacts of Lasting Occupation.” It is a dense book, and I wouldn’t dare to offer a summary of it. But here are two of its dust jacket blurbs: “A profound and serious book, a must read for those wishing to understand and even try to block the gradual yet ongoing decline of the State of Israel from its (supposedly temporary) military occupation into an apartheid driven binational state whose Zionist fate is doomed.” Those are the words of A.B. Yehoshua, one of the giants of contemporary Hebrew literature. And then Daniel Kahneman, Nobel Laureate in Economic Sciences, author of “Thinking, Fast and Slow,” has this to say: “Voices were raised in Israel in 1967, warning the country of the damage that prolonged occupation would do to the occupier. This book tells the story of how those warnings were ignored and how they came true.”

The truth is more complicated than water and rain clouds. In 1969, at a press meeting, Minister of Defense Moshe Dayan said, “Only in another ten years shall we know whether the territories are conquered or liberated.” Indeed, the term “occupied,” as distinguished from liberated, was largely a term of Israel’s left until, on May 26 of 2003, Prime Minister Ariel Sharon publicly used the word “occupation” for the first time. And even now, approaching a half century of the occupation, there are substantial numbers of Israeli Jews who bridle at the notion that the West Bank — in their discourse, Judea and Samaria — are occupied. Such people believe that Judea and Samaria are part of the Jewish patrimony, not available for bargaining and negotiation, immune from serious compromise, and they are less likely to lament the toxicity of occupation than they are to ignore or even deny it.

Much does hinge on terminology, and the relevant terminology has been fluid. Nor does the use of one term or another tell us much unless we are familiar with the context on which the speaker draws. What did Sharon actually mean when he used the term “occupation” or when he spoke of his readiness for “painful compromises” for the sake of peace — a phrase reiterated by Prime Minister Benjamin Netanyahu, most notably in his address to a joint session of Congress in May of 2011, when he noted that “We seek a peace in which they [the Arabs] be neither Israel’s subjects nor its citizens. They should enjoy a national life of dignity as a free, viable and independent people living in their own state,” or when he echoed the Sharon pledge to accept painful compromises?

But: The prevailing Israeli sentiment is that Israel “has no partner for peace,” hence no one with whom to compromise. Unless and until President Abbas can bring himself to say that he and other relevant leaders accept Israel as a Jewish state, there’s nothing to talk about, hence no partner for peace, a phrase that has been incessantly drummed into the Israeli public for decades now. (Why such importance to Palestinian acceptance of Israel as a Jewish state? Try this: The moment that formulation is adopted, the issue of the Palestinian refugees’ right of return disappears.)

A few days ago, I participated in a scholarly conference that included as one of its themes the vexing question of how we promote an intimacy with Israel among the younger generations. No magic bullets were proposed. We need, everyone felt, to be honest in our depiction of the conflict between Israel and the Palestinians. But in order to accomplish that, we have to be honest with ourselves.

Why Can’t Israelis and Palestinians Both Be Right?