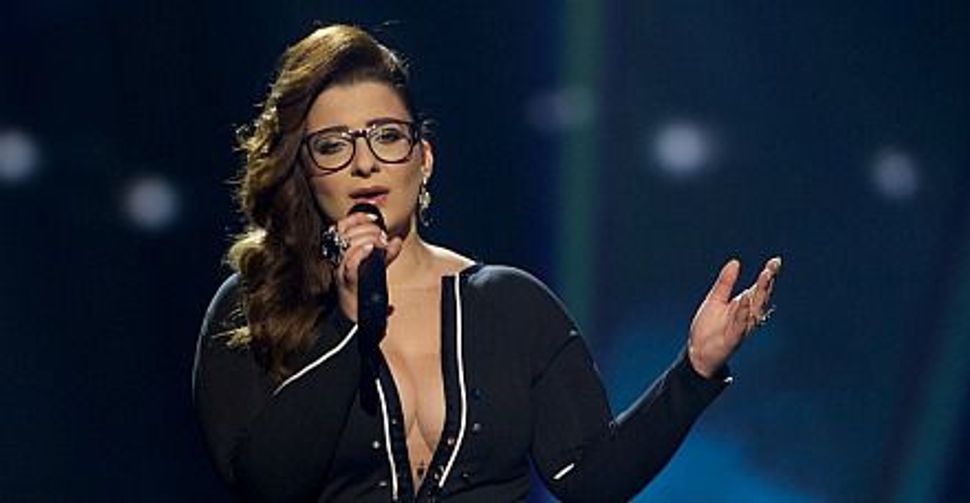 A Romanian opera singer dressed like Dracula and wailing falsetto. Dancers in a Perspex boxes and drummers dosed in baby oil. Moustachioed Greeks dancing and singing about the joys of free alcohol. A Russian plea for world peace in three minutes with a key change.

In case you missed it, that was the Eurovision Song Contest, Europe’s annual festival of music, costumes, and lights that at once unites, divides, and simply baffles the continent. And the winner wasn’t half bad this year. Denmark’s Emmilie de Forest sang “Only Teardrops,” a steady tune with a smattering of drums and Celtic pipes, and won 281 points, including the maximum points from eight countries, beating out Azerbaijan and the Ukraine respectively.

Absent once more from the spectacle was Israel. Since Harel Skaat placed 14th in the 2010 final with “Milim” (“Words”), Israel has failed to make it out of the semi-finals on three successive occasions. This year, Israel entered the talented if unknown reality show winner Moran Mazor, and her ballad “Rak bishvilo” (“Only for him”) fell flat in the semi-final, finishing 14th out of 17 acts.

For its size, Israel has a very strong record in Eurovision. Since it first entered in 1973, Israel has won on three occasions – including back-to-back in 1978 and 1979 with “A-Ba-Ni-Bi” and “Hallelujah” – and has come second twice and third once. This is more remarkable given Israel hasn’t even submitted an entry every year, missing the contest when it has fallen on the memorial days Yom HaShoah or Yom Hazikaron.

However, following Dana International’s triumph in 1998 – when, incidentally, she became the first transgendered artist to win the contest – Israel’s record in Eurovision has been patchy at best. Shiri Maimon’s 4th place finish in 2005 was the highpoint in an era that has seen Israel miss out on the final five times. When Israel has qualified for the final, it has finished in the bottom half more often than not, including 23rd out of 24 in 2006, scoring just 4 points.

It would be easy to suggest that Israel has been the victim of dramatic changes made to Eurovision’s format in the last twenty years. Since 1993, the number of participants has increased considerably, with the introduction of nations from eastern Europe and the former Soviet Union. This, combined with the replacement of national juries with mass televoting, has beget entrenched regional voting blocs: Scandinavia; Greece and Cyprus; the former Yugoslavia; and the CIS nations. Countries like Israel, the United Kingdom, and Ireland who were once successful (and now are decidedly not) all point to this as the source of their downfall.

But speaking to The Forward, Gil Laufer, an editor for ESC Today, suggested that to argue Israel’s lack of success is attributable to some reflexive dislike amongst the voting public is too simplistic an explanation. After all, when Israel has submitted decent songs like Maimon’s “HaSheket SheNish’ar” (“The Silence That Remains”), they’ve been rewarded. “It’s common to say here that ‘everyone is anti-Semitic’ and that everyone hates Israel. But we have managed to show that when we deserve a good place, we get it. When the crowd was shouting ‘Israel, Israel’ before announcing the last finalist of the second semi-final this year, I don’t think that it’s because they hate Israel.”

Laufer also doesn’t believe Israel has suffered from other major rule changes, including the decision in 1999 to allow artists to sing in languages other than the national tongue. Since then, all the winners bar one (Serbia in 2007) have been performed in English, while the Israel Broadcasting Authority maintains a rule which stipulates that at least half of its nominated song must be sung in Hebrew. Laufer supports this rule, arguing that as Hebrew is “a beautiful language, if the song comes across in the right way, it can only help Israel. Many fans appreciate Israel as a country which doesn’t send trashy pop music every year.”

Thus if Israel’s recent failure isn’t attributable to external factors, the problem is internal. Israel has no clear or consistent way of selecting its Eurovision entry. Since 1998, “Israel has had five internal selections, six national finals for an internally chosen singer and five open national finals. There is something different every year, and the juries and the committees who are responsible for selecting the song are mostly old-fashioned and choose something that might be good for their ears but not for Europe.”

This contrasts dramatically with this year’s host nation, Sweden, which is famous for its grand Melodifestivalen. This annual music competition is consistently one of the most-watched shows on Sweden television, and both the public and music industry professionals have a hand in the selection their Eurovision entrant. Since 1998 when Israel last won, Sweden has finished in the top five on no less than seven occasions, including two victories, and has only missed out on the final once.

In Israel, meanwhile, Laufer observes that “much of the public don’t care about Eurovision. With all the commercial channels around, people hardly watch IBA unless there is a special sports event on. Many people say that our time in Eurovision is over and we should quit, and famous Israeli artists refuse to take part in the contest or in the national finals. In this year’s selection, all artists were refugees of reality shows or other unknown people. The Israeli entries are not played on the radio, and less than 100,000 households watch the competition every year.”

“Only when Eurovision is taken seriously, like in Sweden or Denmark,” Laufer concludes, will Israel “get back on track and (at least) make it to the final again.”