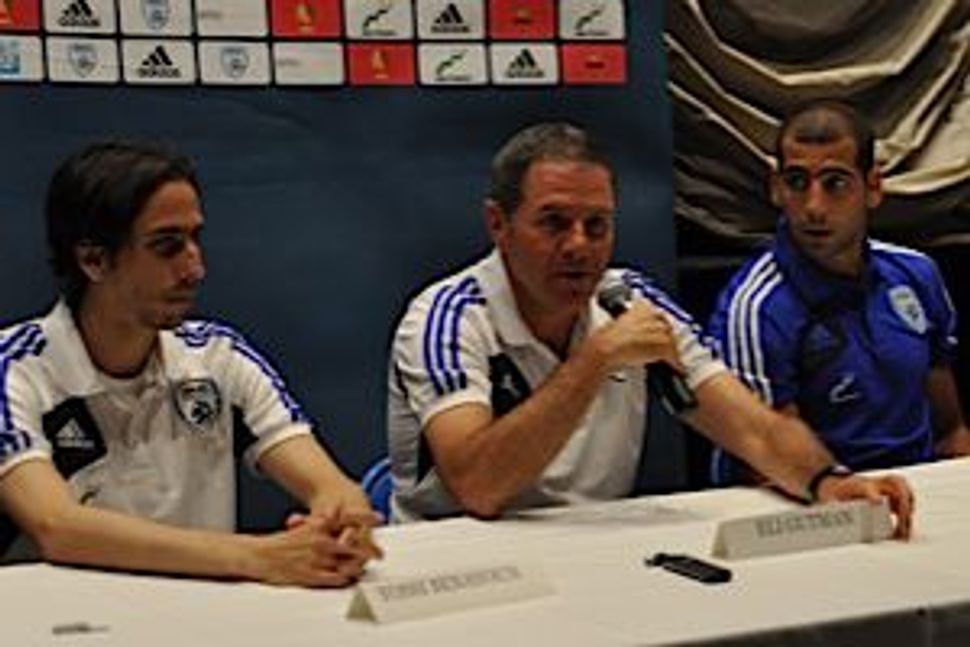 Just Like They Pictured It: Yossi Benayoun, Eli Guttman and Tal Ben-Haim in New York on May 31. Image by Courtesy Schnur Associates

Chelsea midfielder Yossi Benayoun says he is “trying everything to play in the MLS next season” ahead of the Israeli national team’s soccer friendly against Honduras in New York on Sunday, June 2. The game, Israel’s first in New York for over 35 years, will take place at Citi Field, after the annual Celebrate Israel parade.

The English Premier League star, who won a Europa League champions medal with London giants Chelsea this season, said that he is currently in talks with several clubs. His contract expires in June and “playing in America is one of my favorite options and I am trying everything to find a team in the MLS.”

The Israeli national team captain, and former Liverpool and Arsenal player, denied that his wishes to leave the English Premier League are a result of his being a repeated target of anti-Semitic hate speech on Twitter from British fans, saying that he thinks “the whole issue was exaggerated.” Benayoun continued to say that “there are racist people all over the world, even in Israel, and I don’t pay attention to those people no matter where I play.”

Another Israeli star who is expecting to take his talents to the MLS is defender Tal Ben-Haim, currently with the just-relegated EPL team Queens Park Rangers. The former Chelsea and Bolton player is reported to be in advanced negotiations with the Canadian MLS team Toronto FC, coached by his former Q.P.R teammate Ryan Nielsen.

Ben Haim, who was also a subject of anti-Semitic abuse on his club’s official Facebook page earlier this year, said in the press conference in midtown Manhattan today that he “spent a couple of days in Toronto meeting with the team’s coach, owner and chief executive and I was very impressed.”

The press conference was held ahead of the game organized by the French Jewish entrepreneur Pierre Mevi Azaria, who said that if he sees this game is successful, he “plans to try and bring the Israeli national team to other major cities that have a big Jewish population and that would otherwise never get to see the Israeli team.” It is also preparation for Israel’s three upcoming qualifying games for the 2014 World Cup in Brazil.

Azaria, who reportedly paid more than $100K to bring the Israeli national team to play in New York, said “he hopes to at least break even with the event” saying he believes he will sell at least 25,000 tickets to the match Sunday, but claimed that he “won’t be surprised if the event ends up to be sold out.”