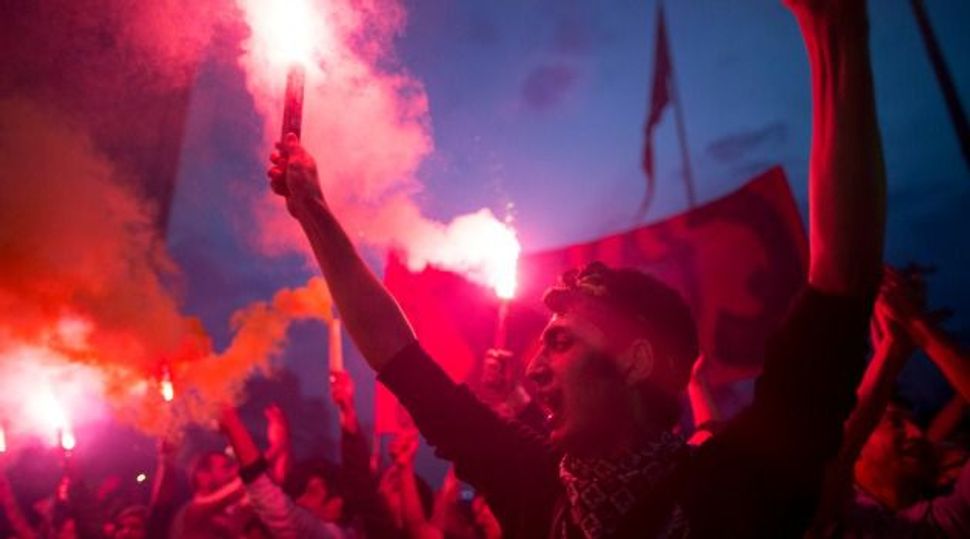 Weeks before Turkish protesters took to the streets, alcohol fueled the flames of revolt. It was not drunkenness, however, that turned up the political heat; rather, it was government rhetoric that denied alcohol’s Turkishness.

He recently justified the introduction of a bill restricting late night alcohol sales by calling the authors of Turkish liquor laws — Turkey’s founder, Mustafa Kemal Atatürk, and Ismet Inönü, Atatürk’s successor — “drunks.” Just a decade ago, it would have been impossible to imagine an elected official slurring Mustafa Kemal Atatürk, despite the fact that he certainly liked the bottle. With all this talk about alcohol as a moral fault line, one wonders: What do Turkish Jews — whose religious tradition sanctifies alcohol rather than eschews it — make of the protests?

In the early 2000s I conducted ethnographic research on Turkish minority citizenship, focusing on Jewish life in Istanbul. In anticipation of the 2002 national elections, Turkish Jewish friends worried that a win by the conservative Justice and Development Party, known by its Turkish acronym AKP, would bring democracy’s demise. I played the American liberal, asking innocently: ”If the majority of Turks want a government that better reflects their (Islamist) ideals, why shouldn’t they have it? Isn’t that what democracy is about?”

References to Hitler’s popular election quietly reverberated among Jewish community members, who watched the polls predict AKP success. A friend informed me of Erdoğan’s win with the following text: “I AM TERRIFIED”; secular Turks melodramatically predicted that Turkey would soon resemble Iran. Over plentiful glasses of raki, and Efes beer, they reassured each other that no matter what AKP politicians preached, their hands were tied by the knowledge that secular army generals stood waiting for their cue to coup.

The coup never came. At the time of Erdoğan’s ascent to power, a representative from the Turkish rabbinate told me that it had a “good, proactive, relationship with AKP” and that it was “wise to keep lines of communication open between us; we live in the same country and should give them a chance.” There was a sense, then, among some Jews that AKP’s neo-Ottomanism might benefit the Jewish community. Unlike the secularist ideology, which erased citizens’ religious identity, Ottoman nostalgia meant that Jews could again represent themselves communally.

Over the past decade, AKP has made sweeping changes in Turkish policy. Through privatization of national spaces, anti-abortion legislation and confrontations with Israel, AKP put its ideology into practice. AKP’s ascendancy came with diminished freedom of expression; journalists, for example, are now arrested in record numbers. (When I asked Turkish Jews what they wanted the Forward’s readers to know about the protests, they universally mentioned a surreal lack of local press coverage about the events.)

A 34-year-old Jewish woman from Istanbul sympathized with protesters defending the “old” Turkey she loved: ”I want to be able to kiss my boyfriend, wear any outfit I want and drink what I want.” She credited Erdoğan for making her realize she once dismissed the rights of the pious, but she feared that “covered women” in Turkey won civil rights at her expense. “I don’t care if they want to wear their scarves; let them wear them…in the university, too,” she said. “But let me do what I want. Erdoğan freed one-half of Turkish society and crushed the other, every day a bit more.”

Erdoğan promised greater tolerance for minorities, but many Turkish Jews saw a wolf in sheep’s clothing. Today, my secularist Turkish friends smugly say, “We told you so.” Some Turkish Jews note that if things really deteriorate, at least there’s Israel. But they worry about their Muslim friends. “Erdoğan conquered everything: the police force, the judiciary, the media and the army. The only opposition is the people who love Atatürk, who love the secular republic. But they don’t have weapons, only their bodies,” one friend told me.

Sound familiar from revolts elsewhere in the Middle East? Many warn against Arab Spring comparisons, saying that Turkish democracy must be understood in its own context. Nonetheless, the post-protest futures of non-Muslim citizens across the region should be a global concern. Jews (and other non-Muslims) are indigenous to Turkey and the Middle East; they are not recent immigrants to be “tolerated.” The role Islam will play in Turkey’s future is yet unknown, but we should focus on how governments manage the shifting ties between politics and religion. Protesters in Turkey might not agree on whether the national drink should be the yoghurt-based ayran, or alcoholic raki, but let’s not forget those Turkish citizens whose religion does not force them to choose between the two.

Marcy Brink-Danan is a professor of sociology and anthropology at The Hebrew University of Jerusalem, and the author of “Jewish Life in 21st-Century Turkey: The Other Side of Tolerance” (Indiana University Press, 2011).