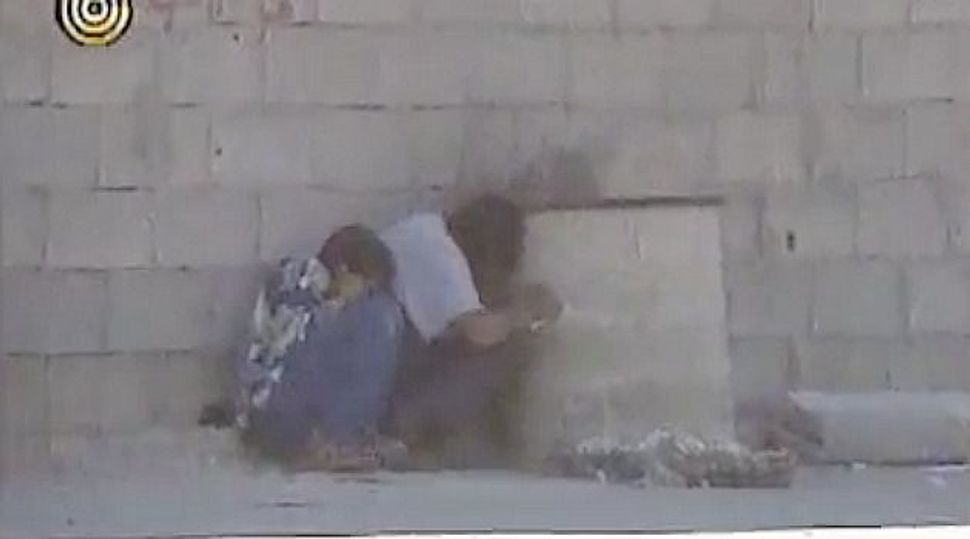 Enduring Dispute: This iconic image shows a Palestinian boy identified as Mohammed al-Dura cowering on a Gaza street during an Israeli attack. But did he really die ? and does it really matter? Image by youtube

The death of Mohammed al-Dura, the 12-year-old Palestinian boy whose iconic last moments have been captured on postage stamps all over the Middle East, happened almost a year before the September 11 attacks, on September 30, 2000. Thirteen years have passed since a cameraman for France 2 captured the horrifying scene of a father and his child caught in Israeli-Palestinian crossfire at the Netzarim border crossing into Gaza at the start of the second intifada.

In the time that has elapsed, thousands upon thousands of innocent young children have died — in Iraq, Afghanistan and the Congo, to name just a few conflicts that leap immediately to mind. And yet, it is the story of Mohammed al-Dura, a boy who died before the dawning of our decade of extreme violence, who remains the potent symbol, the subject of accusations and recriminations, and intense emotion.

We know the impact that image of a cowering, scared boy had on the Arab world. He was, all in one, the little Warsaw Ghetto boy with his hands in the air, the Vietnamese girl with her body covered in napalm, the Sudanese child about to be devoured by a vulture — and, the pieta, an image of the suffering Christ. Osama bin Laden cited Mohammed’s death as an inspiration. A copy of the famous image was in the background of the video in which Daniel Pearl was beheaded.

But it’s not just the Arab world that became obsessed with this symbol. Israel did, too. The latest marker of that obsession is a report issued in May by the Israeli government, commissioned directly by Benjamin Netanyahu, proclaiming Israel’s total innocence in the incident.

For some time now, respectable disinterested sources (including the journalist James Fallows, in a fascinating 2003 piece in The Atlantic) have doubted whether it was Israeli bullets that really killed al-Dura. After extensive forensic tests, it seems plausible that it was Palestinian gunmen who fired the shots that killed him and injured his father. But this new report goes even further, positing that, contrary to the initial French broadcast’s “claim that the boy is killed, the committee’s review of the raw footage showed that in the final scenes, which were not broadcast by France 2, the boy is seen to be alive.”

The conclusion, after pages and pages of examination of milliseconds of film, is that the whole thing was either a completely staged event or that it really happened but the boy wasn’t shot and didn’t die.

The arguments and counter-arguments will go on forever, each side seeing what it wants to see. Did Mohammed’s hand move at the end of the film because he was in his death throes, or was he signaling to the camera? You can watch the footage 1,000 times — and some have — and never know what to think.

But the really fascinating question is this: Why does Israel feel the need to return to this story, almost pathologically unable to quit the scene of this crime? Who was the intended audience of this report?

The appointed government committee was rightly criticized for not interviewing any of the individuals who might counter the Israeli narrative. They did not speak with Charles Enderlin, the France 2 reporter and Israeli citizen who has insisted on the truth of his initial report; the cameraman who shot the footage, or Mohammed’s father, Jamal al-Dura, who recently told Haaretz that he would be willing to “do anything to reveal the truth, including opening my son’s grave.”

But even if they had conducted a more thorough report, short of producing a 25-year-old Mohammed al-Dura alive and well in Gaza, it’s hard to see how it was meant to sway anyone who at this point is not already inclined to the Israeli perspective. As the reporter Barak Ravid succinctly put it, changing the narrative now is like “trying to put the toothpaste back into the tube.”

It must be aimed, then, at Israelis, a way to reinforce a story they need to hear about themselves. The report lends credence to this idea. It is formulated as a response to an incident that, the committee writes, “served as inspiration and justification for terror, anti-Semitism and Israel’s delegitimization.”

From this starting point, how could the panel come to any other conclusion but to absolve Israel from having brought these calamities down upon itself? All they had to do was remove one bullet from a 12-year-old’s abdomen. If the bullet never hit, then the whole newsreel that follows could be unspooled — all that follows, from boycott campaigns to cartoons depicting Israelis as bloodsuckers. None of it happens.

It’s from this place of magical thinking that Israel finds itself still riveted by al-Dura’s death, as the media event that first made the world so unanimously respond in disgust to the Jewish state. Behind this desperate desire to reveal his death as constructed, as an event made up for the media, is embedded Israel’s own distress at the pariah it has become in so much of the world. Erase al-Dura and you erase that.

On the left, news of yet another Israeli response to al-Dura’s death was met with bewilderment. As Open Zion put it, why would the Israelis decide again to stir up “this hornet’s nest?” But while it’s easy to write this off as another tone-deaf attempt at hasbara, Israel once again awkwardly trying to make its case, to me the report is sad. It’s a message directly from the Israeli psyche, raging against its own failure to present the face it wants to present to the world, one of essential goodness, one of righteous purpose, and not a country that kills small children.

Gal Beckerman is the Forward’s opinion editor and writes a monthly column about the media. Contact him at beckerman@forward.com or on Twitter, @galbeckerman.