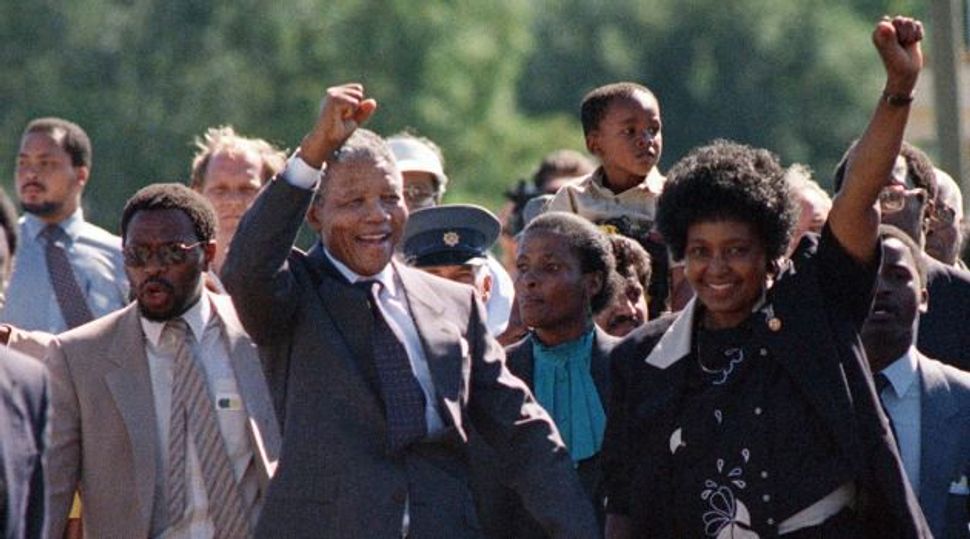 Two Sides: Nelson Mandela greets supporters after being freed from prison in 1990. Despite his status as a beloved icon of democracy, Mandela also had some moments when he made Jews uncomfortable. Image by Getty Images

Nelson Mandela, who died December 5, has come to symbolize the triumph of hope over despair, of love over hatred, and of goodness over evil. I have recently written what an inspiration he has been to me personally as a rabbi who led a congregation in South Africa in the immediate post-apartheid period.

I wrote that he was a model for how we can and should live our lives. And all of that is true. He is the closest that we will get to absolute integrity and selflessness. But there is another side to Nelson Mandela — and many of his closest comrades — that is troubling to many Jews, including myself. We need to see both sides of Mandela to fully understand the man and his unique position in contemporary history.

Mandela is a complex figure, far more complex than is generally understood by non-South Africans. Let me cite one minor episode, which sheds a bit of light on this contradiction. When Mandela gave up his position as president of the African National Congress to Thabo Mbeki — the first step to retiring from politics two years hence in 1999 — he almost immediately gave a fiery, five hour speech on December 16, 1997, in Mafikeng that was perceived by many as being uncharacteristically radical, overtly hostile in tone and menacing in imagery. Many Jews in particular, fearful because of understandable historical reasons, found his rhetoric completely inexplicable, even frightening.

American journalist Richard Stengel writes that when they heard excerpts from the speech, many white South Africans felt betrayed. In the speech Mandela attacked whites for clinging to apartheid privileges, criticized the “white dominated” media, and described a white “counter revolutionary network” whose goal was to undermine South African democracy.

“Could this be our beloved ‘Madiba,’ our smiling symbol of racial harmony in the rainbow nation?” Stengel imagined many white South Africans thinking. How could such a loving, forgiving man say such things?

However, such an understanding of Mandela is superficial and outright false. Mandela, according to Stengel, has always had two faces vis-a-vis the white population: the “kindly and now-familiar father figure in beautiful print shirts who kisses children and talks about letting bygones be bygones” and the “stone-faced ex political prisoner who harangues them about conspiracies and residual racism.” Mandela’s speech at Mafikeng should not have been a surprise, as he has always had to maintain the dichotomous aspects of his character and views.

Mandela did a wonderful job of achieving a popularity among whites that would make any politician anywhere in the world envious. Because of the unique circumstances of the country during his presidency, minority groups including Jews viewed him with admiration and veneration.

But we forget that just a decade earlier he was still seen by many as a terrorist and a threat to social order. But that image is gone, buried under so much newer images that we have needed to emphasis. And so the old stereotypes — mainly false but not entirely so — have been forgotten or at least pretty solidly repressed.

So the idyllic image of the pacifist Mandela who preached love 24/7 was never entirely true. The Jewish community’s attitude toward and interactions with Mandela were much more mixed, depending on whether he was showing his moderate or his radical side. Some of his actions inspired respect, while others have generated suspicion and fear.

Certainly, relations looked good from the outside. In the early stages of its creation, the Jewish community joined with most of the rest of the country to support the new government. When Mandela was inaugurated on May 10, 1994, Orthodox Chief Rabbi Cyril K. Harris was one of four spiritual leaders to deliver a prayer. This was the first time in the history of the country any non-Christian faith had been recognized at this sort of ceremony. Everyone in the Jewish community was proud.

However, Mandela’s radical side made South African Jews apprehensive. For example, just two-and-a-half weeks after his release from prison, on February 28, 1990, Mandela, the obvious leading candidate to be leader of the new, nonracial South Africa, met PLO leader Yassir Arafat in Lusaka, Zambia. Mandela gave Arafat a huge hug, the photo of which was printed on the front page of all the South African papers.

This was long before Arafat had made a political agreement with the Israelis; in fact, in 1990 he was regarded by most Jews around the world as a totally unreconstituted terrorist. To make it worse, the next day, when a reporter asked Mandela for his response to the fact that his meeting with Arafat and his equating of the struggle of Palestinians with that of the blacks in South Africa might alienate South Africa’s Jewish community, he responded that this would be “too bad.”

The episode made Jews in South Africa, and around the world nervous. Over time the view of Mandela’s action has been colored by the PLO becoming a more legitimate organization and by Arafat dealing with the Israelis. Mandela’s policies had not changed, but the PLO had changed dramatically, at least in how it came to be perceived by the mainstream Jewish community, which reduced the discomfort felt by the Jewish community of South Africa because of his foreign policy.

Following this 1990 incident, Harris appealed to South African Jews not to let one picture of Nelson Mandela hugging Yassir Araft put them off; he called for a sense of balance. Harris was speaking before two thousand Jews at a meeting at the Schoonder Street Synagogue in Cape Town, held in response to the recent burning of the Israeli flag by the right-wing Afrikaner Weerstandsbeweging (Afrikaner resistance movement, AWB). Harris said that the AWB did not represent white opinion but was a “fanatical fringe,” adding that Jews should not become too hysterical at what the AWB said or did because the AWB would never lead the government of South Africa, but in five or ten years the ANC might very well be the government.

“We should be very careful not to close the door on the ANC or any genuine black African group,” he said.

Statements made by Mandela that likened the anti-apartheid struggle to the Palestinian struggle needed to be taken seriously but should not be allowed to spoil relations that might prove critical in the near future.

Since becoming President, Mandela openly embraced countries that were loyal to him during his long exile, such as Cuba, Iran, and Libya. The support of countries that were opposed to Western interests — some would go so far as to describe them as world pariahs — began to have a negative impact, especially on Jews, who were sensitive to the policies of these countries.

For example, in late 1997 Mandela visited Libya and opposed the sanctions that had been imposed against Libya after the 1988 Lockerbie Pam Am Flight 103 explosion. Particularly galling to many observers was that Mandela hugged and kissed Libyan leader Muammar Qaddafi exclaiming, “My brother leader, my brother leader.”

Although Mandela is viewed almost universally as a saint, actions like these aggravated many white South Africans, in particular South African Jews. In fact, when they were able to speak frankly, many Jews told me they were less than pleased with the Mandela government’s priorities.

Yvonne Lewin, one of my congregants in Cape Town, wrote me in November 1997, “The country continues to deteriorate into a Third World nation in so many ways, and it breaks my heart when I think of my beloved South Africa and Cape Town. Mandela is not interested in the slightest in helping to bring crime and violence under control — he’s far too busy poking his nose into every other country’s affairs and cozying up to the likes of Gadaffi and Castro. And now he wants to get involved with Iraq. And for this we are all supposed to get down on our knees and worship him?”

As president of the new South Africa, Nelson Mandela accomplished a great deal. Notably, he kept the country together during a time when it could have splintered into factions, opening the way for civil war and/or mass slaughter. This is due in part to his personal generosity of spirit and in part to his incredible charisma. He was a genuine political genius who truly believed in what he preached. Mandela was a model of loyalty and faithfulness. But no one can be all good and no one can represent what he sees as the vital interests of one group without threatening other groups. We have to understand the duality in his thought in order to truly appreciate Nelson Mandela the man rather than some iconic image that represents myth rather than reality.

Dana Evan Kaplan is the rabbi of the United Congregation of Israelites, in Kingston, Jamaica, and former rabbi of Temple B’nai Israel in Albany, Ga. His forthcoming work is “The New Reform Judaism,” to be published by the Jewish Publication Society in the fall.