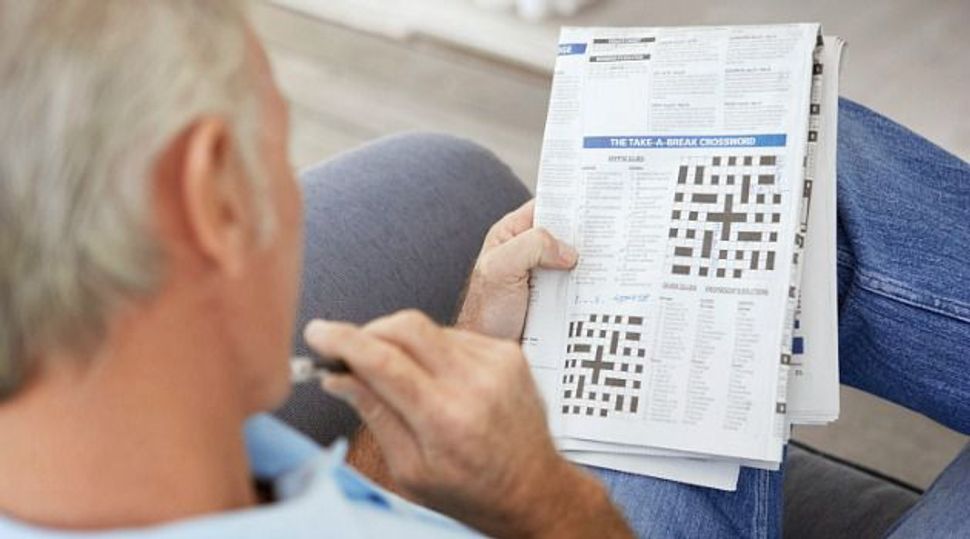 For me, it started with a thrown penny. It clattered to the parking lot asphalt of the swim club I frequented as a child, and in my innocence I bent to pick it up, looking around to see who had lost it. Two teenage girls stared at me, giggling, and refused to take back the money I thought they’d lost.

My strongest memory of this odd exchange was the look of sadness in my parents’ eyes as they struggled to explain to me what was being implied in the midair arc of a tossed coin. It was the first in a lifetime of experiences that made me sensitive to what it means to be a Jew.

There are 225 squares in the average daily crossword puzzle, and on Friday, June 28, three of them in the Los Angeles Times crossword by Victor Barocas spelled out “Jew.” It’s not an unusual entry on its own.

The New York Times crossword puzzle, edited by Will Shortz, has featured the word “Jew” a total of 18 times since 1996. (Full disclosure: I have constructed crossword puzzles for both publications, and I write the crossword blog “Wordplay” for The New York Times.) What made the L.A. Times appearance different was that Barocas, who is Jewish himself, decided to use the clue “Shylock” to hint at the answer.

And that’s when things got meshuga.

To make a long story short, the Anti-Defamation League demanded an apology for the use of a racial slur, and the Tribune Media Services, which distributes the L.A. Times crossword to more than 1,000 newspapers, promptly apologized. Barocas, reached via e-mail, bore full responsibility for the clue, saying: “When I wrote the clue, I had no idea that it would offend anyone; as a Jew, I would not have been bothered by it had I encountered that clue in a puzzle. Obviously, though, I offended people, and I am sorry for that.”

Constructing a crossword puzzle is an interesting combination of art and marketing. Constructors work closely with editors to make sure not only that their entries and clues are well written, but also that they fit the audience for which the puzzle is intended.

I say this as someone who has built puzzles for vastly different markets. What might fly with one demographic might be verboten in another. If Barocas meant to clue the entry “Jew” as the character in Shakespeare’s “The Merchant of Venice,” whether a solver believes that to be tasteful or not, then that might have been one reason that it escaped the red pen, simply because it’s factual: Shylock the dramatic character was a Jew.

Crossword blogger Amy Reynaldo, head writer of “Diary of a Crossword Fiend,” made this distinction: “When the word in question appears at the beginning of a clue, it’s capitalized. This leaves it open to (mis)interpretation. Capital-S Shylock is the Shakespeare character, and I think that’s fair game for a clue. But as the first word in the clue, there is no way to distinguish it from little-S shylock.”

Reynaldo went on to say that if the word is offensive to Jewish people, then crossword editors and constructors would be well advised to steer clear of ever allowing anything that can be interpreted as the lowercase “shylock.”

I have to say I agree. Factual cluing gets you only so far, in my opinion, and it’s important to write with an ear for not only what is entertaining, but also what will not offend. The bottom line for any product is whether it will sell, and I personally would not clue the entry “Jew” as “Shylock” in one of my puzzles, not just because I believe it to be off-putting, but also for fear of getting my employer into trouble (a good way to put a damper on my relationships with the few crossword venues that are left). Another published constructor put it this way: “I wouldn’t be too thrilled to see ‘Catholic’ clued as ‘Torquemada,’ for example, even though it is undoubtedly factual.”

So Barocas, though a Jew, would not be offended by the “Shylock” clue, and Deb Amlen. also a Jew, would not use it in a puzzle. There will always be differences in people’s views. The shame here is not so much that the clue was published, but that in all the discussion, practically no one mentioned that the rest of the puzzle happened to be terrific, a lively and sparkling way to pass the time.

Deb Amlen writes the “Wordplay” crossword blog for The New York Times and is the author of “It’s Not P.M.S., It’s You: A Totally Non-hormonal Analysis of Male Behavior” (Sterling Innovation, 2010).