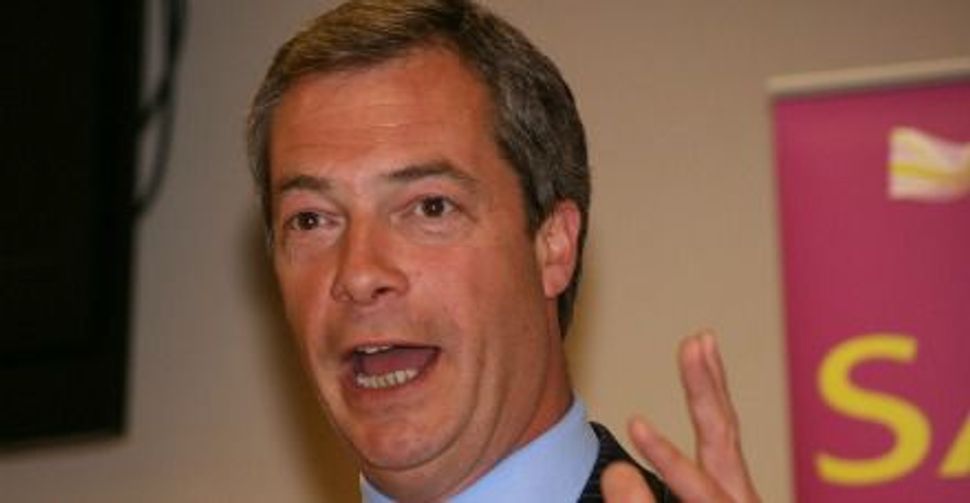 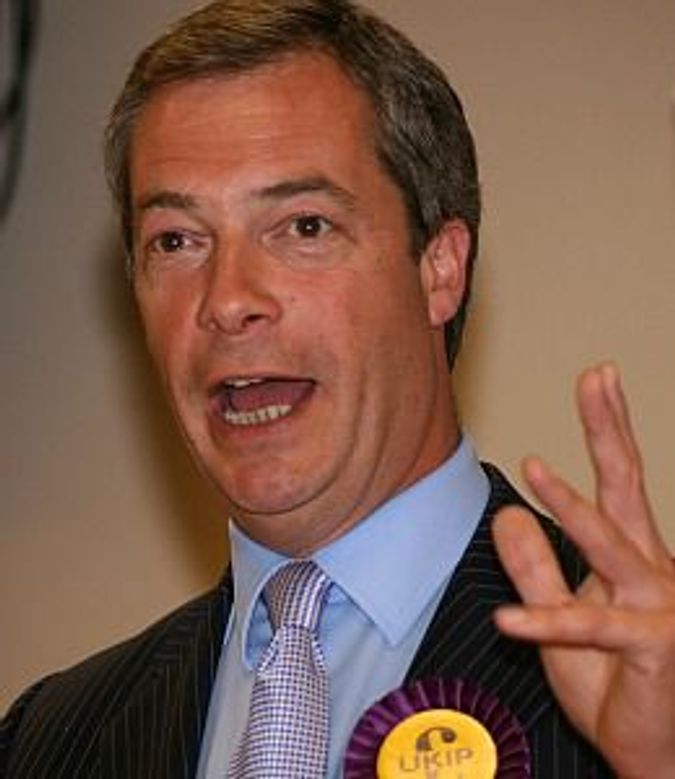 It was ever-so-slightly distressing to see an august community institution like London’s Jewish Chronicle granting a platform to Nigel Farage, leader of the United Kingdom Independence Party (UKIP), on Wednesday evening. As someone who dedicates a good deal of his days to fostering an unwelcome climate for the most vulnerable in society — tarting up narrow-mindedness with libertarian lipstick — Farage’s politics aren’t exactly aligned with consensus Jewish values.

In particular, Farage tramples on the mitzvah to never oppress the stranger. For him, the stranger is the immigrant.

UKIP was founded as an anti-EU concern but of all its policies the one with which attracts voters, opinion polling suggests, is its pledge to put an end “to the age of mass, uncontrolled immigration”. This will be achieved by “a five year freeze on immigration for permanent settlement” and a complete and total end to unregulated internal European migration by leaving the European Union.

When it was put to Farage that he was in fact addressing a room full of the descendants of immigrants and refugees from one time or another, he seemed oddly unfazed. “I’m a refugee, just like you,” he said, pointing out his ancestors were Huguenots who fled to the United Kingdom from France. “They were going to burn us at the stake before we sought refuge here, so there is some commonality there.” Later, Farage conducted a crude show-of-hands which appeared to prove that, in fact, a good number of the 350 in attendance supported the notion that the present level of immigration was unsustainable.

Farage was perhaps less clear or honest about the issues surroundings shechita and brit mila. He asserted that his party held a liberal, nuanced position on these practices, that “whatever our dislikes, we are fundamentally a strong libertarian party that says you may pursue what you wish to pursue, providing that it doesn’t hurt or affect me”. Which would be fine, if polling conducted by YouGov and the Jewish Chronicle didn’t conclude that 71 percent of UKIP supporters favour an outright ban on the religious slaughter of animals for kosher meat and 51 percent a proscription on male circumcision.

Where his opinions slid from being green to simply laughable, however, was on foreign policy, something Farage never talks about because he’s never asked about it. Pushed on Iran, Farage initially said he would oppose an Israeli strike on their nuclear facilities whatever the circumstance – “I do not support acts of aggression, even from countries that feel their existence is threatened” – before flip-flopping and hedging when it was suggested that such an attack could be deemed defensive. It didn’t seem to be something he’d thought about much.

His fuller answer on Western foreign policy towards Iran was even more astonishing:

I think that the West has got Iran wrong. The sanctions approach, the cordon sanitaire, has been a mistake. People always break sanctions, whether it’s Marc Rich or the French, and sanctions also help people like Ahmadinejad foster the view that the West is all against Iran. We should have love-bombed Iran instead! That would have encouraged a more open approach.

Quite what this love-bombing might constitute was anyone’s guess, though allowing greater access to the internet was floated, whatever that means. In general, his language on foreign policy was hopelessly naïve and wishy-washy, from time to time drifting into a populist area occupied by the likes of Ron Paul and the late Gore Vidal.

“I just wonder about our whole strategy with regards to Iraq, Afghanistan, Libya and now Syria,” he said. “We’ve been told through Tony Blair, Gordon Brown, and David Cameron that by intervening we will make the world a better, safer place. We’ve made it more unstable.”

Even on Israel, Farage couldn’t avoid derision. “I’m very sympathetic towards Israel, not least because they’re surrounded by states that want to obliterate them,” he said soundly, but then added separately that he’d only been to Israel once, spending eight hours in Tel Aviv. Tweets on the night labelled that throwaway comment “embarrassing”, with The Times of Israel correspondent Miriam Shaviv remarking that it didn’t seem as though Farage had been briefed very well for a meeting with the Jewish community.

Nigel Farage was received warmly by a few, it should be said — perhaps those who already supported him anyway. Judging from the reaction during and after the event, however, it would appear Farage and UKIP have more work to do if they are to persuade British Jewish voters that he and his party are trustworthy, competent, and sincere.