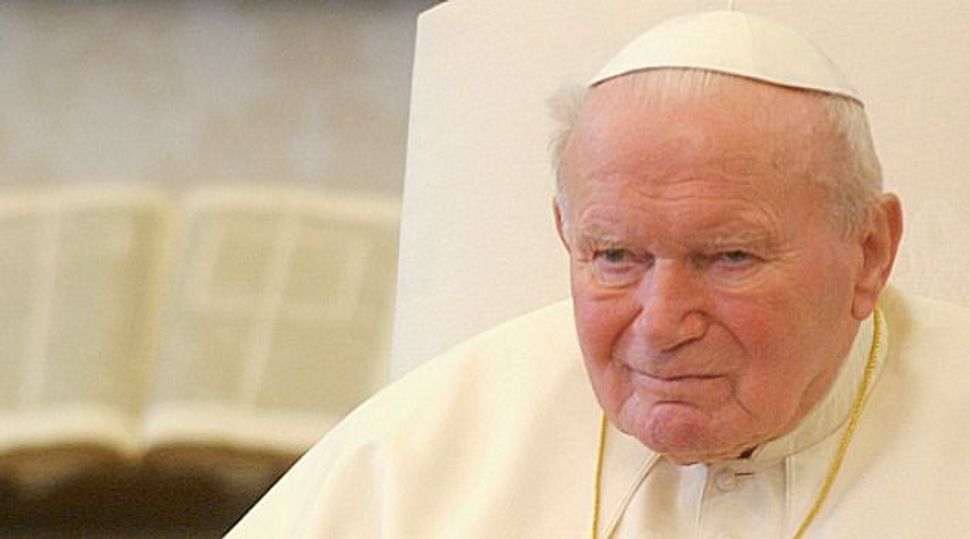 A Sainted Pontiff: Pope John Paul II seemed to have a liberal and conservative advisor perched on each shoulder. Image by Getty Images

The Vatican has recently announced that two popes who were pioneers in Christian-Jewish relations — John XXIII and John Paul II — are leading candidates for canonization as saints in the Roman Catholic Church.

John Paul II was, of course, the pope who followed in the steps of John XXIII in his forthright condemnation of anti-Semitism, and who forged close personal relations, individually and communally, with Jews. The problem is that there were two Pope John Paul IIs.

There is the John Paul II, the Polish Karol Wojtyla, who is richly remembered for his repudiation of classic anti-Semitic church teachings, who radically changed church behavior and, by extension, the paradigms and protocols of Christian-Jewish relations.

Then there is the doctrinally conservative John Paul, whose record when it comes to Jews is more than a tad ambiguous. On the positive side of the ledger were numerous actions that reinforced the principles of Vatican II and “Nostra Aetate”: John Paul II’s 1989 papal document on racism, “The Church and Racism,” which specifically repudiated anti-Semitism; a slew of declarations, including the 1990 Prague Catholic-Jewish declaration on anti-Semitism, which demanded that Catholics take Vatican II seriously and do away with Catholicism’s antagonism toward Jews, and, most dramatically, John Paul II’s intervention in the Auschwitz convent affair, ensuring that there would be “no Christian presence” on the death-camp grounds. It was most unusual for a pope to intervene in the affairs of any bishop, but intervene Wojtyla did in 1993, with good results for Jews everywhere.

On the negative side: The visit on April 13, 1986, of the pope to the Great Synagogue in Rome, with his forthright condemnation of anti-Semitism “by anyone,” rightly celebrated by Jews at the time. There was, however, a big “but.” The formulation used by the pope to refer to the Jews, “You are our elder brothers,” was in fact the language of classic supersessionism, the theological notion that the “elder brother” — the Jews — had gone astray and was superseded by the church, Verus Israel, the “true Israel.”

Further, and related: in 1989 came papal homilies that expressed supersessionism, and then a 1991 encyclical on missionary activity, which appeared to single out Jews.

On the political front there were problems, as well. The 1982 meeting with Palestine Liberation Organization leader Yasser Arafat, the first of two, generated a collective American Jewish “Oy!” Worse in some respects was the 1987 papal meeting, an outrage, with Austrian Chancellor Kurt Waldheim, who had well-publicized Nazi skeletons in his closet. And even worse was Wojtyla’s 1988 defense of the conduct of Austrian and German churches during the Nazi period.

And then there was the matter of the recognition of the State of Israel. A central area of friction during the 1970s and ’80s was the continued reluctance of the Holy See to normalize relations. As a practical matter, the Vatican had, over the years, recognized Israel, de facto; but it was full normalization of relations — de jure recognition — that was sought.

The Vatican itself asserted that there was “no theological bar” — an attempt to quiet those who viewed this area as a remnant of anti-Semitism, of a supersessionist attitude in the church about the Land of Israel. The church insisted that normalization was being held up pending resolution of border and boundary questions.

On its face, this explanation was entirely legitimate. But my own sense is that the Vatican was traumatized by the slaughter of 100,000 Maronite Christians in Lebanon in the late 1970s and early ’80s, and that the church was legitimately concerned with the fate of Christians in Arab lands should full relations be established with Israel. Whatever the reason, there was no great joy in the Jewish community when John Paul II’s Vatican finally, in 1993, did what it ought to have done a decade, or more, earlier, when normalization of relations would have been the courageous and right thing to do.

The bottom line is that John Paul II had two records. On anti-Semitism and generally on the implementation of “Nostra Aetate,” he was more than terrific. He was revolutionary. He changed the church. But on those matters that fell under the doctrinal rubric, this highly conservative pope was capable of causing heartburn for many Jews. What was going on? My own suspicion is that the pope’s advisers were pulling him in two different directions. On one shoulder sat Johannes Cardinal Willebrands, the Dutch liberal who managed Christian-Jewish relations for John Paul II, whispering into the pope’s left ear; while on the other shoulder sat Joseph Cardinal Ratzinger (the future Pope Benedict XVI), a doctrinal conservative, whispering into his right.

Jews everywhere ought to continue celebrating Pope John Paul II, who taught Catholics (and Jews) the true meaning of “Nostra Aetate.” But we should do so with an eye open to the ambivalence that was also an aspect of this splendid pope, and, lo unto the present day, of Vatican-Jewish relations.

Jerome Chanes, a Forward contributing editor, is a fellow at the Center for Jewish Studies at the CUNY Graduate Center and the editor of “The Future of American Judaism,” to be published this year by Trinity/Columbia University Press.