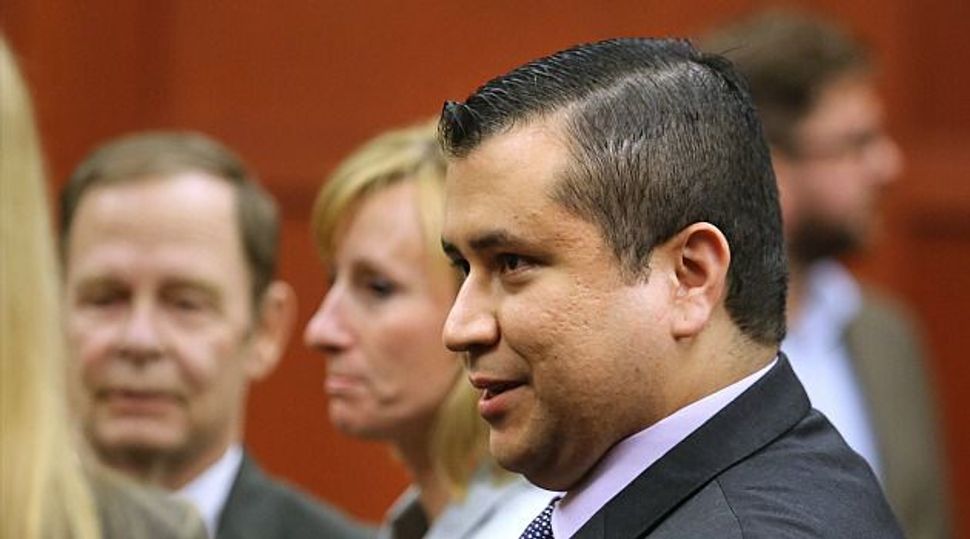 Still in Jeopardy: George Zimmerman beat the rap at his murder trial. But the Crown Heights case shows he may not be off the hook yet. Image by getty images

The preamble to the U.S. Constitution — which speaks of preserving justice, domestic tranquility, general welfare, liberty and, not least, a sense of national unity — could read like a CliffNotes version of the Trayvon Martin-George Zimmerman debate. Taken together, these words suggest that the feds have a duty to intervene. But how?

I’d argue that the most useful precedent is the federal civil rights conviction of Lemrick Nelson for the killing of Yankel Rosenbaum, an Orthodox Jew, during the 1991 Crown Heights riots. The two cases are remarkably similar, and we can learn a lot about one from the other.

At the moment, most legal chatter centers on the possibility of the Justice Department bringing federal hate-crimes charges against Zimmerman, under the so-called Matthew Shepard and James Byrd Jr. Hate Crimes Prevention Act of 2009. That would be a mistake.

The hate crimes law would require the prosecution to prove that Zimmerman “willfully” intended to cause “bodily injury” to Trayvon Martin because of his race. This raises the same problem as the state trial: We don’t know exactly what happened in the moments before the shot was fired. Did Zimmerman pull the trigger because Martin was black? Or was he, at that moment, motivated by fear and self-defense? Intent is crucial in hate-crimes cases.

A strong case can be made that Zimmerman was motivated by race at the beginning of the confrontation, when he saw Martin and decided to follow him. His phone calls to 911 show it. But was he intending at that point to cause injury? There’s no evidence of that. And by the time he grabbed his gun, he may simply have panicked, finding he’d gotten in over his head.

However, a conviction probably could be obtained under another federal statute: the Civil Rights Act of 1964. That’s the law used to convict Lemrick Nelson in the killing of Yankel Rosenbaum. Under its terms, Zimmerman could be charged with the wrong that seems most demonstrably to have been committed: harassing Trayvon Martin because of his race.

Nelson was arrested on the night of August 19, 1991, for the stabbing of Rosenbaum, 29, an Australian visitor staying with Lubavitch Hasidim in Crown Heights.

It was established that Nelson was part of a mob out to avenge the death of a 7-year-old black child who’d been run over that evening by a speeding Hasidic driver. When Rosenbaum appeared there were shouts of “get the Jew.” Police found Nelson hiding in bushes near the crime scene with a bloody knife that tested positive for Rosenbaum’s DNA. Rosenbaum identified him before he died.

In 1992, the jury in Nelson’s state murder trial found him not guilty. After the verdict, 11 of the 12 jurors — 10 blacks and two whites — went out to dinner with Nelson and his lawyer.

The acquittal sparked widespread outrage among New York Jews. Months of protests followed. Rosenbaum’s brother Norman, an Australian attorney, spent much of the next two years in New York and Washington, pressing for a federal investigation.

In 1994, the Clinton Justice Department charged Nelson under a portion of the 1964 Civil Rights Act that outlaws racially-motivated hindrance of a person’s legal enjoyment of public accommodations. Included are lodgings, restaurants and recreational facilities. In the Nelson case, the Justice Department expanded the list to include city streets. Nelson was convicted in 1997 of denying Rosenbaum the use of the streets of Brooklyn by stabbing him, because he was Jewish.

It shouldn’t be too difficult to make the case that George Zimmerman initiated a confrontation with Trayvon Martin with the racially motivated intention of hindering Martin’s use of the streets of Sanford, Florida. The facts seem pretty clear.

Whether a civil rights charge could then be linked to Martin’s death is a separate question. Here again, the Crown Heights case is instructive. Rosenbaum died of internal bleeding after Kings County Hospital failed to notice one of his stab wounds. The defense claimed the hospital error mitigated Nelson’s culpability. But the judge ruled the error irrelevant. Nelson was found to have initiated the racially-motivated chain of events that led to Rosenbaum’s death.

If that precedent is followed, Zimmerman could conceivably receive a lengthy sentence for initiating a civil rights violation that led to Martin’s death.

But Nelson’s 1997 civil rights verdict didn’t stand. An appeals court found the trial judge had taken illegal steps to ensure a diverse jury. When Nelson was retried in federal court in 2003, jurors decided (defying the judge’s instruction) that the hospital rather than Nelson was responsible for Rosenbaum’s death. Nelson was convicted on the lesser charge of racially motivated obstruction and given a relatively light sentence, 10 years minus time served. He got out in 2004.

If a Zimmerman civil rights trial were to follow the narrower precedent of the second Nelson trial, then Zimmerman could serve up to 10 years for depriving Martin of his civil rights. Some might call that too lenient. Others might say it’s overly harsh for a case of self-defense. But it seems to address the core issue of race.

There’s another lesson for today in the Nelson case, and it’s a cautionary one. For many New York Jews, the riots, murder and acquittal got wrapped up in a broader narrative of rampant black anti-Semitism. Fingers were pointed at the city’s first black mayor, David Dinkins. Conservatives accused him of excessive leniency toward black lawbreakers and even outright anti-Semitism.

In turn, many blacks believed the Jewish community was exploiting the Rosenbaum tragedy to weaken Dinkins. The furor helped sink Dinkins’ 1993 reelection bid. On Election eve, when Republican challenger Rudy Giuliani stepped to the microphones to declare victory, Australian lawyer Norman Rosenbaum was at his right shoulder.

That same dynamic may be unfolding on a national scale in the Trayvon Martin case, with angry blacks taking on the role of outraged Jews and white conservatives taking the place of indignant, defensive New York blacks.

The lesson of Crown Heights ought to be that a criminal trial can bring closure when justice is done in fair measure, but when it becomes a symbolic crusade for victory over enemies, it only deepens the bitterness.