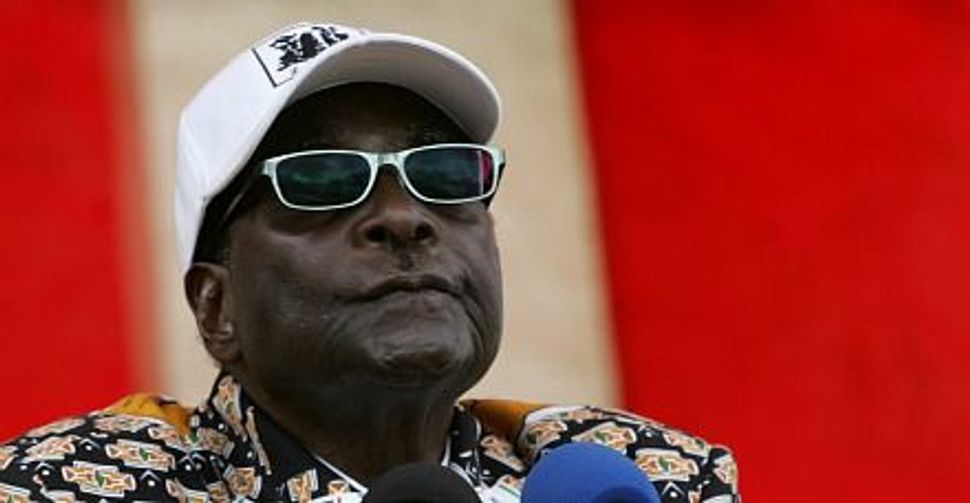 Zimbabwe’s strongman Robert Mugabe has succeeded in staying in office for 33 years with a potent mix of populism and violence — and he may have an Israeli company to thank if he extends his rule one more time.

The 89-year-old leader faces his sternest test yet next week when he squares off in a presidential election rematch against longtime rival Morgan Tsvangirai.

Few doubt that Mugabe, a former liberation war hero, would be trounced in anything close to a free or fair election — he has presided over the collapse of a once promising economy and engineered the billion-percent bout of hyperinflation that killed the Zimbabwe dollar.

That’s where a company called Nikuv comes in. It is working with the Zimbabwe government’s Registrar General, which among other things maintains the country’s famously corrupt electoral roll.

The opposition Movement for Democratic Change party said it was “concerned about electoral fraud [by Nikuv] through manipulation of the voters’ roll, and the issuing of multiple national identity cards to individuals that would then allow them to vote twice.”

In past elections, turnout was suspiciously high in ZANU-PF’s rural strongholds. Widespread problems with the roll led to lower turnout in cities and towns, where the ruling party is wildly unpopular.

Nikuv, which is based in Hertzliya, Israel, has been operating in Zimbabwe since 1994, and has presided over the increasing corruption of the electoral roll.

Unlike many developing nations, Zimbabwe requires all voters’ names to appear on the roll. If a voter is not on the roll, he or she cannot vote — making it a powerful tool in the hands of the ruling party.

The respected and independent Research and Advocacy Unit asserted that more than 1 million Zimbabweans who are dead or have left the country are still on the voters’ roll. It also says the roll lists 116,000 people older than 100 — until recently, Ian Smith, the late leader of white-ruled Rhodesia, was still listed in his district in the farming town of Beatrice.

More disturbingly, the RAU report says 78 parliamentary out of 210 constituencies have more registered voters than adult residents, making them ripe for rigging. An estimated 2 million voters under the age of 30 are unregistered, even after a registration exercise that barely made a dent in the ranks of the unregistered.

Nikuv, for its part, denies any partisan funny business and blamed the reports on election-time politicking.

“It is election time and people are trying to throw mud from this side and the other side,” Ron Asher, the company’s representative in Zimbabwe, told the Mail & Guardian of South Africa. “We are legitimate and professional. We have never been involved in any politics, not now or ever.”

He said that Nikuv works with public sectors across the world, but declined to say which government bodies it works with in Zimbabwe.

The company’s website says that the company was established in 1994 by a group of professionals with an accumulated experience of 45 years in the field of population registration and electoral systems in Israel.

It’s not the first time the company’s operations have come under scrutiny in southern Africa.

Opposition figures in Zimbabwe’s northern neighbor Zambia cried foul in 1996 after the company won a $6.7 million contract to handle voter registration. They claimed Nikuv was brought in to rig the elections that would keep the then-ruling Movement for Multiparty Democracy party in power, but a lawsuit over the issue was dismissed on technical grounds.

Ironically, Israel has no diplomatic ties with Zimbabwe and Mugabe is one of the harshest critics of the Jewish state on the international stage.

Mugabe forged close ties with Israel’s arch-enemies Moammar Qaddafi of Libya and the Islamist government of Iran. That didn’t stop his government from reportedly buying Israeli-made water cannons/2) for its feared police force, which is often deployed to break up opposition protests.