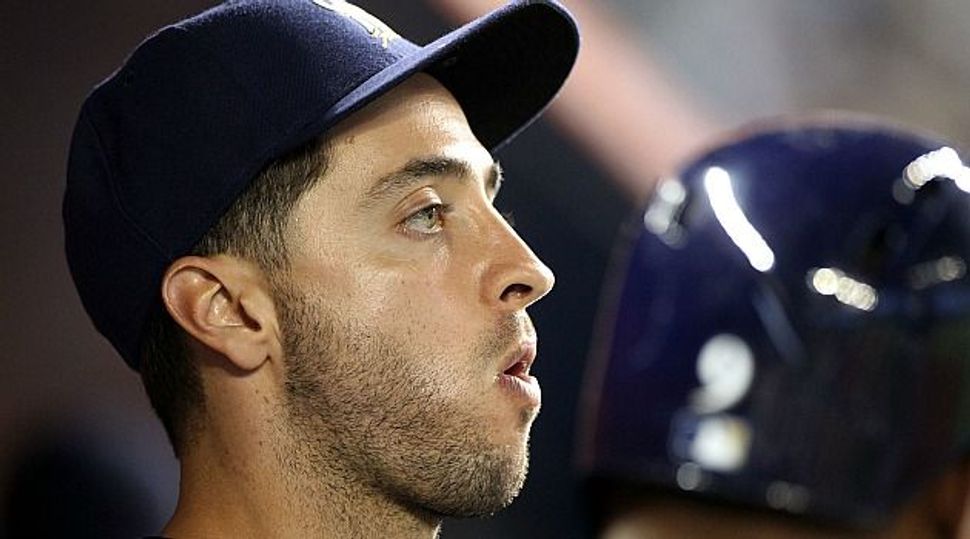 The best of times has turned into the worst of times for Jewish baseball fans now that Major League Baseball has suspended slugger Ryan “Hebrew Hammer” Braun in baseball’s latest performance-enhancing drugs scandal.

The Milwaukee Brewers slugger and former National League Most Valuable Player, who is the son of an Israeli-born Jewish father and a Catholic mother, has boasted of setting a good example for Jewish children.

“I do consider myself definitely Jewish,” he has been quoted as saying. “And I’m extremely proud to be a role model for young Jewish kids.”

After months of denying any involvement in the doping scandal, Braun now says he is accepting his suspension — a tacit admission that he broke baseball’s rules on performance-enhancing drugs.

“I realize now that I have made some mistakes,” Braun said in a statement. “I am willing to accept the consequences of those actions.”

With Braun’s acknowledgment of his links to Biogenesis, a Miami-based clinic (MLB did not specifically mention Biogenesis when it suspended Braun), those Jewish fans who defended Braun will have to change their tune. Some of his supporters once cited an arbitration panel that overturned his 2011 test because of the chain-of-custody issues in handling his urine sample, while others believed Braun’s high levels of testosterone were linked to medication they believe he took for herpes.

Nor do those who believe he was the target of a vendetta from a Commissioner’s Office angry that his earlier positive test was overturned have any leg to stand on. Braun may soon have company on the sidelines. Several other players have also been publicly linked to Biogenesis, including once-certain Hall of Famer Alex Rodriguez, and more suspensions are likely.

Others might still fear an anti-Semitic backlash from those who know about Braun’s Jewish background. But to spend time worrying about about a possible backlash is a misdirection of emotions.

We all cheered when Braun was on top of the baseball world. He is a poster boy, along with Shawn Green, Kevin Youkilis, and Ian Kinsler, of a Jewish baseball renaissance over the past decade or so. Indeed, it’s arguably been the greatest time for Jewish Major Leaguers since the period between the 1930s and the mid-1950s, when Hank Greenberg, Harry Danning, Al Rosen, and Sid Gordon starred on the diamond.

Several among the current crop of players either played for or coached the Israeli team that narrowly missed qualifying for this year’s World Baseball Classic. Braun earned the National League Most Valuable Player award in 2011, a season in which he whacked 33 home runs, had 111 runs batted in, and stole 33 bases. He had even gaudier statistics the following year, when he finished second in the MVP voting.

So for all these reasons and more, we should now direct our anger, as well as our pity, at Braun.

There’s also a larger point at issue here. We have been taught from childhood the inspirational stories of Hank Greenberg and Sandy Koufax refusing to play games to observe Yom Kippur. Braun’s strikeout teaches us that it’s time to go beyond idolizing Jewish baseball players, whether in the past or present, and to see them as human beings who made imperfect decisions for imperfect reasons.

Peter Ephross is the editor, with Martin Abramowitz, of “Jewish Major Leaguers in Their Own Words: Oral Histories of 23 Players” (McFarland).