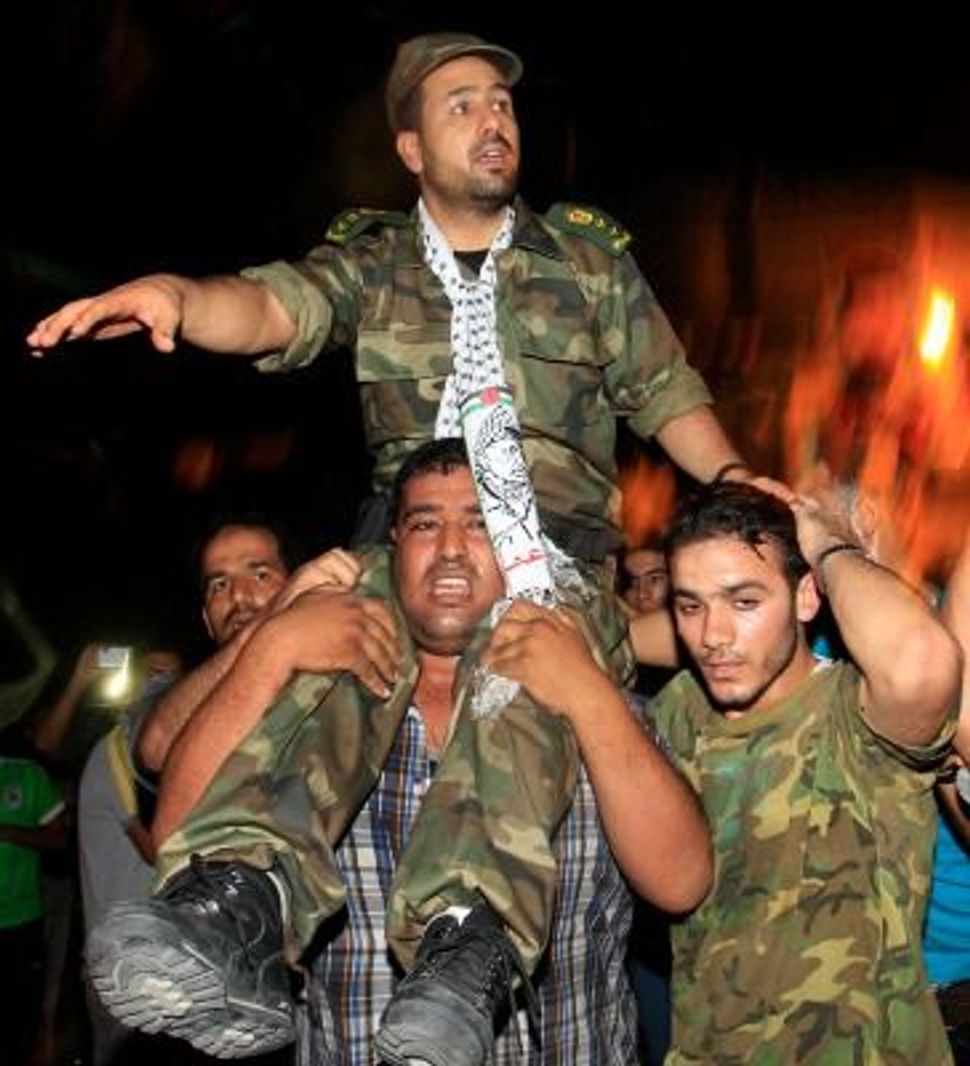 Secretary of State John Kerry had promised that the Israeli-Palestinian peace talks would be kept confidential, so that the negotiators could exchange ideas without being subject to pressure from extremists on each side until a package of mutual concessions was ready that could show each side what it received in return for what it gave away.

But as Round Two took place Wednesday night in a secret location somewhere in Jerusalem with no Americans present, following the late-night release, at 1:00 a.m. Wednesday morning, of the first 26 Palestinian prisoners, the process is so secretive that it’s set off its own wave of speculation about the low level of shared trust, good will and faith in the outcome.

Avi Issacharoff, the former Maariv military analyst who now writes for the online Walla! News, writes (in Hebrew) that any possible pride either side might take in what should be a hopeful event is overshadowed on both sides by the humiliation of what they’ve already had to give away — for Israel’s Netanyahu, releasing prisoners with blood on their hands in the face of widespread popular outrage, and for Palestinian leader Abbas, resuming negotiations without an Israeli settlement freeze and in fact amid a much ballyhooed wave of new construction plans. Issacharoff writes:

What began as a gesture toward Palestinian Authority chairman Abu Mazen, in advance of the renewal of negotiations, became as the release date approached a serious headache for the Israel government, which had agreed to release murderers. But instead of standing before the cameras and explaining the logic of releasing “senior” terrorists in order to strengthen Abu Mazen, the Israeli side preferred to hide the action from public awareness.

In fact, according to Alex Fishman, the veteran Yediot Ahronot military analyst, writing at Yediot’s Ynet website, Netanyahu turned the supposed goodwill gesture of a prisoner release into another opportunity to humiliate Abbas by picking a list of low-level thugs to release, and then sending half of them to Gaza instead of to the West Bank where Abbas could have arranged a festive reception to reap the credit.

Whoever signed the list of released does not really believe in the peace process. What we are seeing here is a political maneuver of horse dealers exchanging some construction in the territories for a few prisoners, winking at any possible coalition. It’s not a diplomatic move, with leadership, with a backbone, one that is worth a dramatic and painful decision to free murderers.

…For the first course the ministers selected “light murderers.” They do not include leaders who developed in prison, none of them committed any heroic activity which found its way into the Palestinian ethos, excluding perhaps the murderers of collaborators. Some are strictly criminal types, who had a nationalistic motive attached to them. Just scums of the earth who murdered elderly people among others. Even those of them who were involved in a “security-related incident” belong at best to the second league in the hierarchy of terror. It’s safe to assume that some of the young Palestinians, before running to the street to greet them, will run to Wikipedia to remember who they are.

This list does not express faith in Abbas or optimism over the success of the diplomatic move. Whoever signed this list did not think for a minute that this is what would serve as a tail wind for the leader on the Palestinian street.

Tel Aviv University political scientist Reuven Pedatzur, a Haaretz military analyst, complains that the fate of Israel and the region is dependent entirely on one person, Prime Minister Netanyahu.

What is Israel’s policy on the Palestinian issue? Nobody knows, because precisely in the age of crucial decisions, we have gotten into a situation where our future and that of our neighbors is in the hands of one man who shapes the policy, and nobody but he knows what his intentions are.

Pedatzur writes that Bibi is operating in a solitary isolation that’s unusual even for Israel, where prime ministers traditionally make major decisions on their own. All of the senior officials that he used to rely on for advice have left him, leaving him with a bureau of relatively inexperienced aides. His inner circle of senior ministers with long experience in diplomatic and military affairs, like Dan Meridor, Benny Begin and Ehud Barak, has been replaced by the likes of Yair Lapid and Naftali Bennett, who have none.

He seems to be the first prime minister who has no “kitchen cabinet.” Netanyahu, a suspicious man, does not give his kitchen to any of his colleagues at the cabinet table. His bureau no longer has advisers with whom he shares his intentions. He ascribes no importance to the Foreign Ministry, and he does not make use of the National Security Council to form policy. …

The members of the Winograd Commission, who probed the decision-making processes that led to the Second Lebanon War, analyzed very well the negative ramifications that could be the model Netanyahu is currently using. “Orderly decision making processes should provide the decision makers, and those who assess their conduct, with the means for structuring and considering discretion that will help limit the dangers of uncontrolled reliance on emotion, unfounded intuition, impulsive reaction, or personal and political considerations that may spoil what is underway.

“Decision-makers who act without an organized staff or structured decision-making processes increase the fear that decisions will be made on a flawed factual and professional basis and without full, due thought given to all the relevant considerations. Moreover, without a structured procedure, there is a natural tendency to reach the conclusion largely on the basis of a ‘gut feeling’ and intuition untested by orderly critique by others with a different array of knowledge, experience, culture or ideology.”