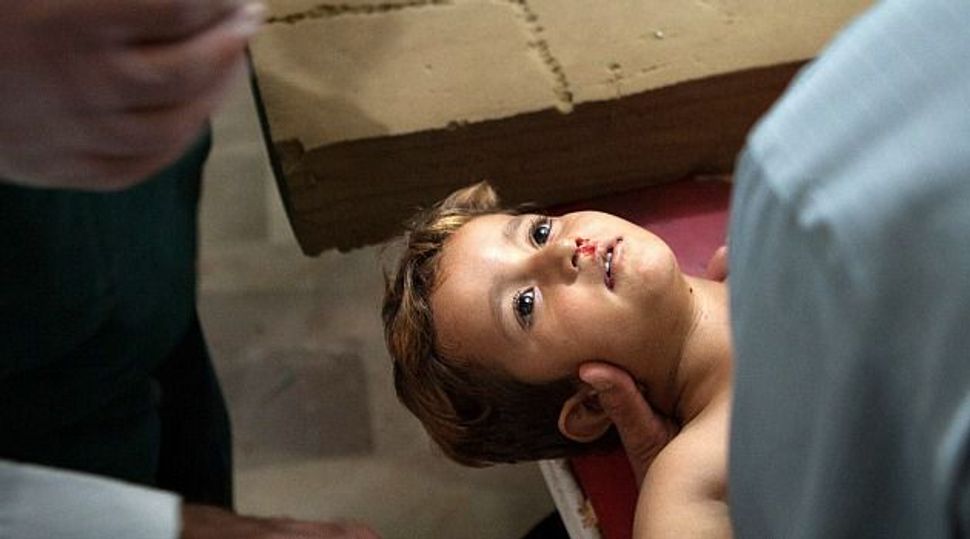 Not the Whole Truth: Israel touts stories like the one about it helping injured Syrians to show its human face. The stories are 100% true, but they end up obscuring the real truth about Israel?s role. Image by getty images

The Israeli government invests considerable effort in promoting its image in the foreign media. It’s called “hasbara,” which comes from the Hebrew root “to explain.” Israelis tend to be patriotic, with many believing their country is unfairly vilified in the foreign media. And so they embrace hasbara as a legitimate corrective measure. But for critics of Israel, even those who do not speak Hebrew, hasbara means official lies and spin designed to divert attention away from the military occupation of the West Bank and the settlers.

The Government Press Office, which provides journalists with press cards and keeps them informed of media events, contributes to the hasbara effort by sending out emails with carefully crafted pitches about human interest stories. Usually, these stories are meant to be both heartwarming and counter-intuitive — the kind that people post on Facebook with a comment about restoring one’s faith in human nature.

I helped report quite a few of these stories, mostly as a translator and news producer for foreign correspondents in Israel.

I remember one in particular from 2007, when Hamas was in the process of kicking Fatah out of Gaza. Armed Palestinian men engaged in gun battles on the streets of Gaza City, sometimes throwing one another off the roofs of tall buildings. Meanwhile, the Israeli border town of Sderot was frequently bombarded by Qassam rockets launched from Gaza, even as Israeli soldiers engaged in nocturnal shootouts with Palestinian militants along the security barrier. According to an email from the GPO, one hospital in Asheklon was simultaneously providing care for Sderot residents wounded by Qassam rockets, Israeli soldiers wounded by Palestinians, and Palestinians wounded in the ongoing Gaza gun battles.

A European journalist decided to cover that story and hired me to accompany him to Ashkelon as his translator.

At the hospital a middle-aged woman from Sderot, who spoke fractured Hebrew with a heavy Russian accent, recounted from her hospital bed that a rocket had pierced the roof of her house while she was standing in the kitchen. At the nurse’s station in the corridor, two soldiers inquired about a fellow combatant who had just been taken in for surgery. With their dusty assault rifles, red-rimmed eyes and stained green uniforms, they looked as though they had come straight from a night in the field.

In another room, a 21 year-old Palestinian man with eyes the color of kiwi fruit lay in bed, flat on his back. His father lifted the sheet, which was draped over a bulky frame that looked like an oversized shoebox, to show us his son’s legs. He pointed at the red bullet holes weeping puss and deep gashes that were held together by black stitches and metal screws and said his son would probably not walk again. In fluent Hebrew, which he said he had learned while working for an Israeli catering company in the 1980s and 1990s, the father said that his son was a police officer, newly graduated from the academy, who had been attacked by Hamas gunmen while protecting the home of a Fatah official.

A hospital administrator explained that men wounded in Gaza came to the hospital via Erez Checkpoint, following coordination between the Palestine Authority’s Ministry of Health in Ramallah and the Israeli army. She did not have the details of who paid for the medical care – this was information that the Ministry of Health could give us.

On the face of it, there was nothing wrong with this story. All the facts presented to us were true. But they were presented without important context.

For example, the wounded men from Gaza seemed to be selected as much for their political affiliation as the gravity of their wounds. The Palestine Authority, based in the de facto capital of Ramallah, was supposed to represent all Palestinians. But it seemed to be coordinating with the Israeli authorities for the evacuation of wounded men who were affiliated with Fatah institutions only. This was the case for the young man with the green eyes, who was with the P.A.’s police force.

In fact, Palestinians regularly receive treatment in Israeli hospitals. At the height of 2009’s Operation Cast Lead, when the Israeli army re-invaded Gaza, there were Palestinian children receiving treatment for cancer and other serious diseases at Tel Aviv hospitals. But the medical care is not offered for free; the P.A. pays for it, even as Israel regularly withholds its tax revenue and continues to confiscate private land owned by Palestinians for new and expanding Jewish settlements. One could also legitimately ask how it was that Palestinian hospitals, which are in territory under Israeli control, did not possess the equipment necessary to treat their own patients.

So the case of the wounded Palestinian man from Gaza in the Ashkelon hospital was not exactly a heartwarming tale of magnanimous Israelis offering free, lifesaving medical care to an enemy combatant. Rather, it was a politically expedient scenario that served the interests of both the Fatah-controlled Palestinian Authority and the Israeli governments. For the father and his wounded son, of course, these political considerations were irrelevant. They were grateful, as would be most people in their position. And most journalists presented the Ashkelon hospital tableaux vivant at face value. Asking questions about payment and political affiliation would have been perceived by readers as unnecessarily cynical, even if answers were forthcoming. Anyway, it was a human interest story and not an investigative report. And it was newsworthy.

But the experience left a bad taste in my mouth, as did similar stories that I helped cover. Especially when employees of the foreign ministry promoted the articles in global emails. It is not pleasant to feel manipulated.

When I read a recent New York Times article about wounded Syrian children receiving treatment in Israeli hospitals, I posted it to my Facebook with a cynical comment: “So the Government Press Office sends an email to journalists in Israel, telling them about this ‘quiet’ story of Israeli hospitals treating Syrian wounded. Shhh…. We want to be modest about this. So don’t make too much noise and please don’t reveal the identities of the people who benefit from our generosity, because their own people might shun or hurt them. Just for seeking help for their children. Can you imagine? And the media obediently report this story, because who can resist cute Jewish and Arab kids getting treated in the same hospital…. And then the foreign ministry sends links to the articles to all the journalists they have on their global email lists. And voila. That, ladies and gentlemen, is how you do hasbara.”

My friend Gal Beckerman read the comment and decided to look into the matter, emailing Isabel Kershner, who wrote the article, and the New York Times’s Jerusalem bureau chief, Jodi Rudoren. And it turns out that I was wrong. They discovered the story on their own, and in fact the army tried to prevent them from covering it.

Gal’s conclusion — and I agree with him — is that the Israeli government’s relentless focus on hasbara efforts has tainted the way we report and consume news from that country. For partisan observers, news reports are judged not for their veracity and newsworthiness, but for how they present Israel. Far too often this is parsed according to binary clichés: Israel is presented either as the evil occupier or a light unto the nations.

But I would take Gal’s observation one step further. By reporting the Israel-Palestine story with an emotional subtext rather than some intellectual detachment, we are perpetuating a discourse that is disconnected from reality. Hasbara diverts attention from the very painful and difficult issues that must be addressed. It is much easier to smile at Arab and Jewish children sharing a hospital ward than to address the tough issues, like a military occupation that does not seem likely to end in our lifetime.

Lisa Goldman worked for more than a decade as a freelance journalist in Israel. A contributing editor to +972 Magazine, she now lives in Brooklyn.