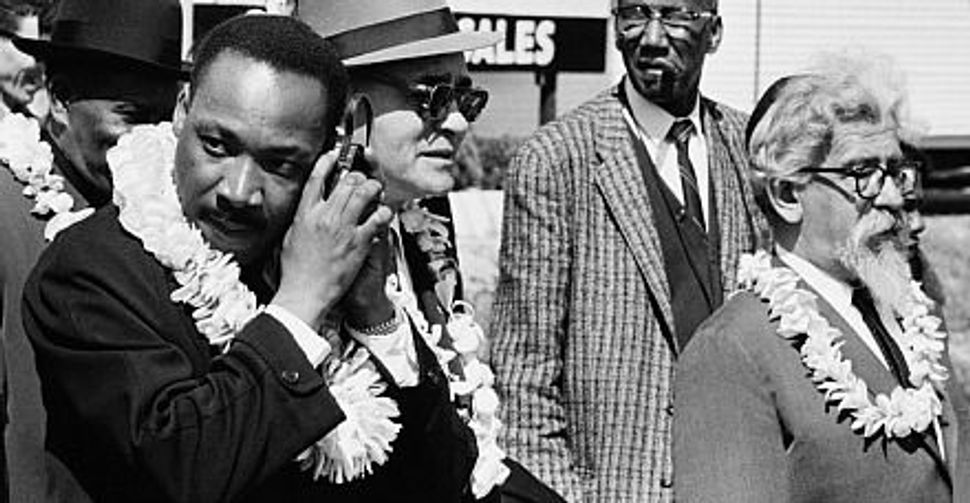 When the Forward decided to run a feature commemorating the 50th Anniversary of the March on Washington for Jobs and Freedom and the Jewish influence on the seminal civil rights event, the first name discussed was that of Abraham Joshua Heschel, a close friend of Martin Luther King.

Was he there? What role did he play?

Heschel passed away in 1972, after devoting much of his life to Jewish causes and the civil rights movement, but his daughter Susannah Heschel has carried on his legacy through her own work as a Jewish studies professor at Dartmouth.

When I called her earlier this summer to discuss memories of her father’s participation in the march, she was a bit at a loss — in her recollection, he was not invited to the March on Washington.

Susannah Heschel said her father met Dr. Martin Luther King, Jr., for the first time in the January of 1963 at the National Conference on Religion and Race in Chicago.

“I remember quite vividly when my father went to Chicago where he met (King) for the first time,” she said. “I was home with my mother and anxious to hear about it. In those days, making a long-distance phone call was expensive and not so easy so we waited for him to come back to talk about it. It felt momentous in my life. This was a great moment in our family.”

Later that November, Heschel helped bring Dr. King to the United Synagogue of America’s Golden Jubilee Convention at the Concord hotel in the Catskills. Two years later, when King and Heschel marched together in Selma, Susannah Heschel said she was frightened for her father.

“I felt terrified of my father going because we knew what had just happened when the march had just tried to take place weeks before,” she said. “My father’s health was always fragile. I didn’t know if he could withstand the march. If somebody tried to hit him, I think he would’ve just collapsed. But at same time, because the way my father talked about the civil rights movement, it felt to me like he was doing the most important thing a human being could be doing at that moment.”

Looking back, Susannah Heschel said her family always appreciated the friendship they developed with King and his kin. “My father knew a lot of people. A lot of people thought they were his close friends and disciples. I would say it was often clear to me that certain people really loved my father. I could tell right away when he died how people responded to his death and after, how they spoke to me and my mother. Mrs. King, especially Yolonda King, their whole family loved my father. It was genuine. It was a friendship in the closest way.”

While Heschel may not have been in Washington in person on this day 50 years ago, his influence on the civil rights movement is not forgotten, nor are the contributions of other Jewish groups and leaders, such as the Jewish Labor Committee, who spurred labor support for the march, and Seymour Posner, King’s public relations director, and countless other individuals.