Drifting Towards a Tribal Jewishness 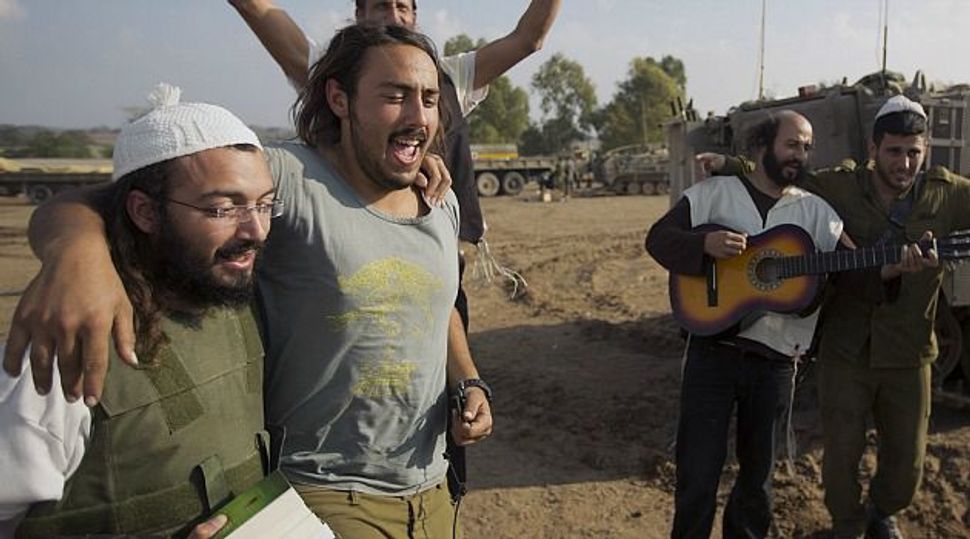 Looking Inward?: When faced with threats, Israel retreats to a kind of ?tribal? Jewishness, in an effort to defend itself against a perceived hostile world. Image by getty images

Last June, Jane Eisner participated in a private roundtable discussion at the Israeli Presidential Conference in Jerusalem about Israel’s Jewish identity. What came out of the talks was the sense that Jews in Israel and in the Diaspora face a similar challenge — how to be a modern people in a modern world while holding onto ancient tradition. These opinion pieces mark the continuation of that discussion.

Jews live their Jewishness in different ways in America and in Israel. In Israel, being a Jew is the default identity: It’s a national, political and ethnic belonging. Israeli Jews define themselves as Jews because Jewishness is the elemental frame of reference of their collective identity.

For all its advantages, this framing has a darker side. It is an assigned identity, one that is imposed, not chosen. And it is often affected by bureaucratic and political considerations.

Like other populations in the Middle East, Israelis are at risk of being ethnocentric and deaf to the post-nationalist zeitgeist that characterizes the Western liberal ethos. But as long as Israelis live in Israel, their Jewishness is transmitted to their offspring largely by default.

The opposite is true in the Diaspora, where being Jewish and engaged in Jewish life is a matter of parental or personal choice. Competing in a rich marketplace of identities, Jewish communities must offer positive, enriching content and an inviting environment if people are to opt in. Jewish belonging cannot be taken for granted and therefore Judaism must respond to global cultural and societal challenges in order to survive.

In general, questions of what it means to be Jewish are much more pressing in the Diaspora than in Israel. Those who face these questions must resolve the tensions between particularist Jewish concerns and universalist general concerns that highlight Judaism’s contribution to humanity.

Young Jews in America have difficulty accepting principles that erect ethnic barriers around the Jewish community, and resent being associated with a fenced-in Jewish identity. The affirmative commitment individuals must make to be Jewish is positive. But its darker side is that the market competition is intense and, in liberal Western societies, Jewish continuity is far from guaranteed.

Israelis are moving towards a “tribal” Jewishness that reflects, among other things, a tendency to withdraw, entrench and defend against a hostile world. However, young Israelis, or at least their leaders, have correctly assessed the problem: An Israeliness stripped of its Jewish identity is not robust enough to sustain the Zionist idea, and not deep enough to provide a real alternative to a Jewish culture evolved over thousands of years. Yet any attempt to reinforce the Jewish component of the Israeli Jewish community carries a high social price — tribal isolationism against the modern world, and friction among various population groups.

The two communities, it seems, face mirror-image challenges. The American Jewish community has yet to find a formula for carrying a universalist message without diluting the tribal genetic code that is the basis for tikkun olam. The Israeli community has located the tribal code — the capacity to continue transmitting Judaism’s universalist message — but it has done so in a way that makes Israelis more introverted and less inclined to pursue universalist goals.

These contrasting trends create a challenge. If nothing is done, these diverging perceptions of being Jewish may lead to a distancing between the two communities who together comprise more than 80% of world Jewry.

As a matter of policy, the response to this global Jewish people challenge is in the encounter between the two populations. American Jews can spur Israeli Jews to express the Bible’s universalistic message, while Israeli Jews can help anchor their Diaspora counterparts in Jewish particularity.

Every program that brings like-minded Israeli and Diaspora Jews together causes something positive and valuable to happen to both. The two communities are counter-weights, each giving balance to the other. Beyond the exposure to Israel that Birthright provides to young Diaspora Jews, we need to expand structured encounters so that they become a normative step on the ladder of Jewish engagement.

Jews become especially creative when survival is at stake. The continuing process of molding an Israel that is both a Jewish and democratic state is just such a challenge.

Dr. Dov Maimon is a senior fellow at the Jewish People Policy Institute in Jerusalem. He leads the think tank’s efforts to develop an “Israel-Diaspora new paradigm.”

Drifting Towards a Tribal Jewishness