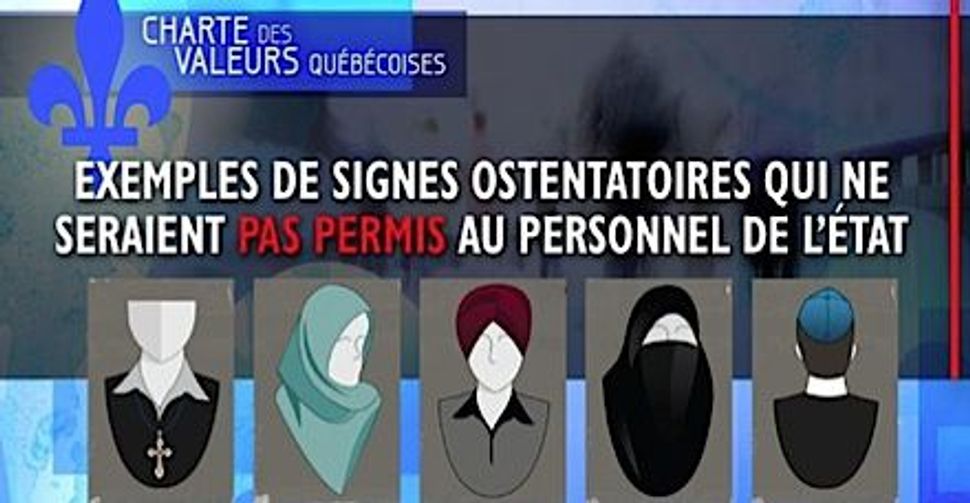 What Not To Wear: Quebec?s Charter of Values would forbid government employees including teachers from wearing any of the above.

In 1738, a young Catholic man named Jacques La Fargue came to New France. Jacques La Fargue turned out to be Esther Brandeau, a young Jewish woman who had disguised herself to come to the new world. When she refused to convert, she was sent back to France. Jews were officially allowed to settle in New France beginning in 1760, over 250 years ago. But Esther Brandeau’s were the first Jewish footsteps in what we today call Quebec.

I wonder what Esther Brandeau would make of the current controversy over the Parti Quebecois (PQ) government’s proposed Charter of Quebec Values. The ads in the Montreal metro proclaim, in two starkly-opposing posters: “Church. Synagogue. Mosque. These are sacred,” and, “Religious neutrality of the state. Equality of men and women. These are also sacred.” The self-proclaimed goals of the Charter are to set clear rules on religious accommodations; affirm Quebec values; and establish the religious neutrality of the state. The most controversial aspect of the proposal is the limitation of the wearing of “conspicuous religious symbols.” Namely, any employees of the state — which, in Quebec, includes not only public servants but teachers, professors, daycare workers, and doctors — cannot wear a hijab; a turban; a kippah; or a large crucifix. Small religious symbols are acceptable, though exact measurements are not provided. The crucifix in the Quebec National Assembly, along with the iconic cross on top of Mount Royal, are exempted as expressions of Quebec’s Catholic heritage.

It would be easy to look at this proposal and laugh; it would be equally easy to cry. But the reality is much more complex. The minority PQ government is trying to rally its base as it comes towards an election with a crumbling infrastructure and a weak economy. It is by no means certain that the government will garner enough votes to pass this legislation, and there is significant opposition among both French-speaking and English-speaking Quebecers. On a deeper level, those outside Quebec may not understand the existential concerns of a French-speaking majority who comprise less than two percent of the population of North America as a whole. Alone in an English-speaking continent, Quebec has a distinct language and culture. For that society to dissolve in the sea of internationalism would be a profound loss.

I returned to Quebec just last year to become the senior rabbi of Temple Emanu-El-Beth Sholom, after having been a student here at McGill, two decades before. Naively, I had focused on returning to Canada after many years in England and the United States, unaware of just how distinct Quebec society was. The moment that I began to understand these issues was at a gathering at a congregant’s house. Many of those in attendance were couples in which one partner was Jewish and anglophone, and the other was francophone and had not been born Jewish (some had converted to Judaism, while others had not). Most of these couples had made the same decisions about raising their children: the religion in their home would be Judaism, because without this conscious choice, they knew their family would be subsumed by the Christian majority. And the language in their home would be French, because otherwise that culture would also be subsumed. At that moment, I realized just how much our two communities share, as minorities with a stake in our own survival.

The difference is that in Quebec, those who speak French are the majority, not the minority, and the current government speaks with a separatist, nationalist voice, using its power to try to impose French by fiat. This legislation is only the latest, most galling manifestation of that approach. The tragedy of it is that it pushes minorities – everyone from the Jewish community, who has been here for hundreds of years, to more recent Muslim and Sikh immigrants — to feel like they have no place here, like Quebec can never be their home. Days away from Yom Kippur, the Charter — which feels so reactive — gives us the opportunity to reflect. My own conviction is that the stated values of Quebec and the values my religion teaches are not in conflict. As liberal Jews, we are committed to gender equality, and we count on the religious neutrality of the state. The dichotomy between our religion and our citizenship is a false one. At the same time, we stand in solidarity with those whose practices are more traditional. I may not agree with the gender differentiation implicit in the ideology behind a hijab, but I do not fear it. As long as someone else’s religious expression does not cause me harm, I welcome it as part of a diverse society, and it is to everyone’s benefit for our newest citizens to feel welcomed and included in the society that we share.

Finally, even as I have no sympathy for politically-motivated policies, and even less for xenophobia, I feel empathy for a minority trying to preserve a culture it holds dear. I only wish, after my first year back in Quebec, that the focus was more on the richness of that culture, and less on heavy-handed attempts to defend it. As Jews, we know that to survive is one thing; to thrive is another. We flourish not by coercion, but by making our way of life compelling.

Two hundred and seventy-five years ago, Esther Brandeau landed on these shores. She was sent back because there was no place for her in a homogeneous, Catholic Quebec. I would like to think that if she came now, she would be welcomed with open arms. Even if, like me, she wore a kippah.

Rabbi Lisa J. Grushcow, D.Phil., is the senior rabbi of Temple Emanu-El-Beth Sholom, the only Reform congregation in Montreal.