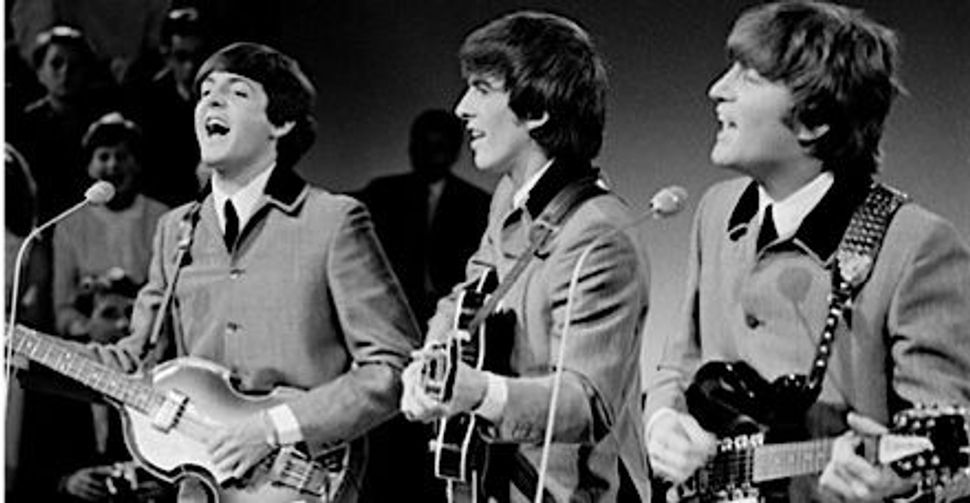 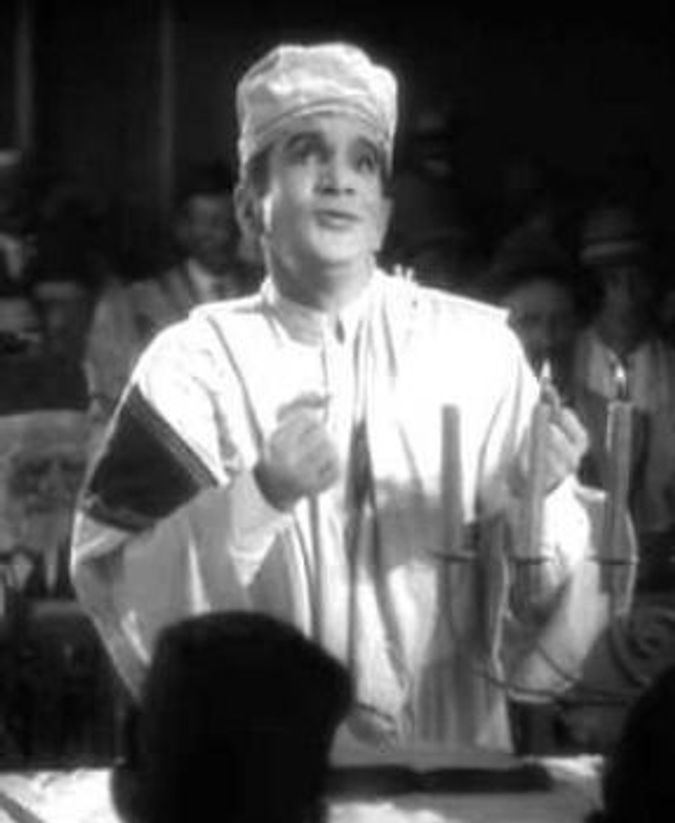 As we approach the holiest day of the year, I’ve put together a selection of songs that sum up the day and capture its spirit, at least for me. I’ve tried to follow the order of the day, from the introductory prayer to Kol Nidre, the Maariv service, some highlights of Mussaf, the Jonah story and finally Neilah and absolution. Some selections are traditional liturgy in particularly excellent musical rendering; others are American songs that capture the message and the flavor IMHO. Included are performances by Bob Dylan, Al Jolson, Barbra Streisand, Joe Cocker, Cass Elliott and Joni Mitchell, Cantor Yossele Rosenblatt, Leonard Cohen, The Beatles, Steve Lawrence and Eydie Gorme and Louis Armstrong, among many others.

Note: Steve and Eydie are a late addition, erev chag. I don’t know how I forgot them, as you’ll see when you hear their tune. They close the concert. Eydie closed hers just a month ago, on the 4th of Ellul, August 10.

We start as evening approaches and we prepare to stand before the Gates of Heaven. You know the drill: It’s getting too dark to see, and we’re Knocking on Heaven’s Door. This is a live version of the Bob Dylan song, from his 1976 Rolling Thunder Review concert tour, and he’s joined by Joan Baez and Roger McGuinn. By the way, the most emotionally devastating version of the song ever recorded might be this one; it’s sung by Warren Zevon on his final album, “The Wind,” reflections on his own upcoming death of cancer, which came just 10 years ago, on September 7, 2003, at age 56, a few days after the album was released.

Incidentally, Dylan originally wrote and performed “Knocking on Heaven’s Door” for the soundtrack (here’s the original) of the 1973 Sam Peckinpah film “Pat Garrett and Billy the Kid.” At the time Dylan was living in New York and meeting with kibbutz aliyah shaliach Shaul Pe’er, who was negotiating for Dylan and his family to spend a trial year at Kibbutz Kfar Blum. But in late 1972 Dylan told Shaul he was putting the talks on hold for several months while he went to Los Angeles to make the film. He never left LA.

Next are the two most powerful versions of Kol Nidre ever committed to film, in my opinion. The first is the iconic rendition by Al Jolson at the climax of the very first talking picture, “The Jazz Singer,” in 1927. It’s a tale that closely parallels Jolson’s own life of a cantor’s son who runs off to become a pop crooner and finally comes home on Yom Kippur to fill in on the bima for his dying father.

The second is sung by the great cantor Moishe Oysher in the 1939 Yiddish film “Overture to Glory” (“Der Vilner Shtot Khazn” or “Vilna City Cantor”). It’s a variation on the “Jazz Singer” theme with Oysher playing a young cantor who is lured from the synagogue to become an opera singer, learns his son has died, loses his voice, takes to the streets and finally stumbles back into shul for one last Kol Nidre before dying. Not to be missed.

After Kol Nidre we enter the evening Maariv service, which more or less begins with the Maariv Aravim prayer, Blessed is He who creates night and day and arranges the stars in the heavens. This is Bob Dylan’s approximate translation of the prayer, Father of Night, sung here by Manfred Mann’s Earth Band:

For you purists, the Hebrew prayer itself can be heard here sung by an anonymous but very talented folkie with acoustic guitar. And here’s a hoot: Dylan’s Father of Night in Sicilian.

A peak moment of solemnity on this most solemn of days comes at the opening of the Musaf service, as the cantor rises and begs to be allowed, unworthy though he is, to speak for the congregation in prayer. Hineni he-oni mi-ma’as — Here am I, devoid of accomplishment. And here he is, Yossele Rosenblatt, often considered the greatest cantor of modern times. Look who thinks he’s nothing.

And here is an approximate equivalent of the prayer in English, Lennon and McCartney’s With a Little Help From My Friends, performed live by Joe Cocker at the Woodstock Festival in 1969. (Here’s the original version by the Fab Four themselves, The Beatles, with Ringo Starr singing lead, backed by a composite video of nostalgic Beatles photos.)

But what if a shul doesn’t have a cantor? This is a clip from a Yiddish film about a congregation looking for a cantor for the High Holy Days. Here we present the cantorial equivalent of P.D.Q. Bach, Shepsel Kanarek (a.k.a. Yiddish standup comic Michla Rosenberg), a legend in his own mind, the former cantor of Poughkeepsie (with two choirs to accompany him, mind you!), as he is forced to endure the humiliation of auditioning for the High Holidays slot. It’s about half in English, and the rest you don’t really have to translate to get it. When he finally starts to sing, by the way, it’s Hu Malkeinu, Hu Moshienu (vehu yashmiyenu berachamov shenis le-eynei kol chai…) from the middle of the Kedushah, though it’s hard to tell through the hash he makes of it. Followed by a very brief, brilliant, wordless snippet of Menashe Skulnik.

Unetaneh Tokef, sung just before the Kedushah of Mussaf, the prayer that defines the day for many of us: On Rosh Hashanah it is written, and on the fast day of Atonement it is sealed, who shall live and who shall die, but repentance, prayer and righteousness — teshuva, tefila u-tzedaka — avert the harshness of the decree. Here’s an excellent Hasidishe version, sung by Mordechai Ben-David.

And here’s the piece you knew was coming: Leonard Cohen’s English rendering of Unetaneh Tokef, Who by Fire. That’s Sonny Rollins on sax.

Essential to the Yom Kippur cycle is the reading of the biblical Book of Jonah during Minchah in the late afternoon. Here are two versions of the story, first as stunningly related by Louis Armstrong; then perhaps the weirdest version of Jonah ever, the one originated by the eternal high priest of hip, the late Lord Buckley.

Jonah and the Whale (Lord, Wasn’t That a Fish?) by Louis Armstrong.

Jonah and the Whale, Lord Buckley’s hipster version, performed by Lord Buckley impersonator Rod Harrison. (If you’re curious, here is a clip of Lord Buckley himself in a 1949 television show, coincidentally doing his impersonation of (wait for it) Louis Armstrong.)

The final service of the day is Ne’ilah, the Closing of the Gate. In Sephardic traditions it is introduced by a piyut or sacred poem by Moshe ibn Ezra called El Nora Alila (“God of Awesome Deed, grant us forgiveness at this hour of Ne’ilah”). This is an incredible, up-tempo version by Israeli rocker Meir Banai, a scion of one of Israel’s best-known showbiz families. I blogged it when it came out in 2010; here are the Hebrew lyrics. Here is my blog with my translation, since I can’t find a more authoritative one.

And now the climax, my favorite moment in all of Jewish liturgy, Avinu Malkeinu, which we will not hear this year because it is not sung on Sabbath (a sacrifice that I have always found very annoying). Anyhow, here is Barbra Streisand doing her haunting, ethereal version, followed by the Vienna Jewish Choir doing a lovely version of the more familiar melody.

Here is the Vienna Jewish Choir doing Avinu Malkeinu as most of us probably remember it:

And what could be more appropriate way of summing up than with Bob Dylan’s vision of absolution in I Shall Be Released? Here he is performing the song in the 1978 Martin Scorsese film “The Last Waltz.” He’s joined by Van Morrison, Eric Clapton, Neil Young and The Band. (I almost went with this version sung by Cass Elliott, Mary Travers and Joni Mitchell, which approaches magnificence but has a truly hokey instrumental backup that sounds like the Mary Tyler Moore theme song. It’s redeemed by Cass’s first verse and especially Joni Mitchell’s third verse which is worth the price of admission. Even given the going rate for Yom Kippur tickets.)

We conclude, as the service itself does, on the hopeful note of “next year (in Jerusalem)” or as Ehud Manor framed it in his song, Be-shanah Ha-ba’ah, “Next year we’ll sit on the porch and count the birds wandering overhead while kids on vacation play Tag out between the house and the fields. You’ll see how good it will be next year.” We keep hoping, no matter how bad things seem right now. I’ll give these words of farewell to the durable duo Sidney Leibowitz and Eydie Gormezano, better known as Steve Lawrence and Eydie Gorme, he of Brooklyn, she of the Bronx, he Ashkenazi, she Sephardic, she passed from among us last month, August 10 (4 Ellul), 2013, he left behind to mourn a lifetime of partnership and lovely music. As he sings in this clips, people never seem to know how long it will rain or it will shiine. Let’s hope for a better one this time.