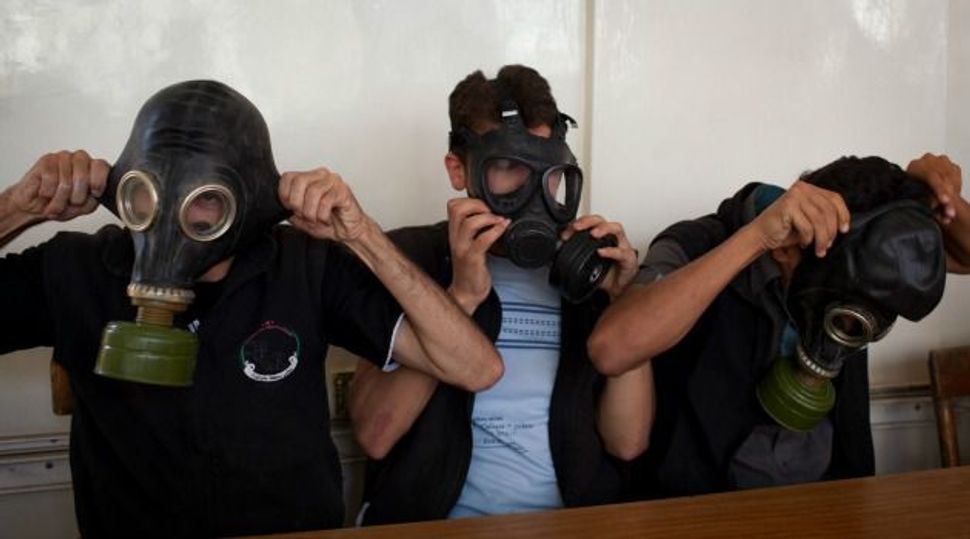 Deterrent?: Syrians are scrambling to find protection against chemical weapons attacks. The global outrage over the Assad regime?s use of the banned weapons underline why should rethink its policy on chemical and nuclear weapons. Image by getty images

The list includes North Korea, Syria, Angola — and Israel. Needless to say, a democracy like Israel would rather not be grouped together with a rogue’s gallery of outlaw states and authoritarian regimes.

Yet that is exactly where Israel finds itself alongside the handful of nations that have not ratified the Chemical Weapons Convention (CWC).

Syria’s outrageous use of chemical weapons against its own people and the global outrage that followed underline the need for Israel to ratify the international treaty banning chemical weapons. Israel should also should alter its policy on non-conventional weapons, both chemical and nuclear.

Videos from Syria’s August chemical attack against its own citizen’s paints a horrific picture. Reports show that chemical weapons killed over a 1,000 Syrians, leading to especially gruesome deaths and injuries. Many nations have been rightlyl disgusted at this barbaric act.

The growing international pressure has even resulted in a pact between U.S. and Syria’s ally, Russia, that would force Syria to give up its chemical weapons. With such intense focus on chemical weapons in the Middle East, it is logical that the international community shifts its attention to Israel, a nation bordering Syria that has also refused to ratify the chemical weapons convention.

Although Israel has refused to publicly acknowledge its chemical weapons program, the U.S. Office of Technology has identified Israel as a nation with likely offensive chemical weapons capabilities. A 1998 Sunday Times report claims that Israeli fighter pilots received training in how to load chemical and biological weapons onto airplanes.

Those who oppose Israel’s ratification of the CWC contend that Israel requires access to chemical weapons as deterrence to Israel’s hostile surroundings in the region. Israel’s Channel 10 quoted a reputable source within Israel’s security apparatus saying, “there is no significance to being part of an agreement like this while a neighboring country like Syria possesses a vast stockpile of chemical weapons.” These officials argue that because Syria and other rogue states may use chemical weapons in the future, Israel needs to preserve its own arsenal of chemical weapons.

Yet, defense officials claim in the Channel 10 report that they are confident that Israel would be able to follow the terms of the CWC without compromising national security.

In addition to the strategic elements, one has to question whether in any circumstance would Israel feel comfortable using chemical warfare. Israel possesses enough powerful conventional bombs that could inflict sufficient damage on enemy cities without the need to resort to the cruel chemical weapons. Could a nation that suffered so inhumanely from poisonous gas during the Holocaust really ever use them against her enemies?

Haaretz’s Barak Ravid compares Israel’s chemical weapons policy to its control over the Gaza Strip prior to the 2005 disengagement. Both were initially considered a strategic advantage prior to being more of a burden. By ratifying the CWC and joining the 183 countries that have already abided by the terms of this agreement, Israel would gain international legitimacy and save money from the expenses of needing to maintain this expensive project.

In addition to Israel’s controversial chemical weapons program, Israel is one of few nations not to ratify the nuclear non-proliferation agreement. The Los Angeles Times reported that Israel has 80 nuclear warheads with the capacity to over 115 more nuclear weapons.

While it may be legitimate for Israel to possess some nuclear capacity given the genuine regional threats Israel faces such as Iran’s nuclear program, why does Israel needs so many nuclear warheads? Its capacity would allow it to use nuclear weapons to bomb Cairo, Beirut, Damascus, Tehran, and Baghdad four times each — and have 60 nuclear weapons left over.

Furthermore, Israel’s policy of nuclear ambiguity — refusing to officially confirm or deny that Israel possesses nuclear weapons — is no longer necessary or strategically beneficial. It is a widely known secret that Israel has nuclear weapons since 1986 when scientist Mordechai Vanunu leaked to reporters details about Israel’s previously secret nuclear program.

In 2006, even former Prime Minister Ehud Olmert inadvertently appeared to confirm Israel’s nuclear weapons program exclaiming, “Iran publicly threatens to wipe Israel off the map. Can you say that this is the same level, when they are aspiring to have nuclear weapons, as America, France, Israel, Russia?”

Similar to a chemical weapons program, nuclear weapons are expensive to maintain, and the Japanese nuclear leak demonstrates that a nuclear program’s safety can never be completely guaranteed.

Israel’s policy on chemical and nuclear weapons is outdated in the 21st century. The attacks in Syria highlight Israel’s need to join the respectable members of the international community that no longer possess chemical weapons and have a more well-defined and modest nuclear policy. Simply put, Israel is far too progressive and law-abiding a nation to be grouped with North Korea and the Syrian regime.