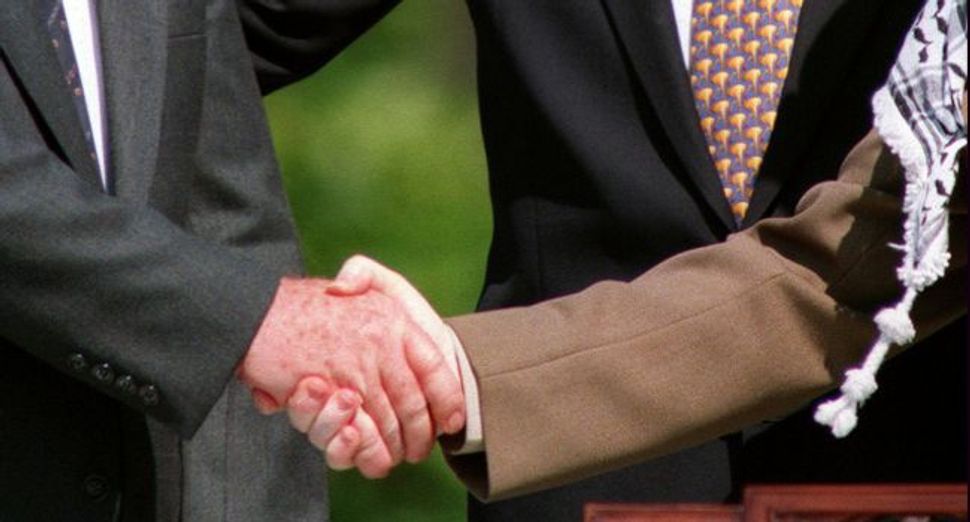 We’re all on anniversary overload lately: 40 years since the Yom Kippur War, 12 years since 9/11, five years since Lehman Brothers collapsed. But there’s another event that requires urgent attention: the Rabin-Arafat handshake on the White House lawn, September 13, 1993, the moment known in Middle East diplo-speak as Oslo.

It’s called Oslo because that’s where Israeli and Palestinian negotiators met to draft the agreement the leaders signed that day. Their intention was to end nearly a century of bloodshed and set the two peoples on a carefully timed path toward peaceful coexistence.

How is that working out? It’s hard to think of a watershed event in recent world history that draws such contradictory answers. It’s safe to say they’ve hit a few bumps along the road. There’s a widespread sense that the road is nearing an end. It’s not clear how far off the endpoint is, nor whether the road leads to a safe harbor — or a cliff.

Judging by recent commentary, most everyone on both sides seems to agree that the ride has been ruinous. Who got hurt? Israelis commonly say it’s benefited Palestinians but been a disaster for Israelis. Palestinians say the opposite. On one other point they concur: The process died around the year 2000, when the Camp David summit failed and the blood-soaked Al-Aqsa Intifada erupted. It’s now running on fumes.

And yet, surprisingly, the Oslo process — the system established in 1993 to govern Israeli-Palestinian relations — remains very much alive. The Palestinian Authority, created to provide limited, interim Palestinian self-government, still operates, running everything from education to garbage collection, telecommunications and business regulation.

It was supposed to last five years, leading to some sort of permanent arrangement. Palestinians expected two states side by side. Israelis weren’t sure. Each time negotiations got serious, two things occurred: The Palestinians balked and the Israeli government collapsed. The five-year interim structure is now 20 years old, with no end in sight. The State Department promises an agreement on two states within a year. Nobody else believes it.

Everyone says they hate the current arrangement. But nobody wants to let it go. A year ago, in September 2012, Palestinian leader Mahmoud Abbas, claiming Israel was flouting its obligations, threatened to cancel the accords and hand the keys back to Israel. Israel panicked and offered a few concessions. Two months later, Israel’s then-foreign minister Avigdor Lieberman threatened to cancel the accords and take over, claiming the Palestinians were breaking their commitments. Now the Palestinian side panicked. So what’s so awful? To Israeli critics, the problem is obvious: Oslo allowed the Palestinians to run wild. Political scientist Efraim Inbar, director of the respected Begin-Sadat Center for Strategic Studies at Bar-Ilan University, summed up the failure in a September 10 essay: An incompetent Palestinian Authority running what “borders on a failed state” in the West Bank. Gaza controlled by Hamas, “an Islamist organization dedicated to destroy the Jewish state” and intently waging “armed struggle against Israel.” Worst of all, more than 1,500 Israeli deaths since 1993 from Palestinian terrorist and rocket attacks.

It’s a powerful indictment. Hamas control of Gaza means that any statehood pact with the Palestinian Authority would leave nearly half the population untouched and ungovernable. The only way around it would be to bring Hamas into the diplomatic process, and nobody favors that except naïve European leftists (plus a string of former heads of Israeli intelligence — ex-Mossad chief Efraim Halevy explained why in a fascinating March 6 article in The New Republic).

As for Inbar’s “failed state” in the West Bank, that’s murkier. A 2011 report by the Ad Hoc Liaison Committee, an oversight body comprising Israel, the Palestinians, America, the Quartet partners and a dozen donor countries, concluded the Palestinians are quite ready for statehood. The World Bank told the committee that “Palestine” had “achieved more than many states that are full U.N. members.” Even Inbar, after saying things were a mess, went on to claim they aren’t so bad, as “[a]nyone visiting Ramallah, with its cafes and shopping centers, can see it for himself.”

The most devastating indictment of Oslo is the death toll from terrorism. It’s also where emotions and facts collide most dramatically. It’s conventional wisdom that letting Arafat’s PLO into the territories unleashed bloodshed that’s plagued Israelis ever since. The facts say otherwise.

Israeli Foreign Ministry figures show Palestinian terrorism rising and falling in waves since 1967. The first eight years of occupation saw a wave of horrific attacks. Israeli deaths averaged 47 per year. Killing slowed in 1976, the rose again to 52 per year during the First Intifada, 1989 to 1992.

Oslo incited a wave of mass murders by Hamas aimed at derailing the process. Israeli deaths rose to 65 per year. A 1998 crackdown lowered the toll to 12.

Arafat’s Second Intifada brought a five-year slaughter, 213 Israelis per year. Then came Arafat’s death, the rise of Abbas and U.S. training of Palestinian forces. Since 2009, Israeli deaths have averaged 11 per year, the lowest since the 1960s.

Did Oslo create terrorism? No, that began long before. Oslo promised a way to end it. For a while it got much worse. Then it got much better. What’s next isn’t clear.

But what of Palestinian complaints? The main one is that settlement growth is taking land where their state might be. Since 1993 settlers have tripled to 342,000, fully 13% of the total West Bank population of 2.7 million. Settlements, it’s claimed, are creating a seamless Israeli state from river to sea where Palestinians alone are non-citizens. They call it apartheid.

But apartheid means a minority ruling a majority. Israel’s population — all its citizens — now total 8.08 million. Palestinians in the West Bank and Gaza number just 4.43 million, according to CIA figures. Eventually they’ll have their own state. There’s time. But is there? Israelis increasingly reject the idea that they’re a “state of all its citizens.” The Knesset is considering several bills to define the country in law as the state of the Jewish people, and secondarily as a democracy of all its citizens. Israeli Jews, in Israel and the West Bank, number 6.07 million as of Rosh Hashanah 2013. Palestinian Arabs under its rule — in the West Bank, Gaza and Israel — number 6.1 million.

If the endpoint is supposed to be a democratic Jewish state, time’s up.