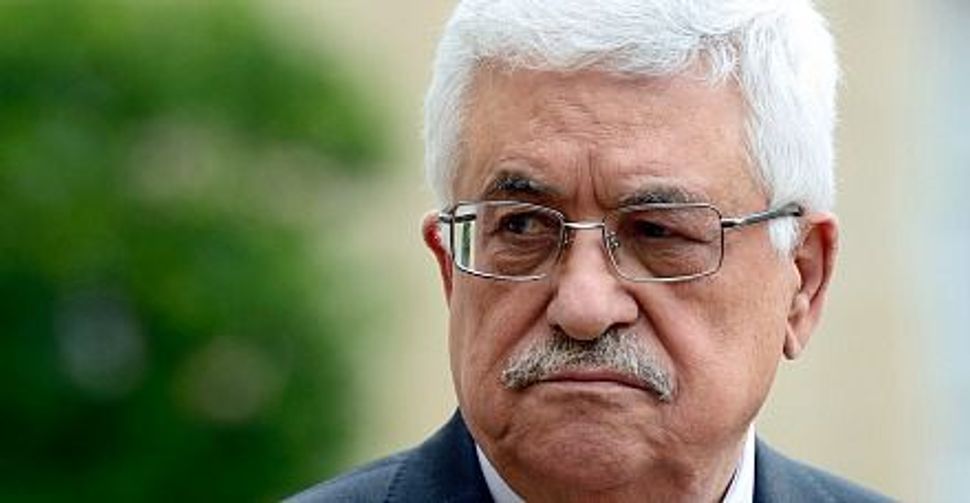 Mahmoud Abbas, the president of the Palestinian Authority who is known as Abu Mazen, met Sept. 23 with American Jewish leaders, at a dinner hosted by the S. Daniel Abraham Center for Middle East Peace. There were plenty of former ambassadors, members of Congress, diplomats and dignitaries — former Secretary of State Madeleine Albright identified herself as “also a former person” — and even some currently in office. Martin Indyk, the U.S. Special Envoy for the Israeli-Palestinian negotiations, for instance. Not to forget Wolf Blitzer.

It was a friendly crowd. All but we journalists (who stayed decidedly neutral) went to great lengths to express admiration for Abbas’s attempts at negotiations and support for a two-state solution. Again and again, it was noted that a strong majority of Israelis and Palestinians favor this outcome.

But Abbas has a more difficult task of persuasion within his own family. One of his sons, it turns out, is not a believer.

Abbas mentioned the intra-family disagreement in passing in answer to one question, but I was intrigued, so I pressed him on it. We Jews worry that a “one-state solution” will mean the end of Israel. What do you say to him as a Palestinian, I asked. As a father, how do you make the Palestinian case against the argument that only one state is possible?

Here’s the gist of Abbas’s response, which only partially answered my question: His son doesn’t believe that a two-state solution is possible because the Israelis won’t freeze settlement construction and instead continue to usurp Palestinian land. “We don’t have land to build our state on it,” was Abbas’s clumsy English version of his son’s complaint.

But, Abbas conceded, his son is not convinced. “Because he’s seeing every day that they are building everywhere. Really. It’s awful. For what? To convince me that you’ll keep it?”

Like many of the more probing questions posed to Abbas, he skirted around an answer. But at least he is being forced to understand something profound and disturbing: Unless Israelis and Palestinians figure this out, the pressure to abandon the quest for two states for two peoples will only grow. Right now, you hear that sort of talk mostly from the extremes (and, occasionally, a Penn professor who writes for the New York Times) but, particularly among Palestinian intellectuals, skepticism is increasing.

And it’s hitting close to home.