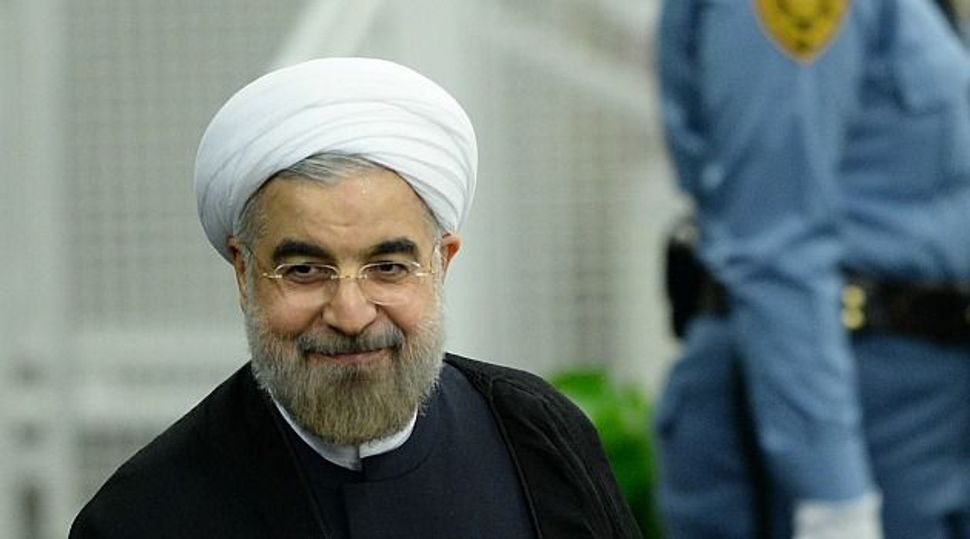 Where?s Our Charm? Iranian President Hassan Rouhani continues to present a moderate face to the world. Why is Benjamin Netanyahu playing nasty? Image by getty images

As the world’s leaders converge in New York for the United Nations General Assembly, Israeli Prime Minister Benjamin Netanyahu is encountering an unusual confluence of activities and initiatives concerning nonconventional weaponry in the Middle East. Some of this activity appears to be working to Israel’s benefit, some of it against Israel. Netanyahu is working overtime to emphasize the negative, in ways that could prove counterproductive for Israel.

The Middle East backdrop to this year’s G.A. is ostensibly encouraging. The United States and Russia are backing a program to eliminate Syria’s chemical weapons — a strategic threat to Israel. Iran has elected a president, Hassan Rowhani, who, with the backing of Supreme Leader Ali Khamenei, is pushing a program of dialogue and compromise. Rowhani and his foreign minister and chief nuclear negotiator, Mohammad Javad Zarif, have been bombarding the media with moderate statements regarding their policies and intentions, from traditional disclaimers of any military nuclear intentions to eye-openers like Rosh Hashanah greetings.

Rowhani and the usually extremist Khamenei have even bluntly told the powerful Revolutionary Guards, who are responsible for a lot of Iran’s terrorist evildoing and support for genocide in Syria, to stay out of politics.

(Between Khamenei and the Revolutionary Guards, Rowhani is almost certain to have the ground cut out from under him sooner rather than later. But that’s a different story.)

So why is Netanyahu frantic? He calls Rowhani a “wolf in sheep’s clothing” and his representatives advise “not to be fooled by the Iranian president’s fraudulent statements.” Even the Rosh Hashanah greetings produced growls of hostility from Jerusalem.

This appears to be a case of reading the strategic situation correctly but completely muffing the tactics.

Netanyahu believes, correctly, that Iran is developing a nuclear weapons capability, despite its denials. He has accurately analyzed the recent drama in Syria: Without a credible American threat of massive military force, the agreement on chemical weapons disarmament would not have been reached. And he, like many of Israel’s Arab neighbors who are worried about both Syria and Iran, views the Syria drama as a graphic illustration of America’s withdrawal from military involvement in the Middle East, one that weakens America’s deterrent against Iran and thereby places a greater burden on Israel.

Moreover, almost inevitably, the mere hint of progress toward nonconventional disarmament in Syria and Iran has put the spotlight on Israel’s nuclear potential. Russian President Vladimir Putin has equated it with Syria’s chemical weapons and opined that Israel will have to go the same disarmament route as Damascus. The Arab states just led an almost successful attempt at the International Atomic Energy Agency to call on Israel to join the nuclear nonproliferation treaty.

Netanyahu, understandably, probably feels that he is almost alone on the international scene in warning of the need to be tough on Iran. And he feels that he’s fighting an uphill battle to hold President Obama to his commitments regarding the ultimate use of force against a nuclear Iran. When he meets Obama on his upcoming trip to the White House, he wants Congress and American public opinion behind his tough stance.

Last year, at the United Nations, Netanyahu drew a red line on a sketch of a bomb. It was a memorable gimmick, but one of doubtful validity: Iran has carefully avoided reaching Netanyahu’s red line of enrichment, yet the country has contrived to advance toward military nuclear capability by other means. Now Netanyahu is presenting a more complete list of demands: a halt to uranium enrichment, removal of enriched uranium from the country, dismantling of the secret Fordow nuclear plant and elimination of a new plutonium track that produces an alternative nuclear explosive to uranium.

Even the conservative IAEA essentially backs up the Israeli case. It accuses Iran of enriching uranium far in excess of its needs for a peaceful nuclear program; of achieving a “break out” ability of a few weeks to obtain weapons-grade uranium; of advancing toward obtaining plutonium, and of working on nuclear weapons designs. Few Israeli or American intelligence officials doubt where Iran is heading.

Netanyahu presumably knows that in a best-case scenario of successful negotiations between Iran and the United States, only a portion of the measures he proposes will be achieved. Another thing he presumably knows is that in return, crippling international sanctions against Iran will be relaxed — yet another reason, he apparently believes, to be tough and unyielding in his approach.

Tough and unyielding, yes. But why the scowl? Why shouldn’t Netanyahu offer, for example, to meet with Rowhani at the United Nations? “You seek a meeting with the Big Satan; how about the Little Satan?” (Rowhani will refuse, but he’ll be put on the defensive.) As the leader of the Jewish people, shouldn’t Netanyahu simply thank Rowhani for his Rosh Hashanah greetings?

Besides taking a “trust but verify” attitude toward Rowhani’s openness, Netanyahu could use the G.A. podium to reiterate Yitzhak Shamir’s very logical condition from 1991 regarding nuclear disarmament: When Israel has peace with all its neighbors, without exception and including Iran, we’ll discuss it seriously. And he could show some flexibility while in New York regarding the Palestinian issue, on which Israel has locked itself into ever-growing international isolation.

Otherwise, Netanyahu’s fears of yet more isolation as a consequence of events in Syria and of the Iranian “smile offensive” will become a self-fulfilling prophecy.

Yossi Alpher is the former director of the Jaffee Center for Strategic Studies at Tel Aviv University.