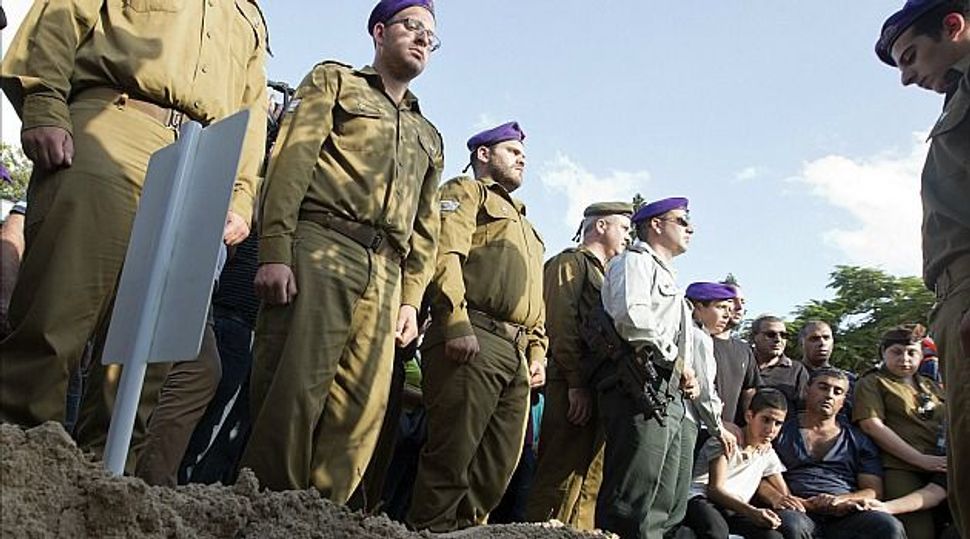 Grim Ritual: Stony-faced soldiers mourn an Israeli comrade shot dead in Hebron. Despite the angst, Israelis must understand the facts show violence is way down. Image by getty images

He was a diminutive man, though solidly built. I saw him standing near the bar, nursing a mineral water while the gaggle of Americans and Palestinians, politicians, Jewish peace activists, journalists and rabbis mingled and gossiped, waiting for dinner and Mahmoud Abbas’s remarks. I wouldn’t have pegged him as security if not for his green enamel lapel pin. On this Monday at the Plaza Hotel, I deduced, green enamel meant Palestinian.

“Palestinian security?” I asked. “Yes,” he replied, grinning, chin thrust forward, adding a good inch and a half to his height.

“Are you with the president’s guard?” I asked.

“I’m curious,” I said. “Can you tell me anything about the killings of the Israeli soldiers over the weekend?”

“It’s very bad,” he said, turning serious. “We are very concerned for Israeli security. Without security for Israelis there can’t be a peace process. This is very important to us.”

“I don’t hear much optimism about peace these days,” I said.

“I am optimistic,” he said. “I believe President Abbas is optimistic. People want peace. Palestinians want our own state. Of course, if there is no progress, the people will look to Hamas. Then there will be no state, no security, no peace. We must be optimistic.” But his eyes showed fear.

The murders of the two soldiers, Tomer Hazan and Gal Kobi, both 20, help illustrate his point in a ghoulish sort of way. Kobi had been shot by a sniper the day before, September 22, while standing guard in Hebron, south of Jerusalem. Hazan was murdered September 20 by a Palestinian acquaintance who dumped his body in a well near Qalqilya, 50 miles further north. Both funerals drew thousands of angry mourners.

“Twenty years after Oslo, the Palestinians have yet to abandon the path of terror,” Deputy Defense Minister (and freshly-minted New York Times contributor) Danny Danon said in a radio interview.

From Gaza, Hamas deputy chief Moussa Abu Marzouk channeled Danon, writing on his Facebook page that Palestinians in the West Bank planned more killings and were “on the verge of a third intifada.”

It seemed awkward, yet necessary, to point out that the soldiers were only the second and third Israeli deaths from terrorism in all of 2013. “These were two tragic events that occurred in the same time period, but we do not see them as part of a new trend,” Israel’s military chief of staff, Benny Gantz, told a Sukkot holiday gathering.

“Every death is an entire world,” center-right columnist Ben-Dror Yemini wrote in the daily Maariv, paraphrasing a rabbinic maxim. “But has the intifada resumed? Not exactly. The number of casualties from acts of violence, Israelis and Palestinians, shows a substantial decrease in recent years.”

He continued: “With all the sorrow over the last two events, they are still isolated cases. We should pay attention to the global battle against Islamist terrorism, of which Israel is a part.”

Yemini went on to catalog the grisly toll from terrorist attacks around the world in the preceding week alone: Nigeria, 140 civilians murdered in the mostly Christian north by the Al Qaeda-linked Boko Haram. Pakistan, 85 Christians slaughtered when a church was bombed by a Taliban offshoot. Kenya, 72 shoppers murdered in an assault on a shopping mall, apparently by Somali terrorists from the Al Qaeda-linked Al Shabab.

Where does Israel fit in all this? In a way, it’s an island of tranquility amid a region in meltdown. This doesn’t quite fit the narrative of a nation beset by unrelenting terror. Facts can be awkward things.

The three deaths from West Bank terrorism in 2013 follow a year, 2012, in which nine Israelis were killed, all in attacks originating from Gaza or Sinai, none from the West Bank.

Those numbers need qualification. While there were no fatal attacks on the West Bank in 2012, the Israel Defense Forces website shows numerous non-fatal attacks: 15 shootings, 642 firebombings and 4,731 rock-throwing incidents. Many more attacks were thwarted.

But these numbers are a fraction of what Israel suffered during serious terror waves, including the First Intifada from 1988 to 1993 and the blood-soaked Second Intifada from 2000 to 2005. The reason, as Israeli security officials repeatedly tell a disbelieving Knesset, is some seven years of successful Israeli-Palestinian security cooperation.

This fact is uncomfortable for the Israeli right, which works hard to keep the memory of the terror years fresh. If Palestinians are shown to be a band of irredeemable terrorists, then Israel can’t grant them independence — and thus must keep control of the biblical heartland in Judea and Samaria.

What’s the difference who’s responsible? According to current Shin Bet director Yoram Cohen, addressing Israeli diplomats in Jerusalem last January, Abbas is very much in command of his security apparatus. His goal is a peace agreement with Israel. But he needs to show progress, so his security efforts don’t brand him as a collaborator. Warnings have been sounded for years that if Palestinian statehood isn’t on the horizon, cooperation will break down. And then all hell will break loose.

But Netanyahu does the opposite. Settlements keep growing, squeezing the land available for a Palestinian state. Last November, in retaliation for Abbas’s U.N. statehood bid, he froze the transfer of tax revenues that Israel collects for the Palestinians. Salaries weren’t paid. Abbas’s security forces couldn’t pay their grocery bills. Following the latest killings, Bibi ordered the opening of a hotly disputed Hebron building to settler occupancy.

Abbas feels the heat, as he made clear that Monday at the Plaza. “Some people have lost their hope of a two-state solution because they see settlements everywhere,” he said. “They criticize me for negotiating with the Israelis. But I gave my word.”

“I am not doing Israel a favor,” Abbas said. “I am doing it for my own people. If I did not have hope, you would not see me here.”