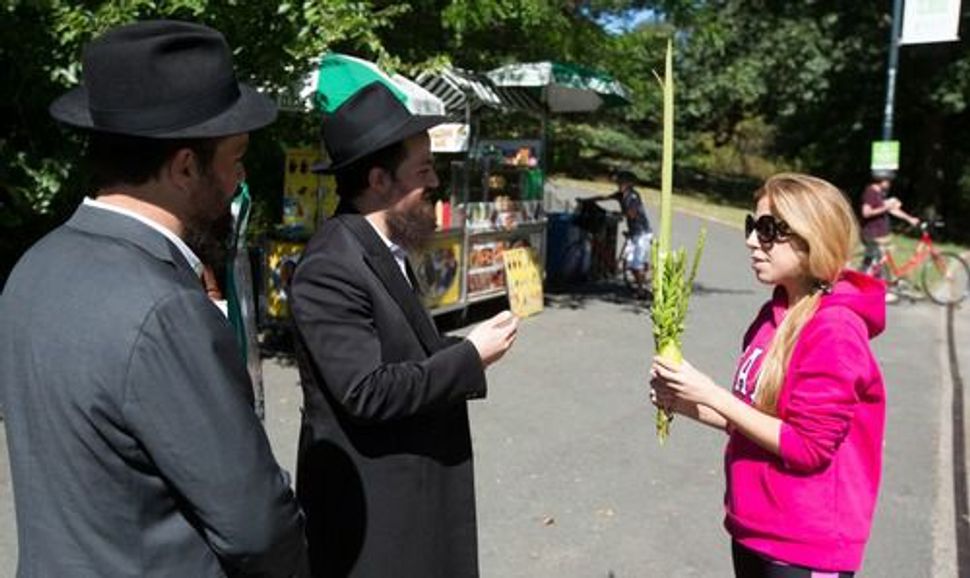 Levi and Yisroel Pekar have asked thousands of people, “Are you Jewish?” in their years of conducting street outreach for the Chabad movement during Sukkot.

Since the twins mainly operate in New York City, it should come as no surprise that they have shaken the lulav with some famous Jews over the years. Like Natalie Portman and Jon Stewart (or so the Pekars claim).

Levi Pekar’s brush with Natalie Portman dates back to 2009, or so he estimates.

“I was walking on Broadway,” said Levi Pekar. “This woman stopped. She was averagely dressed, nothing special.”

Levi Pekar asked her if she’d like to shake the lulav: “She thought about it and said yes.”

“When she was walking away, a guy I was with, his mouth was agape,” continued Levi. “He said, ‘That was Natalie Portman! The famous Jewish Israeli actress.’”

A year later, Yisroel supposedly encountered Jon Stewart in Midtown at Chabad’s “mitzvah truck,” which is billed as the largest mobile sukkah in the world. Stewart walked into the sukkah, Levi recounted, and his brother administered the blessing.

When Yisroel said he recognized Stewart from somewhere, Stewart looked uncomfortable and quickly left, Levi said. A Daily Show fan who happened to be in the truck as well told the brothers whom they had just encountered.

These celebrity run-ins didn’t make much of a difference to the brothers, Levi said. “I don’t care what a person’s financial statement or PR statement is. It’s about sharing the mitzvot.”