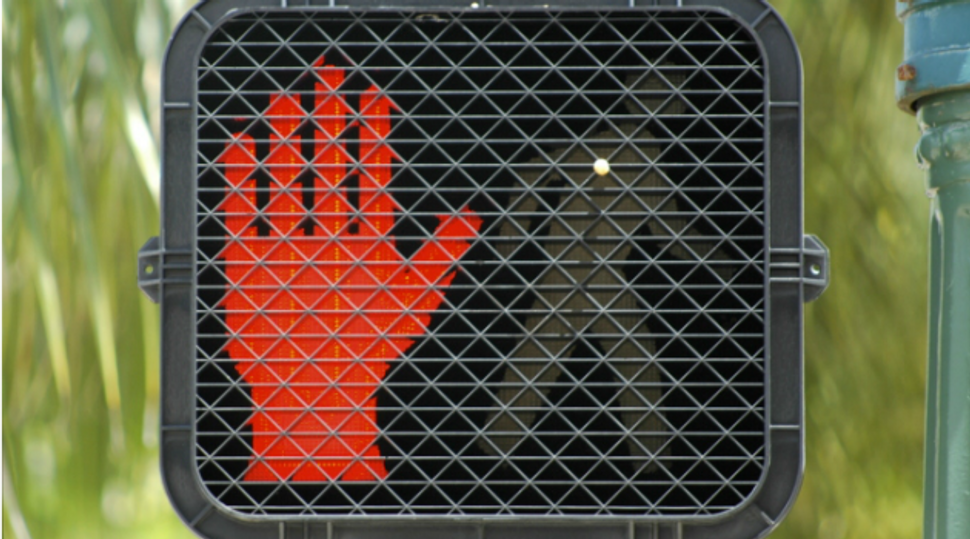 Don?t Walk: Esther Ohayon and her daughter were crossing an eight-lane Florida road on their way to synagogue on Yom Kippur when they were struck by a car. Should observant Jews be permitted to ask someone to push a ?walk? button for them? Image by Thinkstock

The recent incident this past Yom Kippur involving a woman in Jacksonville, Florida who was killed while crossing an intersection with dangerously fast cars was very tragic indeed. It not only left the sixteen year old daughter who was with her with life-threatening injuries, it left her orphaned r”l. This young lady had lost her father many years earlier.

The tragedy, however, brings up a halachic question. In an area where the traffic light poses a danger in crossing because it is timed for too short a time to cross safely, would it be permitted to ask a gentile to press the button?

THE PROHIBITION AND ITS REASONS

Generally speaking, the sages forbade asking a gentile to perform an otherwise- prohibited action on the Sabbath or on a Jewish holiday. The prohibition is called “Amira l’Akum” and is found in Shabbos 121a, where we learn that it is forbidden to ask a gentile to extinguish a (non-life-threatening) fire.

EXCEPTIONS TO THE PROHIBITION

The rationale is that under these four circumstances — the Rabbis never made the restriction of forbidding one to ask a gentile to perform an action that will remedy the situation.

AVOIDING DANGER IS A MITZVAH

It is this author’s view that when faced with a dangerous intersection, ensuring that one crosses safely is a Mitzvah. The Torah tells us (Dvarim 4:15), “And you shall be very careful with your souls” and earlier (Dvarim 4:9), “Just be careful and watch yourself very much.” The Rambam (Hilchos Shmiras HaNefesh 11:4) rules that these verses teach of the Mitzvah to remove dangers. Rav Chaim Kanievsky Shlita (in his responsa 24-30 as cited in Nesivos Chaim p.17) rules that, in fact, one fulfills two Mitzvos by abiding by these Psukim.

The Rambam (Hilchos Shabbos 6:9-10), Mishna Brurah (307:23) and Aruch HaShulchan (OC 276:16) clearly state that for the needs of a Mitzvah, one may ask a gentile to violate a rabbinic stricture. Other modern Poskim (Dayan Weiss Minchas Yitzchak Vol. VIII #57) rule this way too, and a minority of Poskim even permit asking the gentile even to perform a full-fledged biblical prohibition when it is a Tzorech Mitzvah (See Mogain Avrohom 276:2).

The Manual on Uniform Traffic Control Devices (MUTCD) is a document issued by the United States Department of Transportation (USDOT) to specify the standards by which traffic signs, road surface markings, and signals are designed, installed, and used. In the United States, all traffic control devices must conform to these standards. The manual is used by all state and local agencies as well as private construction firms to ensure that the traffic control devices they use conform to the national standard. Traffic light bulbs are incandescent bulbs and most traffic departments across the country have not yet made the switch to florescent or to LED displays.

Most Poskim rule that florescent or LED displays are a Rabbinic violation, but turning on or off an incandescent bulb is, generally, a Torah prohibition according to virtually all Poskim. A good argument can be made, however, that asking a gentile to press the pedestrian button is, in fact, permitted.

WHY ONE MAY PERMIT ASKING A GENTILE

Why might this be the case? The pressing of the button in most of the older systems that still fit the MUTCD does not happen instantly. Indeed, at certain times, depending upon traffic and timing, pressing the button does not cause a change at all according to the MUTCD guidelines. Certainly, however, there is a delay of the changing of lengthening of the crosswalk timing as well as in turning the light to oncoming traffic red sooner. This delay would very likely be viewed by some Poskim as a gram hadlaka (See Shmiras Shabbos K’hilchasa Vol I 12:25 citing the view of Rav Shlomo Zalman Auerbach zt”l). The Biur Halacha in 334:22 rules that Gram Hadlaka is permitted under certain circumstances which clearly indicates his view that it is only a Rabbinic violation.

EVEN ACCORDING TO THE OTHER POSKIM

However, the author of the Maaseh Choshev (Vol. I #30) disagrees with this view and considers even a delay in the switch as maaseh byadayim mamash – actual and direct action and thus would look at it as a biblical violation. Here too, one can make an argument that when the issue concerns a matter of even a small risk of life, the lenient opinions cited earlier in the Magain Avrohom can be relied upon. There is even another reason to be lenient — here we are dealing with two Mitzvos, not one, as explained by Rav Chaim Kanievsky Shlita.

When this author presented the case to permit asking a gentile to press the crosswalk button to some leading Poskim, the Poskim agreed to the underlying rationale. They also agreed that the leniency can be promulgated in their name. The Poskim were Rav Moshe Heinemann Shlita from Baltimore and Rav Shmuel Fuerst Shlita from Chicago.

Rav Heinemann Shlita added, however, that one should try to ascertain whether the person being asked is truly a gentile. Although one could perhaps rely on the majority of people that one comes in contact with in such circumstances are gentiles, there is also a principle of efshar levarer mevarerin, — when we can easily ascertain the facts, we do.

This article first appeared in the Five Towns Jewish Times.

Yair Hoffman is an educator and former pulpit rabbi who has authored several halachic works including Around the Year – a Guide to the Jewish Holidays.”